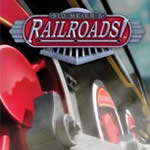 Trains captivate. Whether invoking memories of a simple layout under the Christmas tree, a story from a beloved book or scene from a favorite film, or the joys of watching your own children indulge in some make-believe railroading, trains have the power to fascinate.

Thanks to Sid Meier’s Railroads, that addictive allure is yours to enjoy — trainmaster or not.

Sid Meier’s Railroads is not your typical casual game. A “story element” is employed as each scenario is populated with historically accurate events. But, you won’t be rescuing damsels in distress, tied to the rails by a mustached villain. Nor will you be producing and delivering toys for Christmas. It’s basically a tale of building a great rail empire in which you manage trains, cargo and finances while engaging in corporate warfare with rival entrepreneurs.

Hmmm. Not sure if that shakes your caboose? Well, don’t surrender your boarding pass yet. While Railroads is a modestly in-depth economic strategy game, it’s also a great non-threatening sim for letting off a little steam.

Play modes are double-tracked: Competitive and Train Table. Competitive pits you against the computer or one to three artificial opponents. Or, if you prefer, you can compete against other gamers via a local network or the Internet. Four difficulty levels allow you to modify the challenge, while victory conditions consist of Monopoly, buying out your competitors; Goals, completing a series of set tasks in an allotted timeframe; or both. You can also adjust train routing complexity, as well as select randomized landscapes and city locations. Scenarios transpire throughout America (mostly), France, Germany and Great Britain.

Train Table mode, conversely, allows you to create a rail system sans competition, and time or financial restrictions. So, even if you’re put off by economic sims (the approach here is more lighthearted rather than a complicated business model), there’s plenty of fun on line. Whether you’re a casual player looking for something a bit deeper than the usual fare or a model railroad enthusiast, this diversion is fueled with entertainment value.

Sid Meier’s Railroads has its roots in the original Railroad Tycoon (available as a free download) released in 1990. Action transpires in real-time as you lay track, build depots, route trains, transport cargo and shuffle passengers and mail. It’s a simple click-and-drag affair with over 30 trains to run from primitive locos to ultra-modern diesels, each customizable via in-game tools.

Yet, competing against other tycoons is where the challenge hits the rails… and where things can get a bit complex. While the game tracks supply and demand, and inserts random events that can cause a boom or bust in one or more industries, you’re in control of your empire and need to decide wisely where to invest. With over 20 different goods on the manifest to harvest, produce and sell, and 30 unique industries such as lumber mills, refineries and power plants to operate, pressure builds quickly whether you’re a born industrialist or not. Moreover, patents and stocks demand consideration, as do the cutthroat tactics of your opponents.

Nonetheless, even if you’re a fledgling railway mogul, it’s manageable if you think big picture. For example, let details overwhelm you and you may spread yourself too thin. Focus on one segment of industry, like passenger and mail transport or lumber production, then expand elsewhere once your resources grow sufficiently.

However, a few derailments are inevitable. Its lone tutorial is too brief. Several training sessions focusing on aspects of play are warranted. And, while it’s easy to get started in Train Table mode, competitive play bears a higher learning curve. It takes several scenarios to figure everything out. Further, no undo command is provided to ease the correction of a track-laying error or back out of a bid, visual glitches appear randomly, system requirements are steeper than average and zoom range is too limited. You can’t gain a sufficiently useful aerial view or zoom in enough to see the action up close.

Derailments aside, Sid Meier’s Railroads is a runaway treat for simulation-strategy fans, as well as railroad enthusiasts. It’s also a great “next step” for traditional casual gamers. Although competitive scenarios can chug along for several hours apiece, Train Table mode allows leisure play for short or long whistle stops, making it perfect for just about anyone with more than a passing fascination in trains.