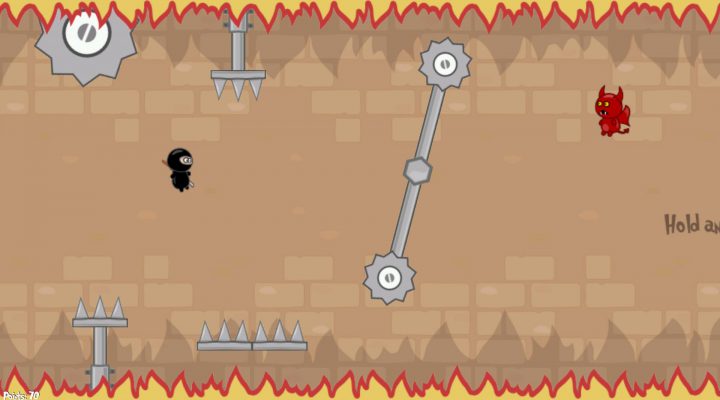 An original entry in the super-hard games genre.

The challenge level serves as a great reminder that games are at their best when they're not randomly generated.

The one incredibly well-designed challenge level made us long for more.

“Don’t judge a book by its cover.” It’s an age-old adage that we all know, but we’re all too quick to forget.

If you were to judge the game solely its Google Play screenshots, you wouldn’t give it a second thought. It looks crudely drawn and largely uninspired.

But once you scratch beneath the surface and give it a download, you’ll be pleasantly surprised with what you find.

A little bit Super Meat Boy, a little bit Flappy Bird, Shurican tasks players with controlling a bite-sized ninja as he attempts to navigate an endless labyrinth of death. Touch the flames above and below will result in instant death, so you’ll need to tap, tap, tap to keep the little guy jumping and alive.

The challenge comes in the form of the world you’ll be tap-tap-tapping through. Spinning saw blades, spiked platforms, and fireball-tossing devils litter the landscape; all moving around to create a series of hazards that ultimately proves impossible to navigate.

But hey — it’s a derivative of the endless runner genre. Nobody lives forever.

Double-tapping will cause your ninja to toss out a shuriken, and while handy for dispatching enemies, it also means you’ll jump that little bit higher and closer to the saw blades above. Even Shurican’s gameplay mechanics are trying to kill you.

In addition to the game’s endless mode, Shurican offers up a cleverly crafted “challenge” mode that asks you to completed a single, brilliantly designed level to see just how far you can really get. (My personal best is 49%).

In fact the challenge mode is so well-crafted that it makes me wish the game offered additional pre-designed stages, rather than just the randomly-generated stuff to be found in endless.

Shurican isn’t ground-breaking stuff. It’s not going to win any awards for presentation, and it’s not going to convert gamers who prefer warm hugs to blistering difficulty. Still, that doesn’t make this one any less a diamond in the rough. If you’ve been looking for another twitchy game that has you mashing the retry button, Shurican is it.

Godfire Review: Mash of the Titans

PlunderNauts Review: You Are a Pirate (In Between Breaks)