Shroomz: The Quest For Puppy Review 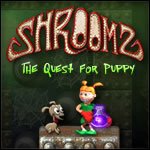 The developers would probably like you to think they called this game Shroomz because of all the tumbling mushrooms in the game. We suspect that it probably had more to do with the wacky mushrooms they were consuming while building this wonderful puzzler that won Billboard’s 2004 Web/Downloadable Game Of The Year award.

What else would prompt them to begin the game with an incomprehensible poem, a little girl named Bashful tumbling into a rabbit hole, and her need to find her lost puppy – cleverly named “Puppy”?

But none of this has anything to do with the gameplay that, as the saying goes, is simple to learn and difficult to master. The game’s primary task is to move downward, breaking through a sea of mushrooms. If you descend far enough, you’ll find your long-lost doggie. However, dangers lurk everywhere, and one misstep can bring a mushroom or a stone block or any number of objects crashing down on your head.

A number of easy-to-understand tutorials explain that the only way to reach your goal is to pick up and drink the scattered bottles of blue strength elixir.. Should the strength meter decline to zero, you lose one of your three lives. You can also pick up green jewels to earn extra points, although you must remember that the game’s purpose is to find your elusive puppy, not simply to rack up your score.

What’s so marvelous about Shroomz is that winning is based much less on luck than on a successful strategy. The full-screen playfield is massive and not being crushed depends in part on understanding the physics of the falling items; how some will tumble and others won’t, how four blocks of the same color will vanish and how breaking through stones takes longer than skirting around them. You need to make quick decisions to avoid being crushed, like should you pound on a stone to break through it (which takes time but may be the safest route) or zip around the stone (which may mean leaping out of the way of falling debris)? Each time you play, the game board is different so repetitiveness is kept to a minimum, making replay a joy.

To make matters more interesting, you can play the four tunnels – easy, normal, wicked, and hard – in any order you desire although, as one might imagine, it’s best to start with the easiest and then move on as your skills improve.

Could Shroomz be improved? Sure. The first step would be to change the music – quickly! Listening to Grieg’s “Hall Of The Mountain King” over and over and over again is like riding Disney’s “It’s A Small World After All”; there’s just so much you can take before you feel like your head’s about to explode. Fortunately, the music can be lowered and, thankfully, turned off.

In contrast, it would have been fun to have MORE sound effects than just the bloops and bleeps that exist now … along with our heroine’s yelling “Let’s go!”

As for the ending, well, we’re ashamed to admit that we still haven’t gotten that far. We’ve been stuck on the beginning of the hardest tunnel for what seems like ages with no victory in sight. Yes, we’ve used all three variations of bombs, taken advantage of the power-ups, and devised strategy after strategy – with still no success. If ever there was a game that nags you to play “just one more time,” this is it!

Our best guess is that there’s probably still one winning strategy that’s eluding us. If only we could get “Hall Of The Mountain King” out of our head, maybe we could figure it out.