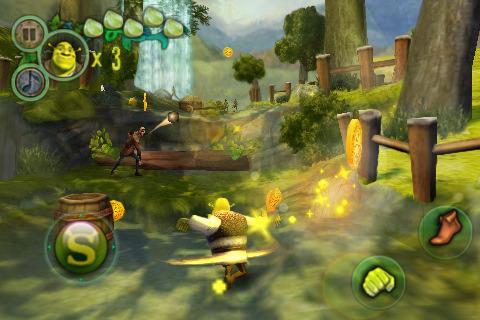 Shrek Forever After has finally arrived in theatres, which means that tie-ins are appearing everywhere. Not surprisingly, one such tie-in is on the App Store for the iPod Touch and iPhone, aptly titled Shrek Forever After: The Game. This game is faced with the daunting perception that licensed properties are often underwhelming, but Gameloft seems determined to buck this trend by producing a substantial offering.

The plot seems to follow the general story of the movie, where Shrek has been suckered by Rumplestiltskin into signing away his happy reality for one where Far Far Away is a very different place, one where Fiona is no longer married to everyone’s favorite cranky ogre.

Shrek Forever After: The Game is a pretty standard 3rd person platform/adventure game that will fill instantly familiar to anyone who’s played something like Crash Bandicoot or Spyro the Dragon on the original PlayStation console. Unfortunately, those games were much better-made and, subsequently, much more fun to play than this iPhone title.

Players control Shrek, Donkey and Puss in different levels. Movement is handled via a virtual joystick, while jumping, attacks, and special abilities are controlled with a couple of virtual buttons on the other side of the screen.

Shrek Forever After should have received another round of tweaking/polish before it was released in the App Store. There are a number of problems within it; none of them are dealbreakers on their own, but they add up to a fairly unpleasant gameplay experience.

The game’s biggest issue is that the platforming just isn’t much fun. Shrek has to jump over pits, dodge objects, fly through linear levels, grind down slopes, and jump onto difficult-to-reach platforms in order to pick up coins that are scattered around each level. These are all standard elements in such a game, but they start to feel repetitive fairly quickly.

What’s even more frustrating is the rather buggy mechanics. Falling into a pit isn’t all that difficult, partially because Shrek will sometimes disappear over the edge if he just happens to be standing a bit too close to it. This isn’t the only such problem in the game: random spots appear in a level where Shrek can fall through the landscape and a life will automatically be lost. Admittedly, these spots are few and far between, but they were a noticeable irritation.

Platforming isn’t the only buggy aspect of the game: even the brawling is problematic at times. It seems like attacks will sometimes fail to connect with enemies; punches will sometimes pass right through them without making any contact. 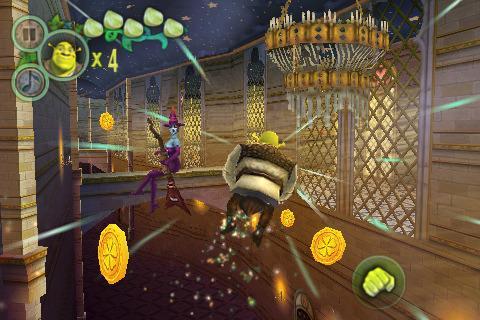 Still, not everything in the game is frustrating. The graphics look really nice on the iPhone’s screen: characters animate well and the levels are certainly impressive, though enemies’ appearances are somewhat basic and often look too similar (a particularly disheartening example of this is a boss battle where the boss is merely a larger version of previously-encountered enemies).

The game’s voice actors do a great job of imitating the film’s stars, and the writing is a lot funnier than one has any right to expect from a movie-licensed game. The humor and its delivery almost manages to offset the various shortfalls you’re likely to encounter, but it doesn’t quite pull this off.

Shrek Forever After: The Game isn’t a bad game, but it certainly isn’t good enough to recommend as a purchase, either. Sure, it’s funny, but there are too many problems in the game; too many flaws that could have been easily corrected with a little more polish.