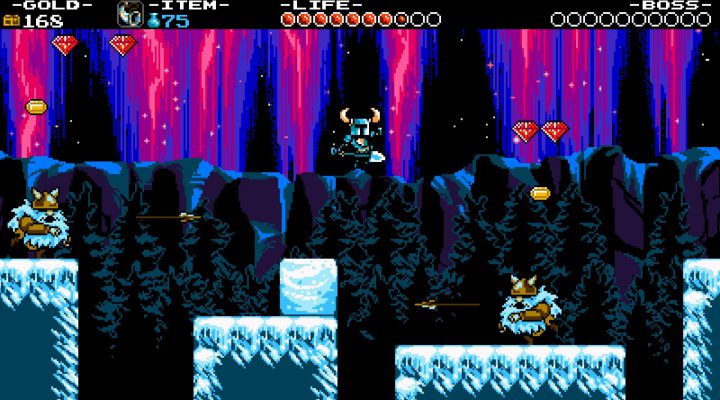 The genre of platformers inspired by retro games is a rather crowded one, yet somehow Shovel Knight manages to stand out. How? Because of its authenticity: it knows its heritage, but is designed in such a way that it’s not just about mimicking classic games, but about paying tribute to the fun and memories that NES-era games provided.

It’s easy to pick-and-choose the various bits of Shovel Knight that come from other games. Mega Man serves as the greatest influence on this 2D action-platformer. The structure of eight bosses come straight from Mega Man, as do the different relics that have powers inspired by them. Even just the way that the characters move, and the way that levels are laid out, feels like Capcom’s series.

The world map is straight out of Super Mario Bros. 3, replete with wandering enemies that can be fought for rewards. Shovel Knight’s shovel weapon is, well, unique, but it functions kind of like a sword, with the ability to pogo off of enemies like in DuckTales. The relic that tosses an anchor in an arc up in the air? Yeah, that’s basically the axe from Castlevania.

But to pick apart the game as various parts cobbled together from different games discredits the way that it all comes together. The game doesn’t necessarily use the Mega Man weapon weakness chain; relics are just handy tools, and actually optional. They serve as things that need to be found and bought in each level. Sure, the anchor might help against bosses that prefer to fly about, but it’s not a prerequisite, and it won’t suddenly do massive amounts of damage.

The levels also contain loads of secret walls and paths to discover. They’re very common, so the game trains the player to keep an eye out for walls and anything that looks like it could contain a secret. The shovel pogoing is used for both variety in fights and in platforming sections. The map structure combines both the best elements of non-linear progression with the guiding that can come from being guided, as there are multiple bosses available to be fought at any one point. 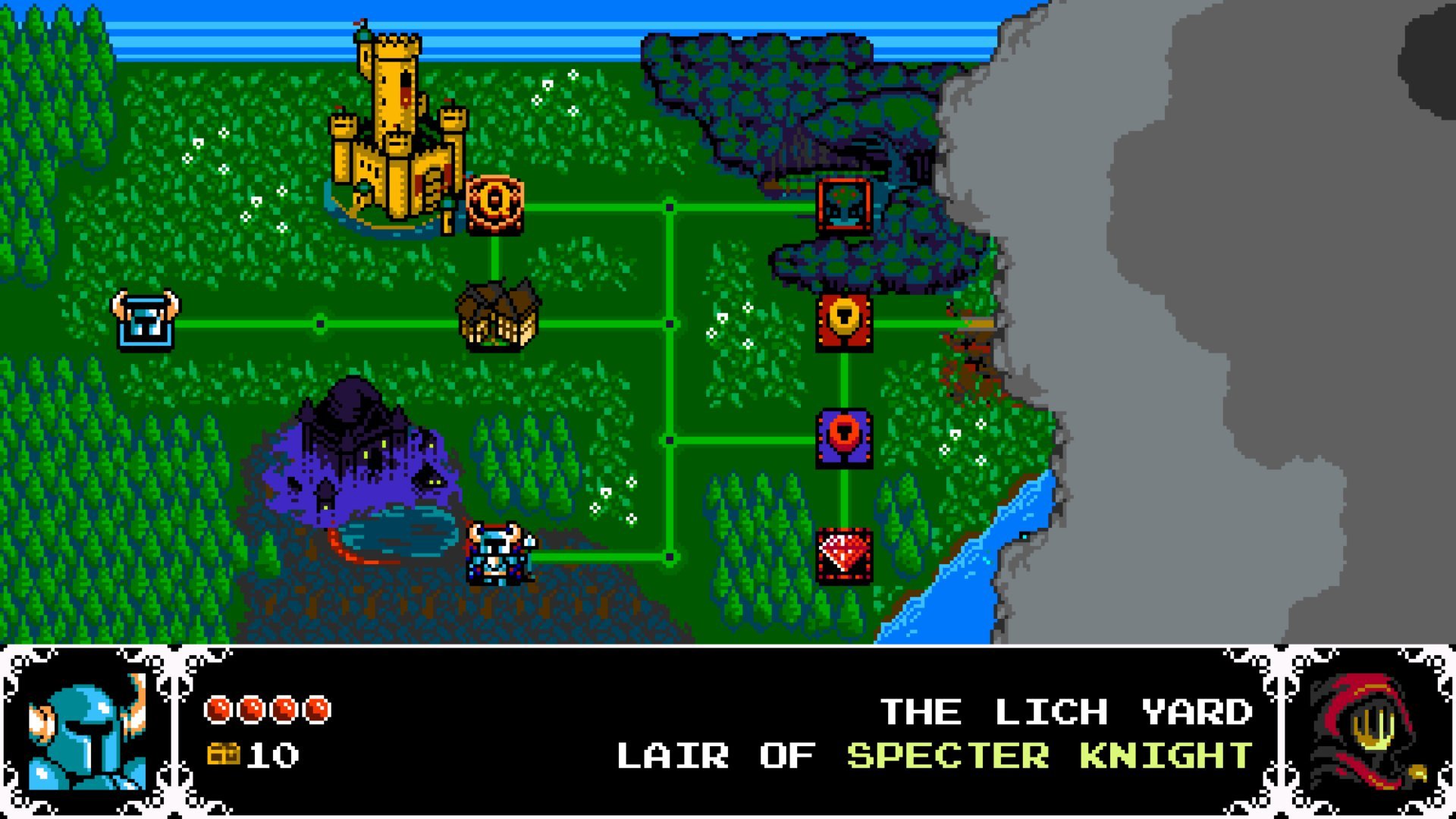 Even the relics wind up being more of a useful tool than weapons used to make boss fights very easy, with the need to conserve them. There’s a shared energy meter for the relics, with frequent refills, so I never felt afraid to use anything in levels or in battle. The temporary damage shield winds up being a very clever tool that makes platforming and enemies a lot less frustrating, particularly as it can protect from spikes.

What it boils down to is that Shovel Knight pays homage to many games, but they serve a particular purpose. They’re merely common ingredients in Shovel Knight’s unique dish. That the game also really goes for the NES-authentic feel with the low-resolution visuals and Jake Kaufman’s chiptune soundtrack helps, and makes it clear why this game was meant to be on Nintendo platforms. But the game is also widescreen – as Yacht Club Games’ David D’Angelo explains in a Gamasutra article about the game: “[W]e decided to eliminate any drawback that would hamstring the gameplay experience.” This is speaking technically, but it speaks to the game as a whole. 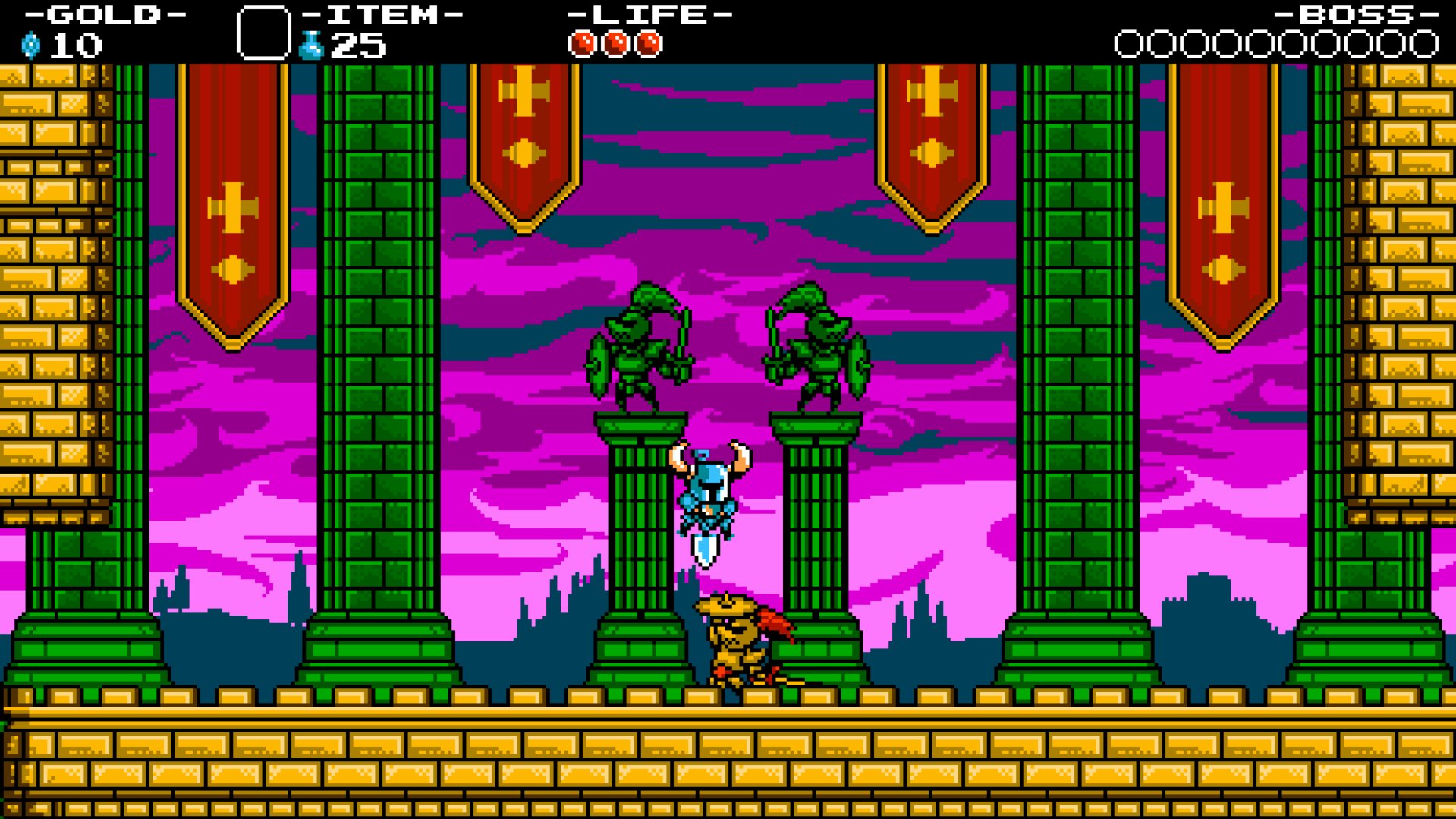 That holds true with the difficulty as well.

I admit that I expected this to be the next great neo-retro brutal smackdown. I backed the game on Kickstarter last year, but must not have been paying too much attention to the backer updates, because this game was shockingly easy. I mean that in more of a relative sense – I died 127 times – but for a game that pays tribute to Mega Man, it’s about a hundred times easier. There’s checkpoints galore, and unlimited lives: the only penalty for dying is going back to the previous checkpoint and losing 25% of collected money, which can be re-earned by collecting the money bags floating around at the death spot. This game is really quite forgiving.

The difficulty is a bit disappointing in that the boss fights wind up not being these grand climaxes, but actually just small obstacles, especially since it’s not difficult to extend the health limit, and the Troupple King’s ichors for refilling health and getting temporary invincibility can make any particularly difficult section conquerable. Even the obligatory boss gauntlet in the penultimate level (if this is a spoiler, go play more Mega Man games) isn’t that difficult because of the health refills given after each defeated boss. I literally beat it on my first attempt. The final boss winds up being a bit of an anticlimax because when I have as much health as they do and can refill to max twice, it winds up not being much of a threat. 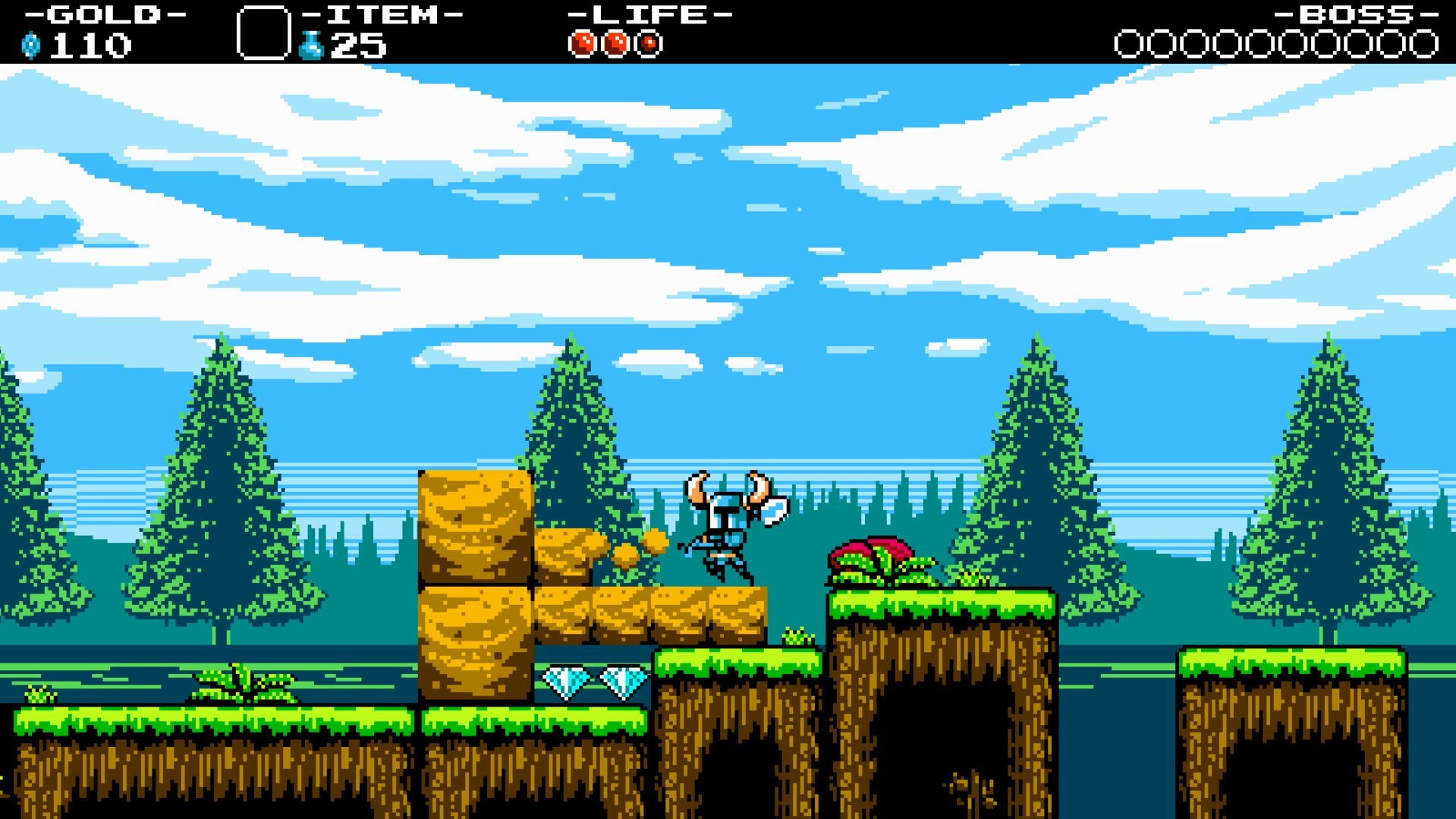 But to a certain degree, it’s characteristic of what Shovel Knight is aiming for. It picks and chooses which parts of retro gaming to use for itself, and while I suppose it would have been sweeter if boss fights were more difficult, it also means they weren’t frustrating, and the fights were always a ton of fun, with giant bosses and ones that liked to jump around. And I can’t say that I didn’t have fun because the game was easier than I expected; it just might have made the rewards sweeter. But then that’s what the New Game+ mode is for, I suppose.

So while I perhaps am conflicted as to the level of challenge in Shovel Knight, I had a ton of fun with it. It’s a gorgeous game in its 8-bit ways, the soundtrack by Jake Kaufman is fantastic, the game manages to celebrate its absurdity but also take itself seriously when it needs to, and there’s just so much to appreciate. This is a game made by people who care about the games of the NES era in a fundamental way, and wanted to pay homage in clever ways to create a new cohesive whole. This is a new gold standard for neo-retro platfrmers.