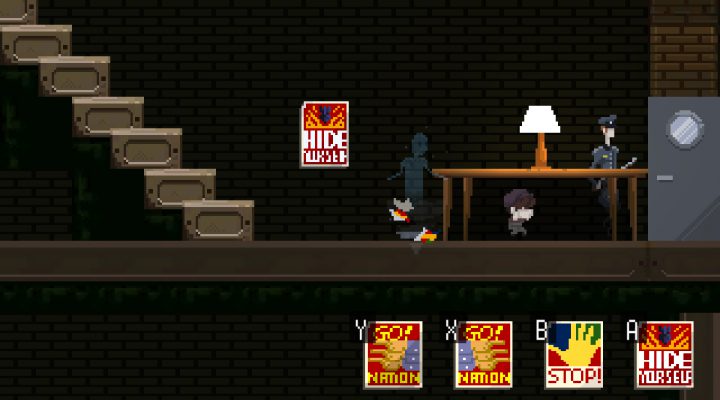 Some great visual styles and presentation

No real unique gameplay to speak of

A curated collection of short games is an excellent idea, and although it’s been done a fair bit on other formats the Switch hasn’t been treated to many.

So it’s a shame that this effort from publisher Nerd Monkeys is more strange than spectacular.

There are five games in this collection, and the first – ​​Swallow the Sea – offers up a Katamari Damacy style experience. You play as an underwater organism desperately trying to grow larger and larger by absorbing smaller creatures – and avoiding enemies until you’re large enough for them to start running from you.

A terrifying foe is introduced around halfway through, but the game just feels a little too uneven. From the frustrating choice to have the screen shrink when you take damage (this can often prove fatal) to occasionally unpredictable enemies it never quite takes off like you’d hope.

Second is The Good Time Garden, which is the strangest title here. Which is saying something. Effectively a 15 minute fetch quest, you play as a strange troll creature who ends up needing to feed a sentient bulb monster. His desired delicacy? The young children of all the characters that inhabit the garden.

This excellent set up is bolstered by an eye-catching hand-drawn artstyle, and characters that can only be described as bizarre. Everything is intentionally awkward and sexually charged, but sadly the puzzles are incredibly basic – usually requiring you to simply slap or water an object/character, with no real involving conundrums in sight.

Next is A Game Literally About Doing Your Taxes, which is incredibly short but (again) has little in the way of compelling gameplay. You simply move papers to the left or right – choosing whether they need to be filed or thrown away.

Your choices don’t really matter too much, as it leads into a creepy ending regardless. We felt this type of experience had been done far better elsewhere, but it admittedly still left an impression.

Fourth is Ghostein, possibly the best looking game of the collection. Based in a concentration camp during WW2, you must help your son escape.

Being a ghost you can only interact with him by placing posters on walls however, which tell the boy to move right, left, stop, and hide.

The gameplay is very basic, and there’s little variation present – but the atmosphere the game creates is impressive, even if the glut of typos in the final text undermines its message a tad.

Finally there’s Uranus – which we found to be the least satisfying of the five games. Largely as we could never get a firm handle of what was going on – you control an eyeball moving around a sphere, and have to avoid the other eyeball circling around. There’s no narrative hook, and despite the trippy visuals we found the whole thing a bit empty.

Overall there’s a common problem with the titles in Short Games Collection #1, and that’s they tend to ignore offering interesting gameplay in lieu of just weirding you out. For the asking price we think you should expect to get both – and that’s what we hope to see in future entries in this series.