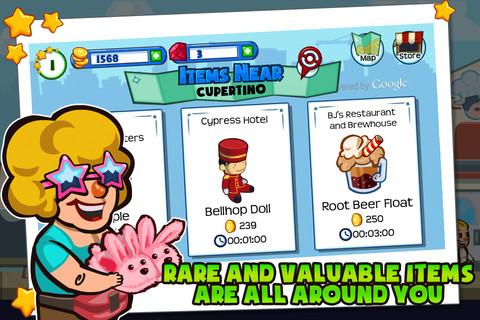 Shoptown is simple, yet addictive and fun.

Wild Needle has recently come out with a simple iOS game for kids named Shoptown. It’s an easy game that revolves around buying and selling of goods with the intent of reincarnating the spirit of home-grown business. Peppered with some curious location-based concepts, it’s a game that feels like it’s trying to do more with itself, but its uniqueness does not stretch far past appearances. Nevertheless, Shoptown has an oddly compelling nature, with the only notable problem being its slow pacing.

In Shoptown, a small town has been taken over by a corporate fat cat by the less-than-subtle name of “Fat Ralph.” This sullen-looking character has driven the town into the gutter with his worn down locales and decrepit storefronts. In order to save everything, players take on the mantle of a chirpy entrepreneur who must make enough revenue at a handful of stores in order to buy them back from Ralph and save the town.

Starting off with little more than a street-side vendor stall, users are tasked with filling up their shelves with items purchased from an in-game store. These are simple knick-knacks such as teddy bears, food products, hats, and so on, which are sold at a price determined by the player. Once the store is stocked, it can be opened for a small fee. Over the course of about 30 seconds, goofy little patrons will meander on in to take their pick of the wares. Depending on what price the goods were set at, they’ll either buy it instantly, ignore it, or try to negotiate.

During negotiations, customers will make a low offer, and the player can select a price they’re comfortable with via a sliding bar. Should the customer still be unable to afford it, they’ll give the player one more chance to lower it closer to their price range before giving up. Once all the revenue for the day is collected, it’s time to restock for the next day.

This is where some of Shoptown’s location-based gimmicks come into play. Depending on where you’re located, the iDevice will pick up nearby business from which more “rare” items can be found (such as a toy ambulance from a hospital). The items function more or less the same as any other, but can occasionally turn a better profit. Moreover, sometimes users will find a “special” item at these locals that can be ascertained by posting it to Facebook. Regardless as to whether or not items are bought from a special location-based vendor or the normal in-game store, though, they’ll still take a good chunk of time to deliver. 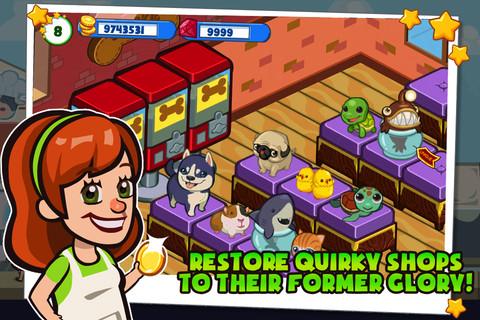 Since Shoptown is a free-to-play game, this is where the monetization happens. At minimum, items take around 15 minutes to deliver, with more profitable ones taking longer. In order to expedite this, virtual currency need be spent. What makes it even more obnoxious, though, is that the “delivery truck” can only hold four items at a time unless premium trucks are bought. Conceptually, this isn’t so bad, as the game can still be played, but the problem is that play sessions only consist of about 30 seconds to a minute before deliveries have to be waited upon again.

If players to spend some cash, or are the patient type, then the app is fairly rewarding. As revenue is earned, players are able to upgrade their business from Ralph’s former run-down shack into a shining modern store. Once all the upgrades are purchased, the property itself can be bought, which will then allow for regular income to be earned from it periodically. Initially, there are only four of these locals to own, but as time goes on, users will be able to expand their business empire even further.

Shoptown is gratifying to play. It’s not too complicated, and it’s nice to watch your business evolve from nothing. The location-based mechanics are a decent addition too, even though they don’t really seem as sophisticated as Wild Needled might have planned. Truthfully, the only real issue with the game is that play sessions are just so absurdly short, and players frequently find themselves waiting for deliveries just so they can perform a little more business.