Home / Reviews / Shooty Skies Review: Up, Up, and Away 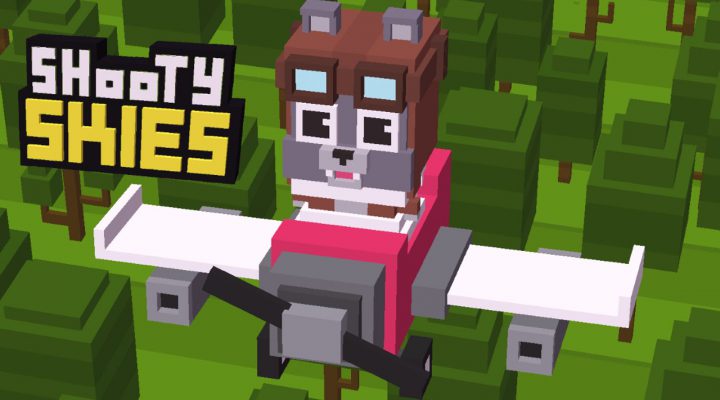 Can be difficult to tell enemies' projectiles from your own at times.

Let’s say you’re Hipster Whale. Let’s say you make an endless arcade-style hopping game in the style of Frogger. And let’s say that game becomes so popular, it directly influences how future mobile games are developed.

Simple. You take to the skies.

Shooty Skies isn’t technically a Hipster Whale title. It’s put together by Mighty Games, a team that includes Hipster Whale’s Matt Hall and Andy Sum (and, on this project, is led by fellow Australian Ben Britten).

Unsurprisingly, Shooty Skies’ visuals are obviously meant to pay tribute to Crossy Road‘s chicken-hopping adventure. You can even collect pilots who debuted in that game. Presumably they took some crash courses on flying — emphasis on “crash”. 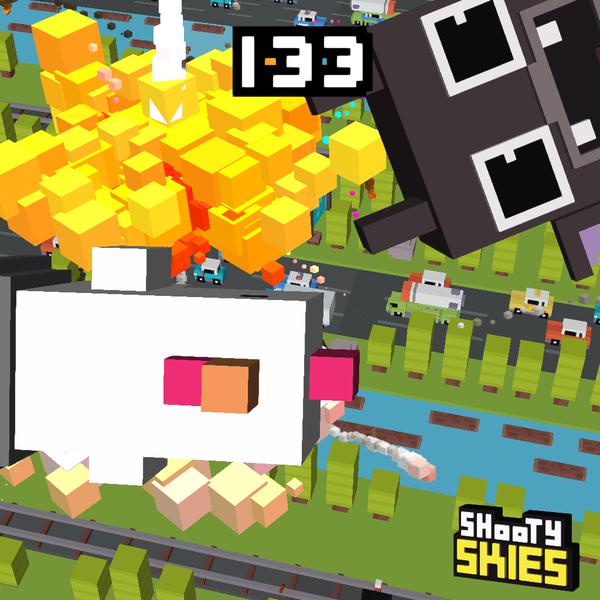 But Shooty Skies plays very differently from Crossy Road. You start each turn behind the yoke of an airplane, which you control by dragging your finger across the screen. You fire automatically as you fly, but your default shots are fairly weak. However, when you lift up your finger, you charge up a shot that unleashes a barrage of missiles when you put your finger back down.

Shooty Skies’ “shoot-or-charge?” question is part of what makes the game so intense. Your standard guns are weak, but its constant stream of bullets generally keep you safe from smaller enemies. If you opt to charge up, you leave yourself unable to move and very vulnerable as a consequence — but the powerful burst that results can wind up saving your kitty-bacon against tough enemies, especially if they’re flanked by smaller guardians. 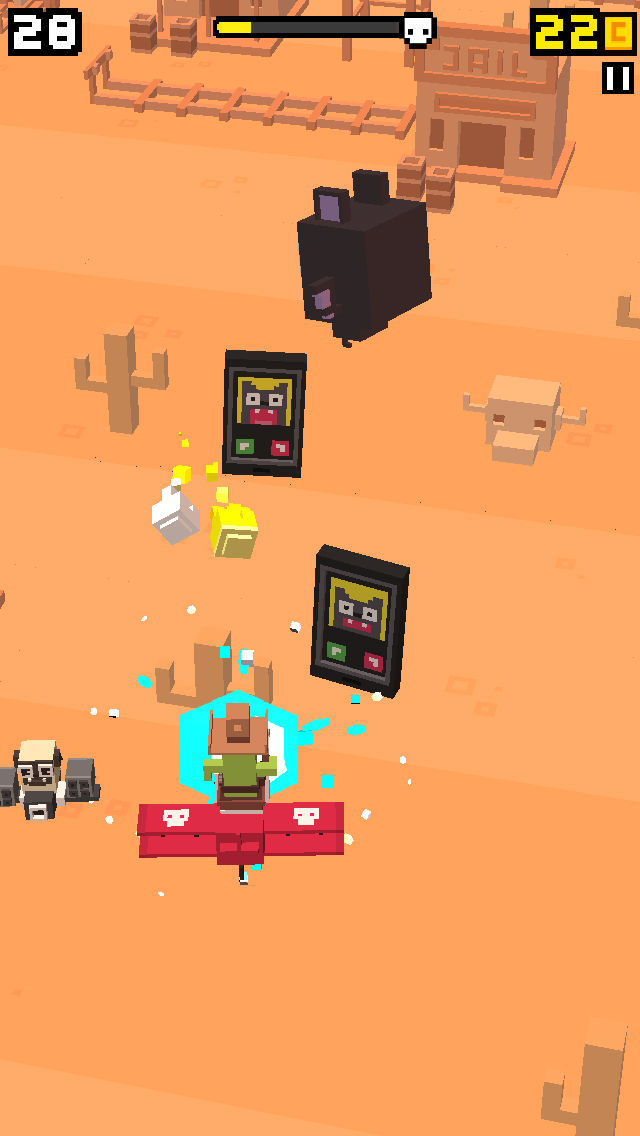 Traditionalists will be happy to know Shooty Skies also offers a host of gun power-ups and pilot options. You can shoot present boxes that contain better guns or assistant pilots who add some extra firepower from your wings. Even better, said wingmen are actually rabbits, geese, and pugs.

If it’s not obvious by this point, Shooty Skies doesn’t take itself seriously, at least as far as its visuals are concerned. Everything’s bright and blocky, the pilots are cute and funny (and collectable via coins, very much in the same manner as Crossy Road’s characters), and the enemy roster contains flying arcade machines, cat videos, and toasters.

That’s not to say Shooty Skies is a pushover, though. Things get sweat-inducing pretty quickly. It’s not exactly bullet hell territory — your pilot is a bit too bulky for those kinds of acrobatics — but projectiles and enemies fly thick and fast. Gift boxes appear frequently too, and you’re often torn between playing things safe, or diving into a cloud of projectiles to retrieve your goodies.

When things are at their busiest, it can sometimes be difficult to determine what’s safe, and what’s actually enemy fire. You need to learn how to separate the two, but thankfully it becomes pretty easy once you’ve had some practice.

If you love Crossy Road, or if you’re enthusiastic about arcade-style games in general, don’t hesitate to download Shooty Skies. It’s fast, it’s frantic, and most importantly, it’s fun. In fact, consider putting a leather pilot’s hat and goggles on your cat to celebrate the game’s release. Just be warned that we’re not responsible for any injuries inflicted on your person during the process.