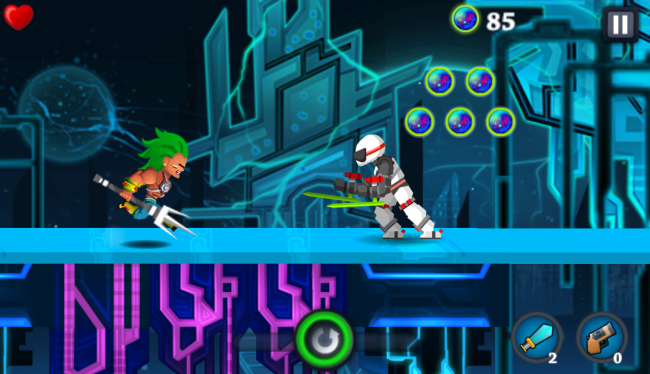 Running and rewinding through the ages

Shiva: The Time Bender, the new endless runner from Tiny Mogul Games, works well as an introduction to the genre, but its lack of difficulty and shallow gameplay could turn off seasoned fans hoping for more substance.

In Shiva: TTB, time may be the only thing on your side, as legions of enemies from history’s most pitfall ridden locations do their worst in an attempt to thwart a punk rock caveman from capturing a plethora of crystal orbs littering the timescape…or something like that. The narrative isn’t very important here, but it does tie in nicely with the game’s main mechanic.

The gameplay here is pretty standard stuff. Shiva – your player character – jogs, hops, and slays his way through time and space, all the while collecting brightly shining orbs that can be used to upgrade his appearance or weaponry by using the in-game market.

The controls should be instantly familiar to anyone who has played an endless runner for a decent length of time: Tapping the left side of your touchscreen causes our green haired protag to hop in the air, and tapping the right side causes him to swing his mighty trident at any manner of foe that stands in his way. And what happens if he misses one of those swings or jumps? That’s where the Time Bender mechanic comes into play.

Similar to later Prince of Persia games, by holding a “time reversal” button placed in the middle of your touchscreen, Shiva can rewind the game to a point before you made your fatal gaffe. But do be careful with your timing, since usage is not infinite, and you may find yourself rewinding to a point between two certain death events, which could send you in a death loop that lasts until your time meter runs dry and causes the level to restart.

In the lower right of the playfield, you’ll also find three virtual buttons that hold additional weapons that you can buy from the market, which include a bow and arrow, a pistol, and a slashing sword. These are long range weapons that add ease to an already easy game, but they don’t last forever.

Graphically, Shiva: TTB resembles something from an early Amiga computer game – bold, stylized, and neon infused. The time periods you run through (which include an antediluvian abyss, a classical period, a war-torn steam punk era, and a cyberpunk hell) are rendered well. Unfortunately, the main character is the least interesting sprite on the screen. In a world filled with laser sword-wielding skiers and flamethrower packing steam punk infantry, I was expecting something with slightly more pizzazz.

You can change him up a bit through accessories available via the marketplace, but more customization choices would have been nice. Also, it doesn’t seem like the artists took full advantage of the kind of setting they’ve created, since each level has only a few different enemy types. More variety would have gone a long way. 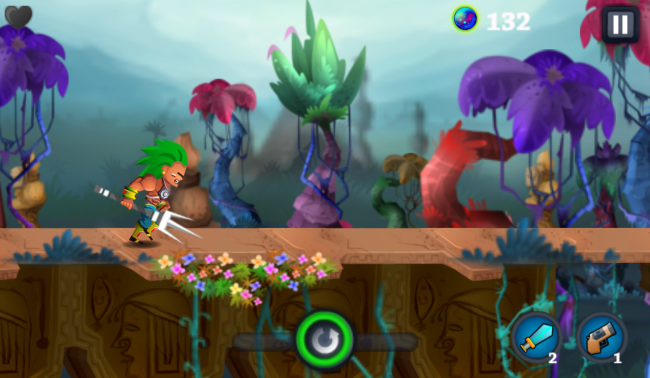 Sound wise, the game comes off a bit better. The music is nice and energetic, and you can tell that the composers really tried to appropriately match it to the fantasy time periods represented here. The sound effects could use more oomph, though.

Shiva: The Time Bender isn’t a difficult game, and even if you do make a mistake or two on your journey through the fourth dimension, you always have that handy “rewind” button at your disposal. If you’ve already played an endless runner or two, you might want to skip this one. But if you’re new to the genre, or you’re looking for a game to keep the kids busy for a while, you might find that this one is worth your time.