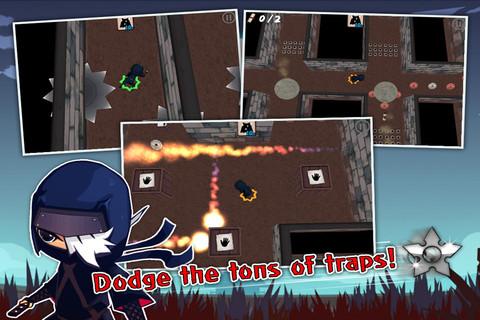 Ninjas are meant to be stealthy dealers of silent death. However, if they’re anything like the characters in Shinobi ZIN then you can likely see them coming a mile away and dispatch them with minimal difficulty. What starts off as a promising action-puzzler quickly collapses under its own weight as it tries to be too clever for its own good.

The basic controls of Shinobi ZIN are simple, and if implemented well could have created an incredibly entertaining game. Movement is simply a matter of touching the ninja and drawing a line where you want him to go. Once you lift your finger the little guy sets off, and you can stop his movement by simply tapping the screen. It’s also possible to make the ninja crawl by tapping him, which allows for sneaking past guards behind low-lying obstacles and shimmying over movement-sensing traps without setting them off. Players can also trace lines into enemies to attack them, but with this being a stealth game, frontal assaults are absolutely forbidden.

Even though the controls seem smart at first glance, it only takes a few levels to begin noticing the shortcomings. First off, your ninja isn’t very smart, so if he runs into an obstacle on the way to his objective he’ll likely just get stuck there, running forever into a box or bag of rice without ever making it any closer to his goal. Sometimes though, smacking headlong into an object is part of a strategy, such as in the case of pushing boxes. Rather than including a simple animation for these moments, the ninja just smashes into them face first and pushes them out of the way with his head. It would be funny if it weren’t actually kind of sad.

The other problem with the control system is that adjustments are cumbersome and mid-route adjustments are impossible. In order to change directions midstream you have to stop the ninja then draw a new line, which often doesn’t work when an enemy suddenly shifts his patrol and is about to spot you. It may seem like a nitpick, but once you’ve failed the same level a half-dozen times because of poor routing you’ll feel the rage.

The game’s other great pain is a camera that’s far too zoomed in and refuses to back off. While you can use the iPhone’s pinch feature to zoom the screen out temporarily it snaps right back into the original frame as soon as you remove your fingers, making it nearly impossible to plan routes or execute your moves with any sense of timing. There’s a similar feature where you can move the screen around to look for danger, but once more the camera centers right back on the ninja once you move your finger so it’s practically useless. Last but not least, limited view means limited mobility, and your character can only go about a dozen steps before you’re forced to draw a new route. Forget any hopes of a flowing, elegant run through a stage, such things are impossible.

Shinobi ZIN has all the elements of a fun game, but shurikens itself in the foot with terrible execution. I really wanted to like this one, but it seemed like practically every level it did everything it could to make me put it down and never play again. Most of the poor elements could be fixed with an update, but unless they are, this remains a game far more irritating than it is fun.