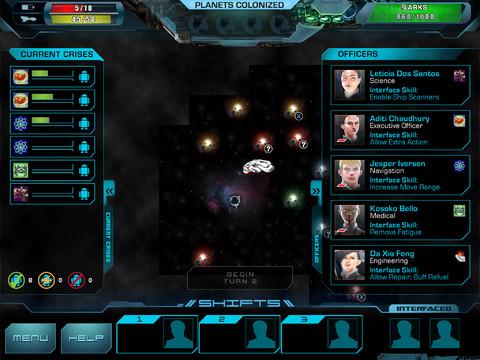 Shift work can be more exciting than it sounds.

The number of science fiction games that post you as the last surviving remnant of an apocalypse that destroyed the human rate are numerous beyond counting. This time your mission is to terraform planets so that humanity can begin anew. So far, so ordinary. But a hackneyed setting doesn’t have to lead to a bad game.

Shifts is a resource management game in which your ship explores an uncharted sector of space, trying to find four habitable planets before running out of essential things like fuel or hull strength. You are constantly beset by crises of various kinds to drain your totals. Your job is to manage the working shifts of officers to ensure that someone with the right skill is on-hand to tackle the current crises. But working fatigues your crew, so some have to be rested whereupon they offer a special ability affecting the whole ship.

Once you’ve chosen three officers to work and two to rest, you get to carry out actions on the sector map. This basically means moving, scanning unknown space, carrying out repairs and exploring planets you discover to see what you can find.

Shifts is simple to learn—although a patchy tutorial doesn’t get things off to a good start—but very hard to play well. Balancing the requirements of the ever-expanding crisis roster, the ever-tired crew and the ever-depleting resources offers a tremendous puzzle, the parameters of which change every turn and to which there is no optimal solution.

On top of that you’ve got to actually move the spaceship and explore. And it’s here that what initially appears to be a clever and gripping game begins to show some weaknesses. The map isn’t small, your ship isn’t fast and the distribution of habitable planets amongst the vacuum is random. If the earth-like planets you need to find just so happen to be at opposite corners of the universe, your chances of victory are close to nil before you’ve even made a decision.

After a few games a sense of deja-vu tends to set in. It’s always a pleasure to see a game make a complex situation out of simple mechanics, but bare-bones rules doesn’t leave the designers much scope to add narrative or variety on repeat plays. They’ve tried: exploring empty systems can turn up robots, fuel dumps, tech upgrades and even clues as to where you need to travel. But ultimately it all boils down to modifying a small number of trackable resources, and it starts to show.

Functional but unspectacular graphics and sound don’t help with the sense of narrative, either. But the fact the game is accessible, quick-playing and absorbing helps a lot with making up for these faults. You can forgive the occasional unwinnable setup when you know you’ll be spending half an hour as an absolutely maximum struggling against the inevitable. The fact it’s got that itchy, addictive quality that keeps you pressing buttons is an added bonus.

Saving the human race from extinction ought to be a tense experience, and Shifts does a good job of capturing that feeling of desperation. There’s no difficulty setting other than the default, which is “extremely tough” and in this instance that’s just the way it should be. The final lunges for that fourth victory planet can be marvelously excruciating. But it’s not for the faint-hearted. You’ll lose a lot of games on your path to victory. And there, the lack of variety or engaging premise is going to hurt, putting off uncommitted or casual players. 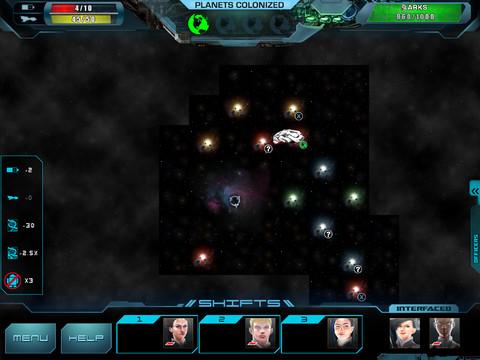 If you’re up for the challenge, and prepared to overlook a few rough edges, you’ll find this game to be an interesting and rewarding experience. The unfortunate clash between hard strategy and random setup is a fairly serious black mark, but the other flaws in the title are relatively minor once you get stuck in.