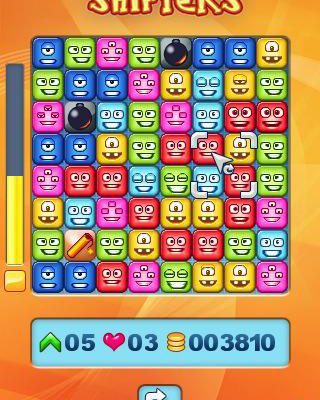 The only way that a match-3 game can stand out from the pack these days is to not only be well-made, but to be a little different as well. Thumbstar Games seems to be aware of this challenge, so the developer has created a new entry for this genre, Shifters, that has a little bit of a twist when it comes to play mechanics. The end result is a game that is simultaneously cute and challenging, if only a little flawed.

The basic gameplay is rather similar to Bejeweled: players are presented with multi-colored blocks covering a grid. In the default play mode, you’ll have to match three (or more) blocks at a time in order to remove them from the grid, which causes more blocks to drop down from the top of the screen. When you’ve achieved enough points, you advance to the next level. Simple enough.

In order to rotate the blocks, you tap on parts of the screen and a cursor selects a square of four blocks. If you tap on the top left block of the highlighted group, they rotate in whatever direction you want them to. The rotation direction is determined via an icon on the bottom of the screen, which players can tap on to change from clockwise to counterclockwise. The goal is to take out a string of at least three blocks, but four or more will reward players with a bomb that will clear the surrounding area once it’s activated. 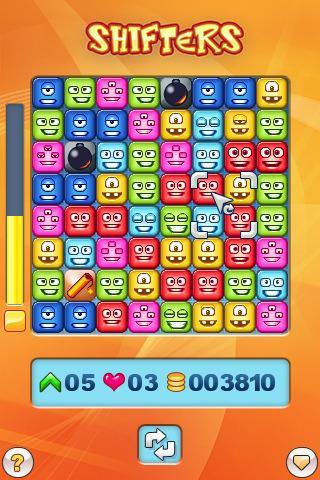 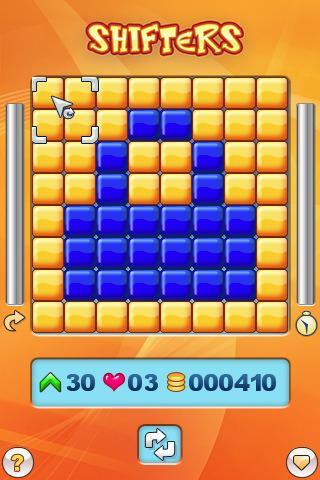 Each new level brings a different goal. In one level, you might have a score to meet. In another level, you will be told to rearrange the blocks so they form a predetermined shape. While in the level after that, you might be asked to pull off a required number of certain match types. Every level is its own minigame.

It’s all rather fun, but there is a small problem with the game: rotating the blocks doesn’t always work because your tap will move the cursor’s position. This happens less often as time goes on and one gets used to the gameplay, but the problem is that the blocks are small enough that hitting only one of them can be a difficult task (especially if you have an essential tremor in your hands, like I do).

The game’s graphics are certainly cuter than one might expect: on regular levels, each block has a quirky little face drawn on its front. This may sound a little silly, but it’s actually kind of adorable since each of the faces is independently animated and each color sports a different expression.

Music, meanwhile, is a relatively simple affair, but one with its own sort of charm. It actually seems like the type of soundtrack that one would find if they were playing a puzzle game on a 16-bit console like the Super Nintendo or the Sega Genesis. The sounds seem like they’re high-quality MIDI files, with instruments that sound somewhere between realistic and digital.

Shifters is a quirky little puzzle game that manages to keep things feeling fresh by never making you do the same thing over and over again. It’s certainly cute, and the difficulty manages to increase by reasonable steps as you progress through the game’s fifty levels. Overall, it’s both enjoyable and challenging; the one problem is that it the challenge sometimes comes from frustrating controls than difficult puzzles.