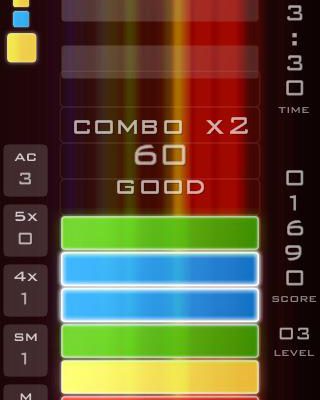 It’s not hard to imagine that those behind Shibuya probably thrive on a sense of order. A trip around their respective abodes would no doubt uncover neatly stacked book shelves, DVDs all stood up in alphabetical order, and dirty dishes washed, dried and put back in their cupboards within seconds. In short, Shibuya is an OCD sufferer’s paradise, effectively playing the role of that pile of rubbish that you never quite finish cleaning.

If that sounds like your idea of hell, then fear not. Even if you’re the kind of person who comes out in a rash at the mere thought of tidying, there’s still plenty to enjoy here, because this is effectively a puzzler for all abilities.

Its universal appeal is partly aided by its simplicity. Your job is to tap rectangle shaped blocks that begin to stream down from the top of the screen to fill them with colour. The idea is to stack up the matching blocks in groups of two or more, tapping them again once they’re at the bottom clearing them from play. 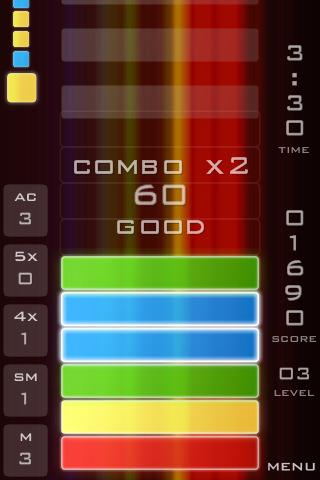 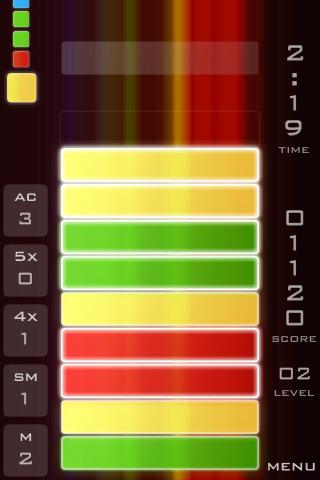 The problem is you have no control over just what color is next in the order. As such, you have to fill in the blocks strategically, leaving spaces to accommodate colors further down the line, with Shibuya letting you see the next four colors due to come your way.

Just how attainable this all is depends on the mode you opt for and, most crucially, which speed you dare to take on. In quick play mode, you’re simply given 2 minutes in which to hold out, with building up the best score possible your only target.

Doing so relies on your ability to string together combos, with clearing blocks in groups of five or more unlocking multipliers that can send your total sky high.

It’s Shibuya‘s endless mode, however, that’s the meat of play. As you might expect, here the blocks just keep on coming, with the game only coming to an end when you finally lose control and the rectangles stack up to the top of the level. But rather than simply serving up a one-size-fits-all style challenge, just what sort of test this represents all depends on the speed of play.

With five different tempos on offer, it really is possible to tailor Shibuya to your own ability – and it’s not an exaggeration to suggest that the whole feel of play changes as a result, either. Play it at pace, and Shibuya is all about reactions, with the game almost acting like a typewriter trainer – one wrong tap and its game over.

Slow things down, however, and this is very much a thinking man’s game, with moves only made after what feels like an age of consideration. It’s almost like chess, with every eventual possibility evaluated as the blocks make their way down the screen.

What’s especially clever about all this is that slowing the speed down doesn’t necessarily make Shibuya any easier – it simply accommodates a different kind of player. There’s every chance that those quick off the blocks will struggle when the game runs at a snail’s pace, while those who need time to think will have no chance at top speed.

Either way, both types of players will agree that Shibuya is something special. Though it does away with the idea of levels and is, at least superficially, a rather short package, there’s just no denying how addictive the simple task of stacking blocks can be. Games might only last a matter of minutes, but there’s every chance playing just once will never be enough.