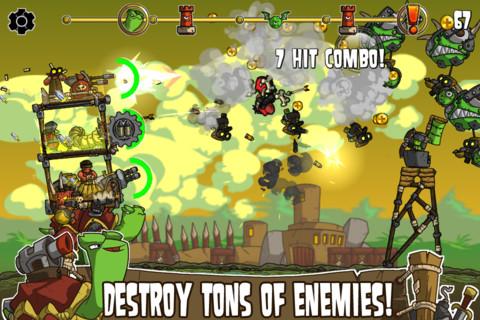 It’s safe to say most people are familiar with the tale of Animal Farm, the classic novella from George Orwell that imagines the uprising of four-legged figures against their upright-standing oppressors. The revolution begins to crumble thanks to corrupt leaders and fatally flawed individuals within the group. Had the turtle from Shellrazer been part of that Orwellian tale, there may have been less of an uprising and more of a military coup. The hard shell and harder attitude of the war turtle in Shellrazer makes the pigs of Animal Farm look like Ghandi. But will it be enough to shoot up a solid score or is this outer shell too soft to withstand the barrage of other great iOS titles?

Shellrazer is not shy about its ridiculously over-the-top style. You play as a Klang Clan War Turtle on a journey across enemy territory. The reason? You’re a lonely turtle that wants a lady friend. The problem is that all of the females of your species live on the opposite side of the continent. So, you strap some firepower on your back and make your way to your lover for, presumably, some shell-bumping. The entire back-story is presented in an awesome comic book style framing that provides some real gems of visual storytelling.

Once you’re informed on your objective, you set out into the war torn country with nothing but the gun on your back and the aching for some loving in your…let’s say heart. The game plays like an old-school side scroller. Your turtle moves on his own, albeit slowly unless you tell him to pick up the pace. Enemies appear from the all angles of the right side of the screen. Some come from the air, others act as blockades on the road, and some sit stationary buried in the ground in attempts to blow your legs out from under you. To eliminate the goblin army that is in your way, you’ll fire off your weapons with a complete disregard for anything but your need to keep moving.

The first levels play through really easily, even on the harder difficulties. This is a great introduction to the game, as it eases you into the control schemes and gives you a good look at what to expect once the action starts to pick up. During your one-turtle blitzkrieg, you’ll score some coinage that will be used at the end of each level to equip new weapons, perform upgrades, and just generally deck out your arsenal. The farther you get, the higher your moving tower of terror gets. If you’re a fan of firepower, this fully functional tank of a turtle will be perfect for you.

Make sure to experiment with the control methods in those first few levels before things get out of hand. There are two different ways to play: one handed or two handed. The one hand method involves dragging from you weapon to your target to unleash a swarm of bullets. The more the merrier, because the shots aren’t extremely accurate with this scheme. If you opt for using two hands, you’ll hold down on your weapon of choice with one finger and tap enemies with the other to target them. Two hands provide more accuracy, but it’s learning curve is a little steeper. It’s also not a great option if you’re playing on a smaller screen–there’s just not enough real estate to make it work properly.

Shellrazer is a pretty straight-forward game in that you move from point A to point B while trying to clear the path as best as possible. From deserts to mountains to jungles, making your way across this continent will bring to mind the song “I’m Gonna Be” by the Proclaimers. But, while the Proclaimers would walk 500 miles and then walk 500 more, Shellrazer does it across the most varied continental landscape imaginable while a war is going on. 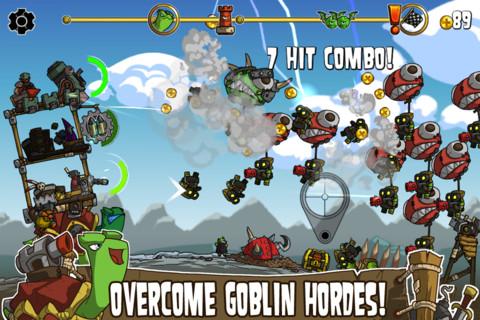 If there’s an issue that needs to be solved with Shellrazer, it’s with the balance. Before you start a level, you’ll be prompted to choose a difficulty mode, which is essentially “easy, medium, or hard.” The problem is, the differences are huge. Even on the first levels, the hardest level is pretty easy, but then things randomly ramp up at an unbelievable spike that will catch you by surprise. If you play this game in a long session, you’re likely to go from extremely outmatch to way overpowering and back to completely helpless, even as levels progress. It’s frustrating at times, but is in no way a deal breaker.

All in all, Shellrazer provides one heck of an experience. Guns galore put most military technology to shame as your turtle quickly becomes a reptilian tank. The onslaught of oncoming baddies makes every last bullet worth its cost and the experience of blasting through a battalion on your way to love is super rewarding. If you’re playing on a small screen, you’re going to run into some control issues and the balance of the difficulty is off no matter how you play, but it just makes you want to power up and push through even more. This game is more than a pretty shell, it’s a full package firepower and fun.