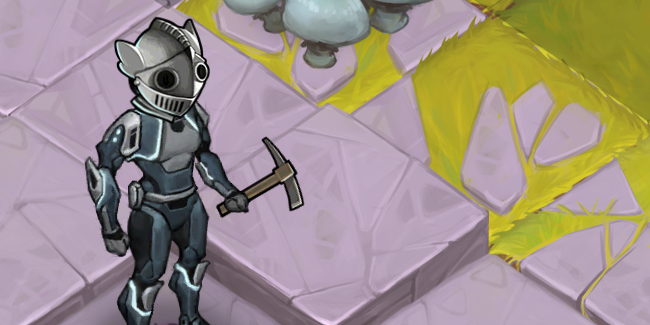 An invasive, shadowy substance known only as “the Blight” is creeping its way across the universe.  One research vessel, outfitted with a mostly-naked Gekkian scientist, a random equipment generator, and an endless supply of clone explorers, has set out to understand and stop the Blight before it completely takes over.  A nearby planet, shattered after a long-dead explosion, is putting off a Blight-resistant signal.  Your assignment, as clones one-through-infinity, is to survey the planet, seek out the signal, and deal with any other bizarre challenges sent your way.  There will be plenty.

As a randomized survival RPG, Shattered Planet thrives on the unexpected.  From the armor your clone wears down to the planet to the results of enemy encounters, nothing is directly under your control.  A typical trip begins on your spaceship hub, where you can use R.O.S.A., the equipment generator, to create weapons and armor.  But you can only tell it what value of equipment to produce—bronze, silver, or gold—not specifically what item.  You can also buy consumable items from the “Crystalobot,” a friendly vending machine that sells a variety of randomized goods ranging from healing items to pet companions.

Once satisfied with your clone’s loadout, you send her to the planet’s surface to tackle either a limited-scope mission or an endless survival run.  Both play out in similar fashions, pitting your clone against a series of procedurally generated and progressively difficult levels connected via teleporters.  Missions end after a certain number of levels and goals have been met, while survival lasts as long as your clone does.  Depending on your gear and experience withplanet-exploration, that could be no time at all.

There are a staggering number of ways to die in Shattered Planet, some more obvious than others.  Most of the local wildlife is fierce and unfriendly, hunting your clone as soon as they lay eyes on them beyond the fog of war.  The Blight itself, ever-oozing across the land, damages both health and fauna by turning creatures into deadlier versions of their former selves.  Random encounters that might provide rewards just as often result in a surprise attack, curse, or other malady that degrades your clone for a short period.  Luckily, since all actions are turn-based and time stops when your clone does, you have plenty of opportunity to plan ahead and either prepare for or avoid the dangers at hand.

Encountering those dangers, taking the risk, and possibly earning a reward is half the fun, though.  Slain enemies regularly drop golden scrap, which is used to perma-upgrade your clone as well as purchase consumables.  Valuable items and crystals are often waiting just beyond those sharp-clawed crablets.  Although each trip to the surface is self-contained and any items taken down to—or earned on—the planet will be lost upon death, the scrap and crystals you’ve collected remain and are used in the cyclical process of buying equipment and improving your clone for the next trip.  Growing physically—by improving your Strength, Wits/Evasion, and Health—and mentally—by learning from your mistakes—allows you to travel further on the next run, earn more goodies, and keep the cycle going. 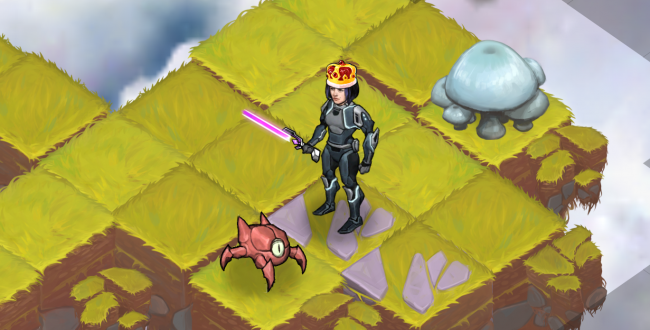 The constant progression, rewards, and dangers keep Shattered Planet‘s gameplay engaging.  But it’s the kooky inhabitants, unexpected encounters, and sheer charm of its world that will encourage teleporting down again and again.  Equipment and items range from Robocop helmets to the Big Red Button (“You know you want to push it”).  Random events involve anything from adopting a baby crablet to making out with a disembodied skull.  Everything you do has some effect, whether it’s increasing your stats or merely changing your clone’s current title from “Explorer” to “Smooched.”  There is always something new to see, snuggle, or set on fire, making each trip even more unpredictable than its procedural levels already did.

Amazingly, developer Kitfox Games has packed all of this gameplay and personality into a free-to-play game that is actually free to play.  The two currencies, scrap metal and crystals, are rewarded frequently during exploration.  With bronze pieces of equipment only costing five crystals each through R.O.S.A. (silver costs 20 and gold 50) and a successful trip easily netting between 50-75 crystals, you should never have to travel empty-handed.  And if you did, vending machines scattered about most levels offer weapons and armor for scrap, allowing even early-stage players to snag quality gear for a song.  There is absolutely no need to pay to win, and even choosing to pay will only grant more spins on the random equipment wheel (or a different clone skin, an aesthetic change only). 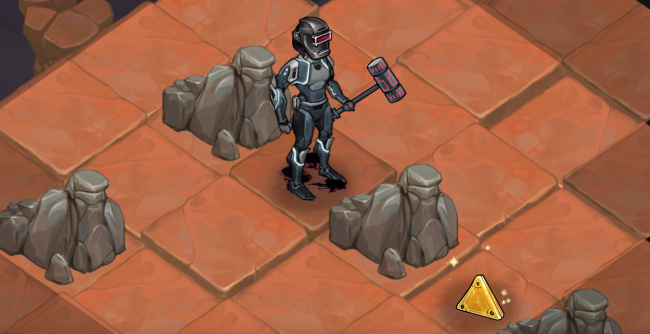 Shattered Planet has landed in the sweet spot between learnability and surprise that keeps each trip new, fresh, and entertaining.  It’s packed with loot to discover, use, and inevitably lose as you fall victim to the many random and wild ways to die.  Although each run plays similarly, you’ll never know exactly what you’re in for when you step on that teleporter—except a fun, ridiculous space exploration that can’t possibly be your last.