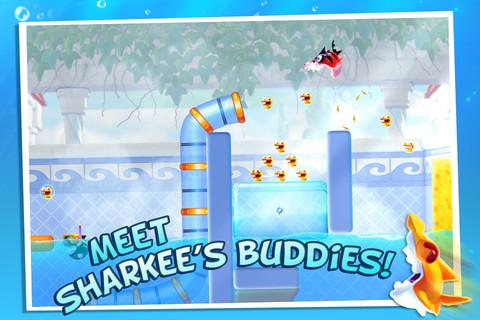 Rubber Ducky, you’re the one …for breakfast.

There are two eras of mobile gaming: Before and after Angry Birds. Like it or not, it’s impossible to deny the influence it had on gaming as it solidified mobile devices as legitimate platforms. Because we live in the “After Angry Birds” era, it’s pretty much impossible to play a game like Shark Dash for more than five minutes without comparing and contrasting the two. The similarities are noticeable, but it’s the differences that allow Shark Dash to stand out from the rest.

The story finds Sharkee (I expected a better name from you, Gameloft) playing in the tub with his friends Sawy, Hammy, Scuby, and girlfriend Sally. Suddenly, a ton of rubber ducks fling themselves into the tub and ruin the sharks’ peaceful day. The sharks put up with the harassment from the ducks, until they kidnap Sally. Apparently, the ducks then run away with her to another one of the world’s many bathtubs.

Okay, so the story is no different than “The pigs stole the birds’ eggs, so now the birds are angry.” The story isn’t what’s important because the gameplay is what will keep you hooked. The concept of the gameplay is what draws the biggest similarity to Angry Birds. Your goal in each stage is to fling the sharks around and destroy (often by eating) all the rubber ducks in a stage.

The idea doesn’t feel all too original, but there are many, often small, differences which make Shark Dash a pure joy to play. The most notable aspect is that you aren’t shooting a shark across a level, you’re already swimming in your level. Most stages start off with a shark or two right in the middle of a bath tub, surrounded by obstacles, bombs, ducks, and coins. Obstacles will either adjust your momentum or direction, bombs will destroy both you and ducks, and coins will give you in-game currency and more stars when you complete the level.

The water physics are where the most unique aspects of the gameplay start to shine. Because the sharks (and ducks) are just bath toys, they’ll always float on water (unless a duck is trapped in a bubble). Launching yourself in the air is an easy way to get a ton of height and distance, as long as you don’t fall out of the tub. Diving underwater will slow your momentum much sooner, so your shots need to be angled and momentum needs to be calculated differently. It will likely throw you off a bit at first, but once you get the hang of it, playing around in the water may bring the same joy you had playing in the tub as a child.

The obstacles and other sharks complete the package. Unlike Angry Birds, you don’t shoot from the same area all the time, wherever your shark lands is where you’ll shoot from next. When you’re given multiple sharks with different abilities, you’ll need to plan your shots and manage your positions so you can beat the stage in as few turns as possible. 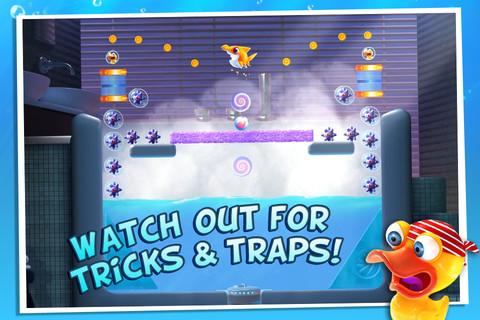 In cliché fashion, there are four worlds with a couple dozen stages each, and you can collect one to three stars for completing each stage. You get one star for collecting all the ducks (which is required), one for collecting all the coins, and one for beating the stage in a set number of turns. The completionist side of me is still going insane trying to land three stars in each stage. Be forewarned, as fun as it is, you’re likely to go insane while trying it.

The coins you collect can be used in numerous ways: you can skip stages, redo a turn, unlock worlds, and change the sharks’ appearances. You can use real money to purchase coins, but unless you really like skipping stages, you’ll earn more than enough coin to get by.

Pound-for-pound, Shark Dash is well worth your money. It may lack originality in some areas, but it makes up for that with its charm and challenging, water-based gameplay. If you’re still on a high from Angry Birds Space or other titles from the genre, then you’ll have no problem welcoming Shark Dash into your heart, or your tub.