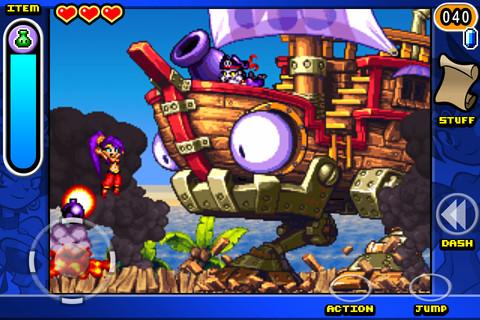 Half-Genie “Shantae” has had an interesting history in videogame form. The belly dancing heroine first appeared on the Game Boy Color, but only well after its successor, the Game Boy Advance, was released. Then last year the follow upShantae: Risky’s Revengewas released for the Nintendo DSiWare download store. Now, that game has been ported over to iOS devices, where it finally found a place that someone might actually see it.

It must be said right up at the top thatShantae: Risky’s Revengelooks downright fantastic. It looks and moves like it just walked off the SNES and right into my heart. The pixilation is perfect, and provides the characters with so much life and vigor. This doesn’t feel like a current gen game trying to look old, it looks like an old-schooler. It’s awesome.

The game was originally released for the Nintendo DS’ download service, so it’s great to see the game make a comeback in a place where it should have a little more visibility. It’s a superb platformer with someCastlevaniatype elements thrown in, but to be honest, it feels much more like a side scroller to me.

In it you play as Shantae, a belly dancer with a mean hair whip. You’ll use said hair whip, and outfits and new moves you find around the world, to beat your nemesis Risky Boots (I love that name) in your quest to find a magic lamp. The set-up, character, and style are awesome, and can’t be understated.

Unfortunately at the end of the day it’s still a platformer, and the touch screen controls are just never going to live up to the preciseness of an actual joystick and button. The controls are ok and really don’t get in the way much, but being designed originally for consoles means that the drawbacks with a touch screen are a bit more pronounced, since they didn’t really account for it in the design phase.

But there’s a really big “but.” I’ve ran into this problem a few times over and it never fails to really grind my gears and send me looking for something else to play: there’s no quicksave option or failsafe. These are mobile devices we’re playing on, and devices that we use for many different functions. Some of these functions (like phone calls or messages) supersede our playing games, and either dump out of automatically or we need to cut short our game time and address them. With Shantae: Risky’s Revenge,this is a huge problem because there’s no quick save option.

I understand that this was originally a console game, where running back across the world to talk to one specific dude in order to save is an understood convention. But in the mobile space (no matter the platform) we need to be able to save and quit in a heartbeat. Maybe we’re grabbing a fast turn while waiting in line for coffee, or staving off a few minutes of boredom on our lunch breaks. We game on a micro-level on these devices, and the games need to understand and respect that. It’s unforgivable to expect us to have the time or where-with-all to find the stupid save point just so we can hit “home” and get on with our lives.

For me this took an otherwise very enjoyable game and made it one I would have a hard time recommending. Numerous times I found myself with a few spare moments to get some gaming in, but went to something else since I knew I wasn’t going to have time to venture out, do something, and hike back to the save point. Not every game is “one and done” likeWhale Trail or Canabalt, I get that. But longer adventure type games need need need a quicksave option. No excuses.