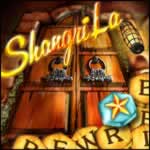 When I think of Shangri La, I envision a lush, tranquil paradise, a mystical Himalayan utopia isolated from the outside world. No worries, no pressures, an extended “retirement” with plenty of time to relax!

Shangri La, from Zylom, delivers a refreshing escape to a gorgeous realm of flourishing panoramas and soothing melodies. But, the experience, for some, may not be too relaxing.

Sharing genres with games like Bookworm, Babel Deluxe and Word Travels, this word puzzler’s set in a Tibetan heaven. Your challenge? Remove lettered tiles by forming words, while seeking and retrieving a “hidden” Star beneath. Solve each puzzle and you’ll unlock additional doors and the brainteasers behind them. In all, 48 cranium-straining levels await.

Unlike most casual word games, there’s no real story to follow in Shangri La. You’re clearing blocked waterfalls by solving puzzles, and that’s about it. There’s only one play mode, as well. Not the norm by any means.

You begin at the Water Cave with eight locked doorways. Behind every one is a blocked waterfall you need to free, accomplished by solving six puzzles. As you work out each conundrum, the next is made available until all six are unraveled, the door unlocked and the waterfall flowing freely.

Your goal as you approach each puzzle is not simply to solve it, but to collect six stars in the process. Two are received when you solve a puzzle, one for creating a bonus word, one each for making a seven and eight letter word, and one for reaching the target score. Stars are needed to open successive doors, so you want to collect as many as possible.

As indicated above, puzzles are solved by forming words from lettered tiles, appearing, Mahjong-like in a wide variety of patterns. An integrated tutorial and basic instructions guide you through the mechanics.

You create words by clicking on yellow letter tiles (blocked tiles appear gray until released). This transfers them to a Wordbar at the bottom of the screen. Once you’ve crafted a word, the Enter button flashes and turns green, allowing you to submit your creation. Words are fashioned until you run out of letters and/or free the Star tile by removing all adjoining tiles. So, make sure you create as many words as possible before you release the Star. Once you do, the puzzle’s complete.

If this sounds relatively simple, it is. However, there’s the catch. Shangri La offers but one play mode – and it’s timed! You have to think fast, and more so as the game progresses.

As expected, you’ll find bonuses and obstacles. In this case, they take the form of tiles and tools. Tools always work to your advantage. The Shuffle Stone, for instance, reshuffles all letter tiles if you’re stumped, the Dictionary gives you the longest word possible and the Star Finder solves the puzzle immediately. All tools are placed on your Toolbar and carried over to the next puzzle if unused. But, there’s a limit to the number you can have, and new tools will be discarded if the Toolbar’s full.

Fortune tiles can either be a boon or bane. A Magic Wand will identify them in advance, but most of the time you’ll have to take your chances. For example, a Joker tile acts as wild card that you employ in place of any letter, Double Score doubles the value of the next word created, Extra Time resets the time clock and Bigger Toolbar lets you carry more tools. Conversely, Difficult Letter gives you a tile that’s harder to use and 4 Letter Words shrinks your Wordbar to just four letters.

So, where does Shangri La fit in the overall scheme of word puzzlers? Well, unlike many in its class, it doesn’t limit word recognition to what the developers determine is “acceptable.” Instead, it allows words of a more questionable nature (specifically, swear words and those referring to various body parts and crude noises). This, along with the game’s eye-catching graphics and overall atmosphere, differentiates it from its competition.

Unfortunately, when considering modes of play, Shangri La comes up short. As mentioned, the only mode offered is timed. There’s no alternative if you prefer a leisurely approach, and that’s a serious omission. Hence, there’s a constant sense of urgency. While okay for folks who like added pressure, for others it’s a deal breaker.

So, is Shangri La right for you? If you enjoy an intense word-based challenge where you’re constantly under the gun, you’ll find it close to paradise. If, on the contrary, you’re looking for a more relaxed pace, utopia awaits elsewhere.