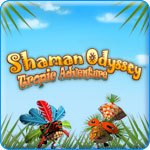 Cateia Games’ Shaman Odyssey is the latest tropical island-themed building/sim game where you’re tasked with shepherding a tribe of villagers through various challenges and dangers on a quest to reach their "true home." While the game boasts some unique graphical tricks, the wholly unoriginal premise and lacklustre gameplay is a bit of a disappointment.

The game begins when the tribe’s young Shaman (you, the player), is visited by an ancestral spirit who urges him to reunite the tribe – whose people have been scattered throughout many different islands – and lead them to a permanent and safe home.

After a clumsy tutorial that dumps a ton of information at the player all at once (unlike, for example, Build-a-lot, which spaces instructions out in a more reasonable fashion), players embark on 22 missions that involve meeting certain objectives like harvesting 50 wood, building a level 3 totem, and collecting 20 seashells.

Each mission is set on a small tropical island, and although the layout is slightly different each time, every island contains the same fundamentals: a beach where you can collect seashells, a grassy area where you can harvest herbs for making potions, and various constructions sites that you can click on to build structures. Before you can construct or upgrade a building or brew a potion for the first time, you have to buy its blueprint at the Shaman’s tent, which costs seashells. Buildings cost resources of food, wood or stone, which are gathered automatically by the tribespeople after you build gardens, fisherman’s huts, woodcutters and stonecutters buildings.

While the tribespeople are toiling away to gather their quota of materials, you’ll be spending most of your time as the Shaman running around the island collecting seashells and herbs, mixing potions to cure the random ailments that afflict the villagers on a regular basis, or fending off sharks and ghosts.

About half way through, the game stops holding your hand and you actually have to think for yourself to an extent. For example, one of your level goals might be to harvest 30 food, which means you have to upgrade your storage hut to least level 2. Even so, the game never offers any serious challenge.

Except for a handful of exceptions, levels aren’t timed so you can take as long as you like. As a result, meeting level goals is not about strategy but rather about laying the necessary groundwork and then waiting around for your villagers to finish collecting the necessary resources. Even the grade of trophy you get for completing a level (Gold, Silver or Bronze) seems to depend not on how efficiently you completed the level, but how many resources you’ve managed to horde.

Neither the repetitive gameplay nor the banal dialogue (which consists of the Shaman and spirit exchanging brief conversations that amount to little more than Spirit: "There are more sharks, and you need to gather more food." Shaman: "Ok, I’ll take care of it.") give the game much charm or forward momentum.

Since much of the game involves a hands-off approach where you wait around for resources to get gathered, it would at least have been nice if the game could be left running in the background while you exited the window to do other things (like read emails, or check Gamezebo!) But alas, the game pauses the instant you click out of it, meaning you have to just sit there with it running and wait. To add another nitpicky complaint, the game’s font is such that the numbers "2" and "1" look quite similar and it’s hard to tell them apart.

On the positive side, Shaman Odyssey‘s 3-dimensional graphics give you a great deal of control over how you can view and move around in the island. Using the mouse’s two buttons and scroll wheel, you can zoom in and out, scroll to different parts of the island, and even adjust the angle at which everything is viewed to the extent that it can feel like you’re actually walking through the village. Of course, you’ll need to be fairly savvy with the mouse to be able to do all of this comfortably. Another downside is that the graphics aren’t particularly detailed, so zooming in isn’t as much of a treat as it could have been.

I realize that not everyone is a fan of timed challenges, but Shaman Odyssey takes the philosophy to too much of an extreme. With there rarely being any pressure to finish – be it time-based or otherwise – completing levels comes down more often to attrition rather than fun.

Joan Jade and the Gates of Xibalba Review