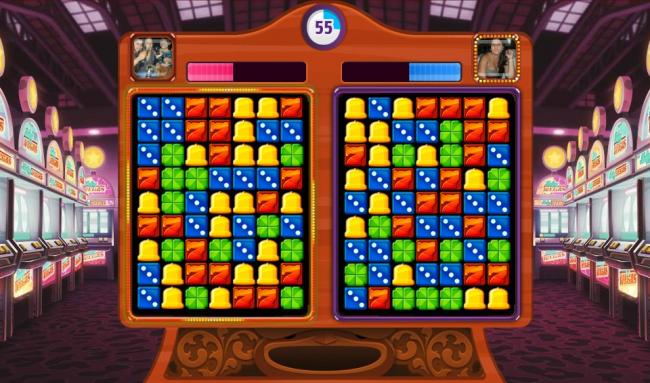 Playing Shaking Vegas, the new-to-mobile match-three game from Vostu and GREE makes, me very aware of one cruel fact: I’ll never see Las Vegas the way gamblers of old saw it. The legendary casinos born from windswept dunes have been dulled by the shifting sands of time. The crooners of yesteryear aren’t with us anymore. They’ve been replaced again and again – an homage here, a tribute there. The newcomers sing the same standards of course, and there is some comfort to be found in that. But even though they hit all the notes, they don’t set fire to the ears like they once did. Those flames have been doused by reiteration…

Shaking Vegas is pretty standard match-three fare, gameplay-wise. A series of icons appear on a gridded screen (lucky sevens, shamrocks, bells, clubs and dice marked three) and the player searches the field for adjacent clusters of three or more of a kind (diagonals don’t count). When the clusters are touched, the group disappears, adding to your point total. As your point total rises, your “jackpot” bar fills. And when your jackpot bar fills all the way, the number of icons cleared when you press a cluster increases, as surrounding icons are cleared out as well. And if you think that just pressing random icons as the timer ticks down sounds like a decent strategy, you’d better think again: Your jackpot bar only fills as you successfully chain your clusters. A cluster of less than three “greys out” the icons for a short while when touched, rendering them out of play for a time and reducing your jackpot bar to zero. Since jackpots are necessary for high scores, accuracy is rather important (and you even get a bonus at the end of the round based on this).

To help you during play, power-ups become available as you level, which include bombs that clear out anything caught in their explosion, extra time that does as advertised, and terminator orbs that clear out three lines of blocks at once. In addition to this, there are power-ups that, when pressed, clear the entirety of the icon they represent from the board. These are very useful when you’re time is close to nil and you need a quick shuffle. And if you manage to spell “shaking” during a round you get a nice bonus as well. It all works well, but it doesn’t seem very different from other games in the genre. There’s a nice shop where power-ups can be bought between rounds, and multiplayer thanks to GREE, but you’ll swear you’ve heard this song before.

Graphically this game really doesn’t stand out much from similar faces in the crowd. Even the character art is uninspired, as Jessie (whom I assume to be the dealer or whatever the match-three equivalent would be) looks like Erin Esurance in a Cowgirl get-up. It’s not bad, per se. It’s just very generic. Nothing I would be willing to lose my shirt over. Nothing that screams, “This is Las Vegas.”

The music is lacking as well. You’ll hear a title song and a tune or two as you progress but, again, nothing stands out. Sound effects (including the clearing of icons, the initiation of jackpots, and the applause of onlookers as you rack up points) are pretty nice, though. Kind of tinny, but they do have a casino feel. Or the echo of one, anyway.

At the end of the day you’ve probably played this game before. It may have gone by a different name. It may have been a different time. But it was similar enough of an experience that I would be hard-pressed to recommend this to well-traveled fans of the genre. If you’re a first timer, there is fun to be had. But if you’ve been here before, and chances are you have, you might be better off reliving the classics of days gone by.