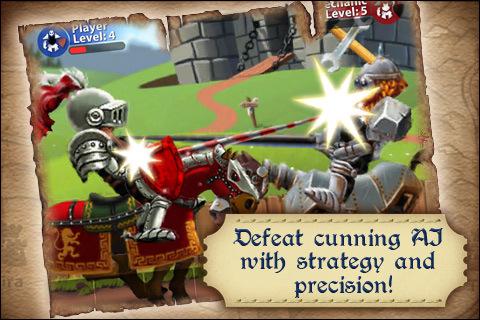 Mayhem and destruction has never been so cheerful and fun.

WANTED: Good-looking knight to ride in tournaments. Must have own armor, lance, shield, and horse. Also, it doesn’t hurt if you happen to be ruggedly handsome underneath your helmet. If interested, please respond by picking up a copy of Shake Spears! for the iPhone or iPad and getting your adventure underway.

Shake Spears! is a medieval joust game that’s about as simple as can be. Players control a knight who travels from town to town, competing in 20 different jousting tournaments as he gains fame and fortune. Seriously, that’s all the info that’s provided, there’s no real plot otherwise. During jousts, player-controlled knights ride from the left side of the screen; meanwhile, an opponent rides in from the opposite side. Players aim their knight’s lance by swiping their finger up and down the right side of the screen, while the shield is controlled via swiping the left side.

The goal is to knock one’s opponent from their horse. Ultimately, this is accomplished by delivering blows that will drain the enemy’s life bars, but it takes a little skill to do so. If the strike hits a character’s shield, the damage is pretty nominal. As a result, players have to aim carefully and try to bypass an opponent’s shield, hopefully striking an unprotected part of the body instead. On top of all this, shields and armor take damage and break down during a joust; if a piece of armor breaks and a hit is landed on an unprotected area, the damage is devastating.

There are also spells and abilities that can be triggered during a joust to help the knight who activates them. These include speed boosts (which allow strikes to deliver extra damage), quick equipment repairs, and flashes that leave an enemy stunned. However, these abilities can only be used once per joust, so players have to use them judiciously and when they’ll be the most effective.

As the game progresses, players have to level up, increasing their health, armor, and strength. Each fort/castle contains enemies who are stronger than the previous area, so this is pretty much mandatory. As opposed to other titles, though, players don’t earn experience points – they earn gold which they then have to use to buy higher levels or new abilities. For better or worse, this gets pretty expensive pretty quickly, which means players will have to replay tournaments and earn more gold before they can progress further.

There is a shortcut, however, thanks to an in-game store that allows folks to buy gold in exchange for (relatively little) real-world money. The highest amount that a player can buy is 50,000 pieces of gold, which retails for about $4.99 (for reference, that will buy a ton of abilities and/or level increases). 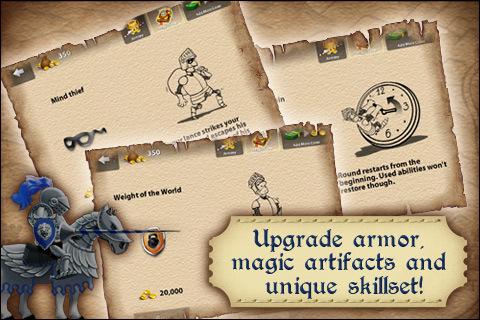 Shake Spears! deserves some special recognition for its visual presentation. The game has some of the best 2D graphics to appear on the iPhone. They look like they were hand-crafted, with lots of detail and lovely colors. The animation during jousts is incredibly smooth, too. Overall, this is a game that is both stylish and attractive.

At first glance, Shake Spears! seems rather shallow and repetitive. But it turns out that isn’t the case. There’s a surprising amount of strategy involved with the gameplay, especially in the latter portions of the title. As a result, there’s a lot of challenge, depth, and fun.