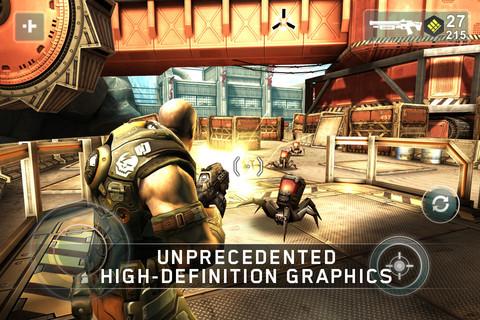 This should’ve stayed in the shadows a little longer in order to get some kinks ironed out.

Madfinger’s Shadowgun wants to be Gears of War so bad that it can taste it. In many ways, it succeeds in this noble ambition. It’s got a gritty sci-fi setting. It’s got lots of action. It’s got a totally over-the-top plot. It’s got the ridiculous amounts of gunplay. But what doesn’t it have? Well, it doesn’t quite have the level of polish that it needs to meet its goal.

Shadowgun tells the tale of John Slade, a space-faring bounty hunter who’s covered with big muscles and is a firm believer in the philosophy of shooting first and never asking questions later (in other words, he is All That Is Man). Hired by a galactic conglomerate to recover rogue mad scientist Dr. Simon (who seems to be a blend of Hannibal Lecter and Victor Frankenstein), Slade and his comely female robot are shot down before he can land his spaceship and he has to fight through Simon’s mountain fortress. Oh, and did I mention that the fortress is literally swarming with mutants, many of whom look like they’re straight out of a bondage movie? Because it turns out that’s also kinda important.

Needless to say, the premise and plot sits just this side of delightful insanity. The tone is so “extreme” that capital letters and extra Xs are needed to convey the general feeling. Sadly, the gameplay itself isn’t quite as enjoyable.

The third-person shooter action starts off with a bang after a short tutorial. The basic controls are pretty standard for games of these type: a virtual thumbstick pops up whenever you touch the left side of the screen, while fire/reload buttons are always present on the right side. Touching the right side of the screen will also control the game’s camera.

Now, the shooting elements themselves generally work, but there are some glitches that happen often enough to be irritating. The targeting reticule will light up when it’s trained on an enemy, meaning they can be shot; unfortunately, the aiming system is more than a little flawed. There are times where an enemy is only a couple of feet away and has the reticule trained on him, but it won’t light up. This means that no matter how many shots you fire, they don’t seem to connect. Meanwhile, there are a lot of times when an opponent will be crouched behind cover but can be taken out because the reticule has lit up.

Cover, too, is tricky to deal with. Roughly 90 percent of the time, taking cover behind a wall/rock/barricade, leaning out to fire at enemies, and moving on works like a charm. The problem is that, every so often, Slade will get stuck leaning against whatever he’s leaning up against. It’s a bit of a problem when, say, an enemy comes around the corner and you literally cannot get away from your cover in order to aim at them. Not only that, but when Slade gets stuck on objects, the camera will sometimes become stuck, too. When this happens, sometimes it’s just best to let the poor guy die and restart at the last-saved checkpoint. That said, when it happens a couple of times within ten minutes, it starts to become maddening.

Visually, this is easily one of the best-looking games on the iPhone. In fact, it’s safe to say that this is sitting somewhere in Infinity Blade territory when it comes to graphics. The characters are imaginatively designed, the world that Slade finds himself running through is full of vibrant, colorful detail that begs to be explored (more’s the pity that the game is so linear), and the lighting impressively dynamic. Honestly, these graphics would’ve looked decent on the last generation of home consoles.

That said, they’re not perfect. While things look magnificent on the iPhone, they’re a bit blurry on the iPad. On top of that, there are only a few different enemy types; after a while, it starts to get kind of boring to shoot the same wannabe S&M models and their hideous robot companions over and over again. 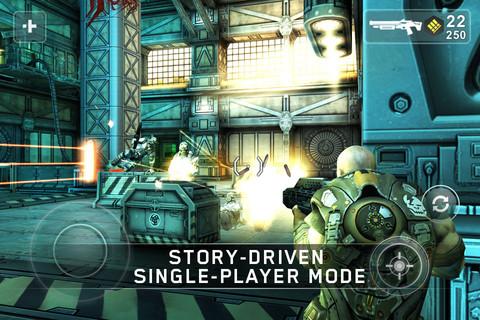 The audio, too, is pretty rock solid. All the voice actors do a pretty stunning job with their delivery. In fact, the performances often feel too good for the cheese-tastic script in the game. Seriously, this is dialogue straight out of a late-night sci-fi movie on television; it’s absolutely ridiculous and over-the-top, and it might’ve been a little easier to enjoy if the actors had tried to chew the scenery more instead of playing it straight.

Shadowgun is something that should be checked out simply because of what a technical accomplishment it is. On top of that, the game is utterly ridiculous; its tone is so over the top that it’s delightful. Gameplay-wise, though, it’s not quite polished enough to be truly enjoyable. If you absolutely need to play this game right now, it’s fine, but everyone else should hold off for a little while until Madfinger hopefully chooses to get an update out and turn this into the game it deserves to be.

Do Do EGG! Review