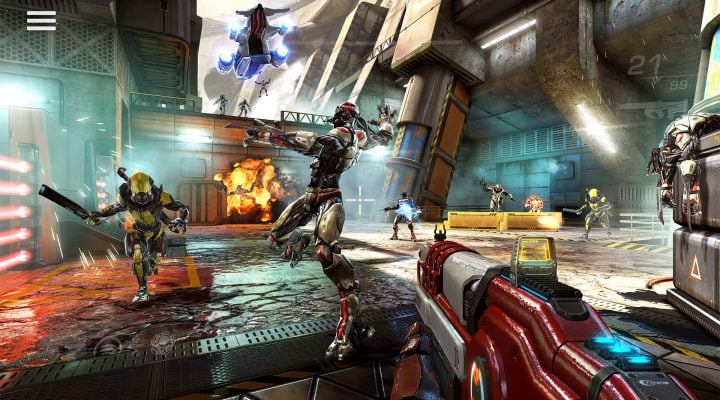 Tonnes of variety in both solo and multiplayer mode

Accessible and built from the ground up for mobile

The inventory cap is frustrating unless you pay to upgrade

Console-quality shooters on mobile were a thing before Shadowgun Legends came along, doing its best impression of Destiny, but with Madfinger Games’ latest blast-em-up now fully locked and loaded on iOS and Android devices, the quality we’re talking about is no longer PS2.

Standing on the shoulders of games like NOVA and Dead Trigger 2, Shadowgun Legends takes the touchscreen FPS to new heights. It’s derivative in some respects, sure, but Madfinger deserves plaudits for taking a well-used blueprint and refining it to near perfection.

Everything about Shadowgun Legends screams ‘high-end shooter’ at a brash, confident pitch. If you’ve ever played a mobile FPS before, this is the kind of game you can pick up and play with minimal tuition. A swipe of the left thumb lets you look around, the right is dedicated to movement and firing is automatic if you stick with the default settings.

Madfinger shot for accessibility and simplicity and hit the bullseye in both respects. Besides moving and shooting, there are few commands to get your head around. A double-tap of the screen lets you aim, and further down the line, virtual buttons for additional abilities, such as grenade tossing, will appear at the foot of the display.

Keeping things streamlined was a shrewd move on the developer’s part, as this is what makes the game such a good fit for mobile. Including virtual buttons for commands like crouch and jump might have made Shadowgun Legends more sophisticated, but it would also have compromised the free-flowing, fast-paced action.

Graphically, it’s an absolute powerhouse that has Unity firing on all cylinders. The game takes place against a colourful sci-fi backdrop that encompasses everything from densely-populated planets to claustrophobic spaceship interiors straight out of the Alien franchise.

Madfinger has a reputation for churning out gorgeous-looking shooters that have about as much upstairs as one of the zombies from Dead Trigger 2, but this isn’t another addition to the mindless horde. The Czech-based studio has gone to great lengths to ensure there’s more to Shadowgun Legends than shooting anything that moves. Missions are spattered with light RPG elements and are objective-based, involving hacking puzzles, rescue escapades and fetch quests.

Of course, none of this is rocket science – even the missions which literally involve rockets – but it does at least create the illusion of depth and elevates the game above the likes of Unkilled. That said, there’s true variety to be found as well: the sheer volume of content and rewards on offer will keep you playing Shadowgun Legends for untold hours.

From the game’s main hub, there are always solo missions to embark on, as well as co-op quests and virtually every form of multiplayer versus contest you can think of. Whether teaming up with other players or gunning them down in cold blood, Shadowgun Legends’ infectious accessibility carries over to the online modes, making it competitive with recent throne contenders such as Fortnite and PUBG.

Both solo missions and multiplayer escapades come with bucketloads of XP, which helps you scale the game’s huge skills tree, and successfully completing them always yields new weapons and armour. These drip-fed rewards, and the fact they can be obtained by playing in short bursts, are a big part of what makes Shadowgun Legends so compelling.

Despite its successes, the game isn’t perfect. To say the storyline takes a backseat is an understatement: it’s been bound, gagged and shoved beneath the backseat to pave the way for all-guns-blazing carnage, and the free-to-play business model throws up the occasional obstacle for players with no desire to part with any real-world cash.

This is most apparent when the restrictive inventory cap comes into play. Players are unable to tick off a completed mission until they’ve accepted their rewards, and this means going through the rigmarole of clearing out inventory space every time, unless you’ve paid for additional slots.

These minor gripes aside, Shadowgun Legends is a strong contender for best mobile shooter on the market. The game would have shone on previous-generation home consoles from a visual standpoint and everything about it feels tailored for tablets and smartphones.

Until there comes a time when the likes of Doom, Call of Duty and Battlefield can run on mobile with zero concessions, Shadowgun Legends is Google Play and the App Store’s definitive FPS.