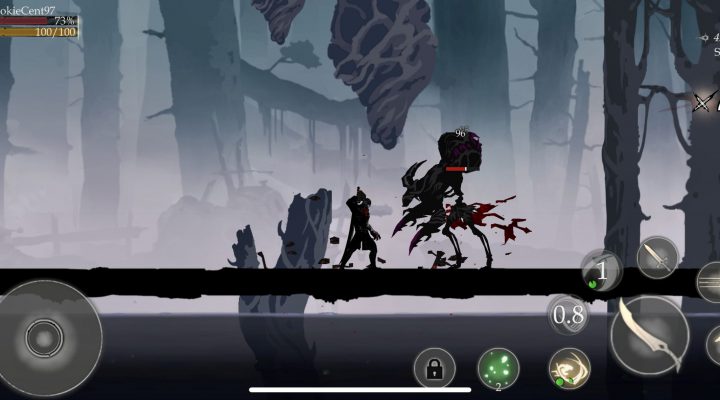 Some sections can be frustrating

Shadow of Death 2 is an in-depth hack and slasher that sees you taking on creepy monsters in a mostly-monochrome world. You’ve got a sword, you’ve got some special moves, and it’s up to you to cut everything into tiny, gory chunks. And do you know what? It’s really good.

The key to any side-scrolling action game on mobile is the controls, and Shadow of Death 2 gets them pretty much spot on. A d-pad on the left of the screen controls your movements, then there’s a gaggle of buttons on the right that let you jump, dodge, attack and use your special moves.

Everything is spaced just right, and it’s rare that you’re going to poke the wrong button in the heat of battle. Combos are slick and easy to perform, and there’s an experimental feel to the combat that encourages you to try out new ways of taking down foes.

The monsters you’re battling range from slithering, poison-spitting worms, to colossal tree-beasts with weird, spiky flowers sticking out of their backs. There are boss fights too, and they capture the pattern-watching brilliance of some of the side-on action games of yore.

The game isn’t without its niggles, though. Some of the text seems to be missing, which is particularly annoying when you’re trying to equip new things – there’s nothing written on the buttons, so you don’t really know what you’re supposed to press.

There are some difficulty spikes too, and some frustrating enemies who pop up out of nowhere and grab you, giving you no chance to react. But for the most part there’s a brilliant flow to the violence, and it’s going to hook you in from the first swipe to the last.

If you’re looking for a challenging, gritty and engaging action experience on your phone, then Shadow of Death 2 should definitely be high on your list. It’s the sort of game you can’t help but get stuck into, and that’s no bad thing at all.