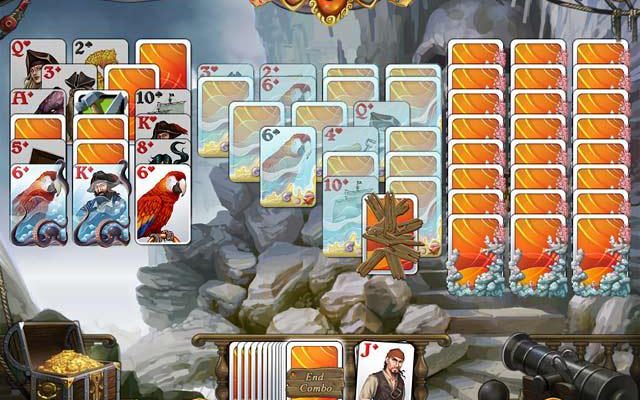 Arrrrrrr you ready for some pirate puns?

There are very few things cooler than robots and ninjas. This is universally understood. Yet certain characters and archetypes do come close, and periodically rise with the cultural tide. Just look at werewolves and vampires. Those dudes are killing it. Cowboys are doing pretty well, too. But what about our beloved, scurvy-ridden friends, the pirates? Sure, they had a good run with that whole Caribbean gig, but has their ship of awesomeness finally left hip harbor? Have they walked the plank of relevance? Are we shamelessly fishing for analogies?
Well, yes, and no.
Pirates certainly still evoke visions of salty swashbuckling, bevies of booty, and merry, drunken shanties sung late into the night. But they also take part in a much more commonplace, “lets-kill-time-until-five-o’clock-rolls-around” form of pastime. That’s right. Pirates play solitaire. Namely, Seven Seas Solitaire. And while such a simple game may seem a bit workmanlike for such a boorish group, these rugged sea dogs add in enough twists and flare to get any lily-livered land lubber ready for some cut-throat card-sharking. 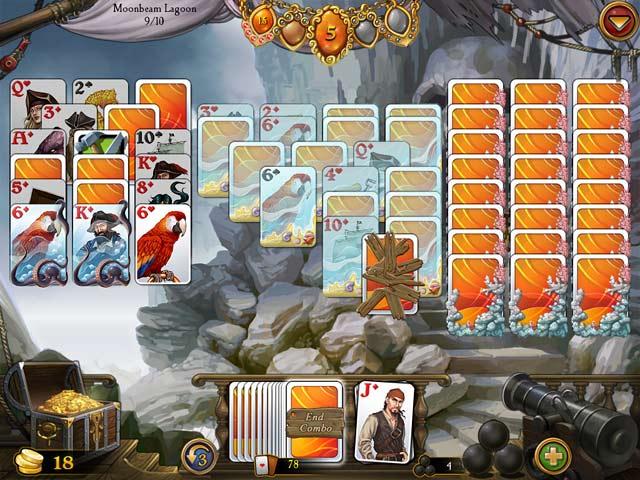 As with any regular game of solitaire, your goal here is to clear the cards laid out above you before depleting the deck below. A card is flipped from the deck, and you pick cards either one step above or below, continuing to do so until all cards clear. If you get stuck, you flip another card from your reserves. However, this simple premise becomes a bit more challenging thanks to the various gameplay twists added in by our seafaring friends.
First off, the main point of the game is to acquire as much gold as possible (of course), and the amount of gold you gain is contingent on two factors. The base amount of gold you gain depends on your rating for the round, which relates to how well you avoid going bust, and extra amounts of gold are earned when you perform combos, which earn multipliers and can vastly increase your final treasure trove.
Combos are activated when you clear six consecutive cards without needing to draw from the deck. This earns you a small multiplier. If you continue the streak, or achieve more combos before the stages end, your multiplier increases. At the end of the stage all of your gold is added up and the multiplier is applied. Many stages require you to garner large amounts of gold to go on, and demand the execution of lengthy combos, so this is a mechanic you’ll want to master. 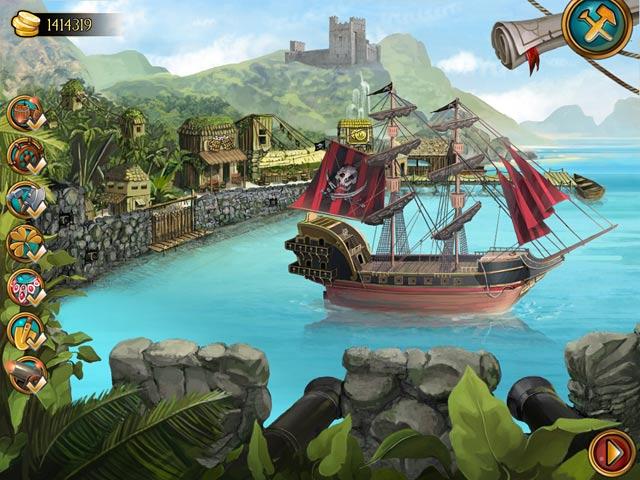 To make continuing combos easier the game introduces cannonballs, which can be bought mid-stage, and are used to “shoot” down any card when you have no other options left. This keeps you from having to break the combo and draw from the deck, and helps add in even more strategy, as you can reserve strings of cards to be activated after the use of the cannon, paving the way for you to accumulate massive combos and a killer multiplier.
The bounty of bucks you accumulate doesn’t merely represent points, either, as gold can be used in between stages to purchase various items. You can build up your hideout and upgrade your ship, the Falcon, and doing so earns power-ups that aid you in the game. You can buy things like a “Basic Dock,” which nets you an extra “re-do” should you mess up (you start off with one per stage). There’s a Tavern to build for your crew, which helps boost morale and adds 5 more cards to your deck. You can even save up for a pier, which reveals the top card in your draw deck, allowing you to strategize which cards to hold off playing and save for later.
On top of all this, there are various unique cards with different properties, which require certain cards to be cleared before others. Take, for example, the reef cards. Before you can play them, you must first clear the “shallow waters” cards, effectively “navigating” the reef. Other examples include broken cards, which need to be repaired by uncovering “tool” cards, and octopus cards, which won’t be cleared until they are played two times. 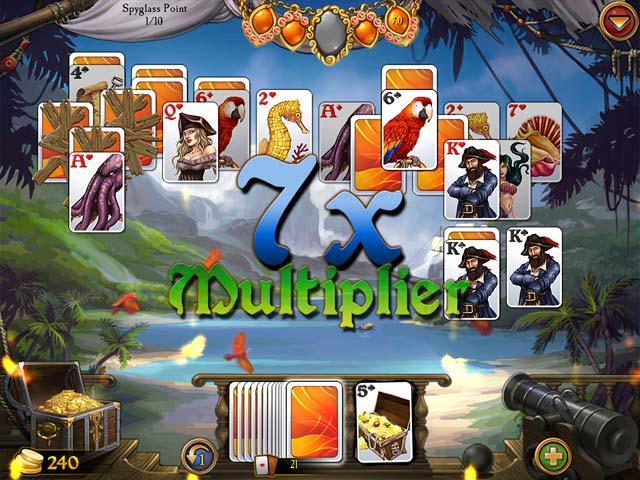 But while all these added gameplay elements help add some much needed excitement to the basics of solitaire, the game still periodically steers into rough seas. Firstly, the power-ups mentioned earlier are pretty darn expensive, and as such take while to unlock. Also, the deck you draw from during gameplay isn’t always a regular deck, meaning you may pull your fourth king, and then uncover another a few moves later. While the power-ups that add in additional cards kind of require the game to do this, it does make card counting pointless.
Still, these small hiccups are easy to overlook, especially considering the game’s slick presentation. The simple 2D art is well done, and the nautical theme extends beyond the visuals. Background noises feature lapping oceans tides, sounds of distant birds and the creaking wood of old boats. There’s even a surprisingly involved story to follow, which develops as more stages become unlocked. It revolves around an admiral-turned-fugitive being pursued by the royal navy for the disappearance of his fiancée, who happens to be the Duke’s daughter. It’s basically a nautical version of Harrison Ford in “The Fugitive,” but with cards.
With 300 levels and over 20 power-ups to unlock, there is quite a lot of content on offer. The puzzle-like card mechanics add depth and strategy, while the bevy of power-ups continue to augment the gameplay as you progress. All in all, Seven Seas Solitaire is much more than a simple card game. Finish it off with a combo system that rewards careful planning with buckets of gold, and you’ve got enough fun to shiver even the most rigid of timbers.