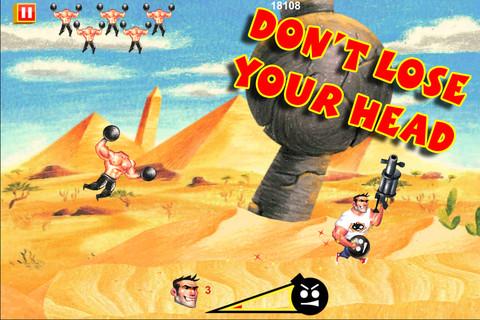 If you’ve ever played a Serious Sam game before (the goofy first person shooter series made popular on PCs in the 2000s) then you know all too well what the above is supposed to sound like. The first time I heard that faint screaming, growing louder and louder as a headless muscle freak with bombs for hands ran straight at me, I couldn’t stop laughing. The laughter soon turned to sheer terror as I realized they were on a suicidal mission to blow me to smithereens.

In Serious Sam: Kamikaze Attack the tables are turned. Instead of playing as the hero Sam, you play as one of the beheaded kamikaze freaks relentlessly pursuing him. The gameplay is similar to Canabalt or Robot Unicorn Attack in terms of the character persistently running. Your controls include tapping the bottom left corner of the screen to jump over gaps and tapping the bottom right to attack obstacles. As long as you make a clear path for yourself you will catch Sam after a set distance, jump on him, and explode yourself, taking Sam with you.

Attacking fills up a rage meter which, when full, will blow you up if you attack again before it has cooled down. When not attacking, the meter will automatically drain. Along the way there’s 1-Ups to give you an extra life (you start with three), water drops to instantly cool your rage meter, combo bonuses to increase your score and turtles to slow you down. Each of the 40 or so levels includes a bonus “side mission” that usually deals with attacking something in the world a set number of times. Being that the game never changes its core from the get-go, this is a welcome distraction to keep you playing.

This game was created by an independent team as part of the special releases leading up to the release of Serious Sam 3: BFE. It has hand-drawn art assets that come to life in a simple but effective manner. The controls are responsive and everything runs pretty well. The whole idea is nicely conceived and plays well with the silly world that has been built around Serious Sam. 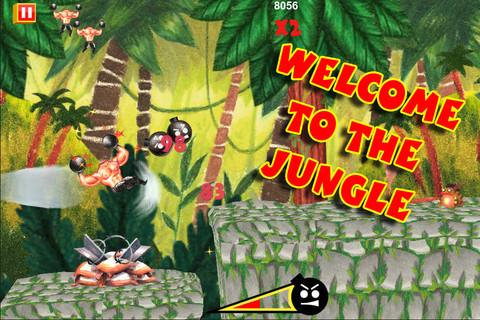 I think the biggest problem this game faces is the appeal factor for folks who aren’t already interested in the Serious Sam world. If you aren’t already familiar with the franchise, the game doesn’t do anything to tell you why you should be. Beyond that, the menu system could’ve used another set of eyes or been given a pass by someone who had more experience creating user interfaces. The “back” and “home” buttons on my Android phone should always have some sort of function while in the game. The only way to quit is using the tiny on-screen pause button to start backing out.

It’s hard to knock anything about a game with as much spirit as Serious Sam: Kamikaze Attack. It was obviously made by someone who is a big fan of the series, and it plays very well with those of us who are “in the know”. Playing the villain in a game is always fun, but getting to play a headless one with bombs for hands who wants to blow up the hero just makes me giddy.