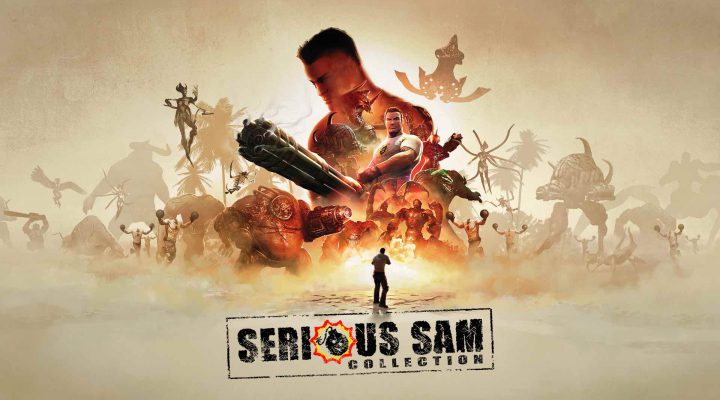 Good range of options and modes

The Serious Sam series has been around for almost twenty years and spawned five mainline entries, a huge number of spin-offs, and even had a ropey Game Boy Advance iteration.

Yet over that time it’s changed barely one iota in terms of what it offers and who it appeals to. So if you’ve played a Serious Sam game before – even if just for a few minutes – you already know what to expect from this compilation on the Switch.

Including the first game, it’s sequel (helpfully not titled Serious Sam 2, even though an entry under that name exists – and isn’t featured here), Serious Sam 3: BFE, and a couple of expansion packs – this is a title that boasts a huge amount of content.

If you don’t know, the Serious Sam series has a refreshingly simple take on the first person shooter genre. It generally focuses on throwing you into huge open arenas, and then bombarding you with enemies that you have to deal with via a set of meaty weaponry – including shotguns, rocket launchers, and miniguns.

The enemies don’t really have any AI to speak of, with some shooting at you from a distance – and the rest just making a beeline straight for you.

Now this might sound a bit dumb – and it is – but the briliance of Serious Sam is its simplicity. Seeing waves of enemies tearing towards you and then surviving this onslaught is hugely exhilarating.

Yet the real star is the enemy set, which is ultimately what helps maintain your interest in what would otherwise be a relentlessly shallow experience.

They may not be the smartest, but they all have differing attack patterns that makes dealing with them – and then in combination with each other – a constant test of your reactions and decision making.

The Beheaded Kamikazes – which run screaming towards you, exploding on contact – are a highlight, but then there are foes which you have to sidestep constantly, pick off from distance, or even take cover from (trust us, this is actually a last resort in a Serious Sam game).

One issue is that battles can be a bit too messy, with a little too much going on. This can often be the case in the interior stages specifically, where the game’s true strengths aren’t given the best opportunity to shine.

But by and large Croteam avoid too many clumsy moments like these and deliver strings of satisfying combat scenarios and memorable moments.

As for the three mainline games included, the second is our pick of the bunch – taking the first game and benefiting from slightly (and we emphasise slightly) more nuanced level design. The third is just a little too familiar to the entries that have come before, but is still a worthy entry in the series overall.

This Switch port is impressive too, with the game performing well docked and handheld – there’s a range of co-operative options also, and the load times are slightly slow but tolerable.

The Serious Sam Collection is a very well put together compilation of games that boast more depth than many give them credit for – and is definitely a must play if you’ve never experienced these no holds barred shooters before.