Home / Reviews / Secrets of the Dark: Mystery of the Ancestral Estate Review

Secrets of the Dark: Mystery of the Ancestral Estate Review 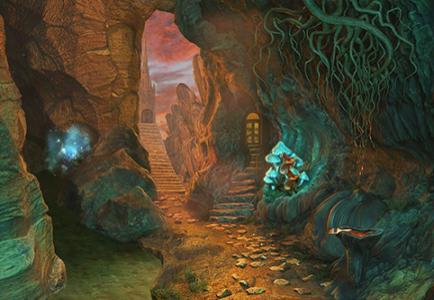 Travel to a Mediterranean island to help an heiress haunted by the deeds of her ancestors.

Spooky mansions have long been the bailiwick of mystery writers, but for a while now, hidden object games have been horning in on their territory. Secrets of the Dark: Mystery of the Ancestral Estate is set inthe villa of a family of inventors who, aside from inventing bizarre contraptions, spend their time trying to stop one of their psycho siblings from taking over the world. Although the game stumbles at both beginning and end, in between it presents some unusual and fascinating gameplay.

I’ll admit it; I rolled my eyes at the start of this game. The second the intro cinematic showed me on a boat sailing toward an island where I would investigate an ancestral estate, I groaned inwardly, thinking of the many other times I’ve done such a thing. I cringed when the extremely vague intro dialog told me I was going to a house at the behest of a woman who was “frightened because of unexplained events”, a woman who was “too frightened” to even explain what those events were. Who takes a job with that kind of information? Well, I guess I do.

After this inauspicious beginning, I was seriously doubting my ability to enjoy playing this game. I’m happy to report that for the most part, I was totally wrong. Yes, the first ten minutes were pretty rough; it’s as if creating a motive for the investigation took too much mental energy, so the development team just tossed out words like “fear” and mystery” thinking they’d be enough to pique my interest. Fortunately, the first ten minutes are not a good indication of the game’s quality. Mystery of the Ancestral Estate is a tightly-designed, thoughtful adventure game that’s so well organized, you don’t need a map to navigate it. More importantly, much effort was put into devising puzzles that give you new ways to use your brain.

The plot in a nutshell is that you’re called to a Mediterranean mansion to help an heiress who’s been experiencing paranormal activity which seems to be emanating from the family crypt. You discover early on that this particular family has distinct light and dark sides which are manifested in the home’s interior landscape. Many locations have two aspects which are dictated by existing lighting conditions; there’ll be some kind of lamp, fireplace or other light source that when turned between two settings, shows off the room’s “good” face, or its twisted and demonic one.

Not only is it cool to watch the rooms change before your eyes, it’s fun to recognize how the rooms’ transformations affect their interactivity. You might, for instance, have to open a locked chest when the room’s all creepy and full of veiny vines, in order to access what’s inside the chest when it’s in its friendlier state. It’s a clever way to get more mileage out of the locations since many individual locations are actually two. 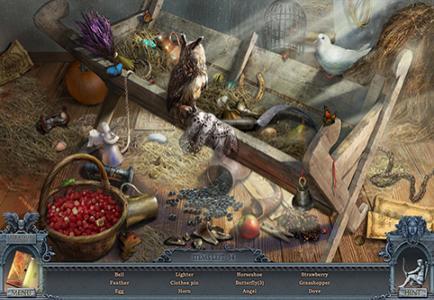 Second to the light/dark mechanic, my next favorite thing about Mystery of the Ancestral Estate is its puzzles and minigames. These feature some truly weird bio-mechanical devices that are fun to tinker with and fun to observe. Although puzzles are repeated in a few cases, overall they present some refreshingly unfamiliar ideas. Finally, my third favorite element is its hidden object scenes. In most games, these are so packed with items they hurt your eyes and stretch credibility. Orneon has managed some really elegant scenes here, scenes that have a third of what you’re used to seeing in a hidden object scene, but somehow are just as challenging. The best two of them reward you for finding and/or replacing all the items by letting you activate a crazy-complex Rube Goldberg-like machine. Aside from hitting the mark in terms of core concept, hidden object scenes and puzzles, the game also features nice, easy-to-tune-out music and some crisp, colorful graphics.

Things that aren’t as praise-worthy about Mystery of the Ancestral Estate are its short, shallow bonus chapter and its paltry extras. The bonus chapter is weird from the beginning since the main game ends in a way that more or less contradicts the beginning of the bonus chapter. Beyond that, the bonus chapter is basically a forty minute “collect five artifacts to save the souls” throwaway. This is really too bad, since the only other extras in the Collector’s Edition are a strategy guide (that I never needed to refer to) and a handful of the minigames you’ve already played.

Secrets of the Dark: Mystery of the Ancestral Estate is a way better game than I expected it to be. It’s stylish, surprising and well-constructed. Still, its story set-up is lazy and its bonus chapter and extras are a big, fat let-down. There’s little reason to spend the extra money on this Collector’s Edition—unless you’ve got an ancestral inheritance of your own.