Secret of the Sea Review 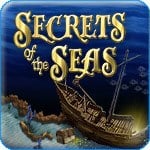 A sunken shipwreck, a mysterious diary, an ancient artifact seemingly lost beneath the ocean’s swirling waves… All this and more you’ll discover in Secrets of the Sea, an innovative puzzler which delivers a knockout one-two punch combination with its killer presentation and engaging play. Starting off with a bang – note the high-quality voice-overs, storybook intro, colorful animated backgrounds across which water ripples and fish swirl – and building to a catchy climax, it’s a surprisingly great fit for any gamer.

As told through a series of cinematic speech clips, players must follow in the footsteps of Juan Ruiz Hidalgo, entrusted once upon a time with safeguarding a fabulous treasure, the crown of the last Inca king. Having lost the priceless relic during his travels and been unable to recover it, the task falls to you to dive deep beneath the surf and retrieve the missing item. As in many brainteasers, doing so merely involves making patterns by adjusting the position of icon-bearing tiles that appear on varyingly-shaped grids. However, rest assured that the unexpectedly curious and catchy way in which you’ll do so here leaves competitors looking all wet.

Rather than rotate squares or tug rows or columns into shape, you’re instead in control of Tetris-esque shapes, each of which contains several tiles bearing different stamps. Moving them about with the mouse, clicking its right button to rotate these objects and then tapping the left button to place them, your goal is to make squares, rows or vertical columns containing four or more similarly adorned tiles. (Note that any protruding portions of these shapes that don’t fit on the playfield are simply discounted.) A deceptively simple mechanic, this basic device nonetheless creates the possibility for considerable gameplay depth, as you’ll see upon attempting to clear each stage of colored tiles (removed when matches are made atop them), the victory condition for every scenario.

Mind you, the clock – depicted as a bubbling air tank – shrinks with each passing second, unless you’ve chosen to play the game in Untimed, rather than Adventure, mode. And, of course, that creating massive chain reactions by making matches (thereby removing items like pyramids, pendants and shields from the board and causing higher-situated objects to tumble into their former place) is also a possibly.

What’s more, you also have several handy perks on your side in the form of multiple power-ups, earned by collecting gold coins via constant matchmaking. Just a few such extras include whirlpools which swirl across the screen, shuffling objects; lightning bolts that randomly arc about, obliterating 10 tiles; and anchors that fall heavily downward, crushing entire rows. The best part is that these rewards aren’t just awesome to look at, shaking the screen and literally blowing cross- or owl-shaped icons to bits. They’re also really clever and useful. In addition, bonuses are doled out steadily enough to offset the ever-increasing difficulty level, yet at an infrequent enough pace as to make their appearance that much more meaningful.

Progressing along the neat-looking treasure map – displayed atop the backdrop of a boat pitching and rolling along the sea – that passes for an in-game level hub really feels interesting as a result. If you’re not looking forward to the next challenge or hidden power-up, chances are you’re keen on hearing more of the brilliantly-delivered story. We just wish there was a little more of it to listen to between each individual stage vs. entire areas. Then again, between the title’s solid handling, smartly increasing challenge level and slick sound effects (everything sounds like it’s literally been dunked in gallons of water), who’s complaining?

Secrets of the Sea isn’t what you’d call a revolutionary or even particularly forward-thinking title – the game just takes the standard formula for a pattern-matching mindbender and does it better. Kudos should therefore go out to its developer for taking the time and effort to polish everything to a keen shine; it almost brings a saltwater tear to our eye.