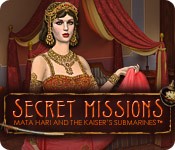 If James Bond were a woman, he would probably be a lot like Mata Hari. The seductive female spy, who works for the Allied forces during World War I, must use her skills to infiltrate a German U-Boat operation in Frogwares’ Secret Missions: Mata Hari and the Kaiser’s Submarines.

Similar to Dream Chronicles and Alabama Smith in Escape from Pompeii, Secret Missions is one of those games that’s not quite a hidden object game and not quite an adventure game, but instead is somewhere in between. During each of the 14 levels you’ll search rooms for items from a list based on their silhouettes that can be added to your inventory and used to solve puzzles elsewhere in the scene. (Such as using electrical tape to repair faulty wiring.) These aren’t "hidden objects" per se, but some of them are quite miniscule or partially obscured so they’re a little harder to find.

Besides snooping, the other thing Mata Hari does is use her feminine charms to "seduce" suspicious men to get information from them. This involves a dress-up mini-game where you enter Mata Hari’s closet and browse through clothing, hats and accessories to choose the correct outfit based on information you’ve provided about each man’s taste in women. For example, Major John Williams likes eccentric and exotic women, and the color green.

Sometimes Mata Hari doesn’t have enough information about the man right away, so you have to search his room or examine a photograph of him with a magnifying glass to look for clues. In the game’s Easy mode the game tells you when you’ve selected the correct outfit, but in Hard mode you just have to take a guess. And unlike the excellent dress-up game Jojo’s Fashion Show, it seems like there’s only one correct clothing combination in Secret Missions, even though other outfits seem to fit the games’ vague clues well enough.

There are a couple of interesting recurring puzzles in between levels; one is based on color and the other involves connecting nodes on a grid using a line that can only travel horizontally, vertically or diagonally.

The game offers unlimited hints, with a hint meter that recharges over time. Sometimes, though, the hints aren’t all that helpful because it will simply illuminate a spot that you’re supposed to use an item on but not tell you which item to use or when.

Secret Missions also suffers from an interface that just isn’t as pleasant to use as other adventure games. When you use the wrong item in a location, or simply click on a hotspot to investigate, the game doesn’t offer any information or hints but just repeats the same line that you can’t use it there. When a text box appears (and they occur pretty frequently), you can’t just click anywhere on the screen to make it go away but instead you actually have to scroll your mouse over and click on the text box itself. Instructions are a bit vague at times, and text betrays the occasional typo like "Start the carreer."

You can skip any puzzle, which might be required for ones where it’s just not clear enough how to solve it. A file-folder sorting puzzle early in the game had me so stumped that I just decided to skip it and have the points deducted from my score total (either that or the puzzle itself is simply glitched.)

Provided you don’t get stumped on any puzzles, the game can be completed in a couple of hours. It’s hardly the kind of game that will keep you riveted for weeks, but diehard fans of the genre might derive some enjoyment out of it.