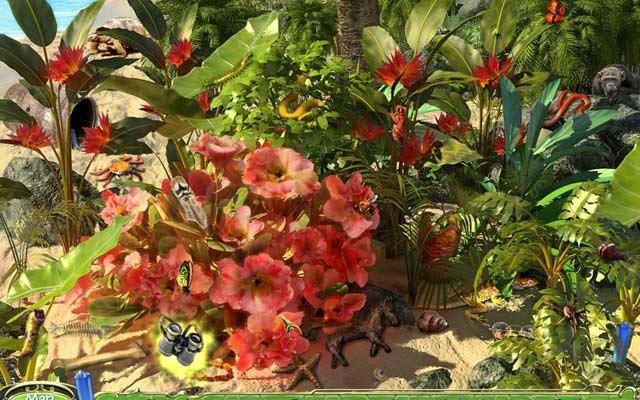 It’s a familiar story: someone flies through the Bermuda triangle and ends up getting stranded on a seemingly deserted island. Pretty standard stuff as far as hidden object games go. And that’s probably the best word to describe Secret Mission: The Forgotten Island: standard. It doesn’t do much to differentiate itself from all of the other adventure/HOGs out there, but it’s a solid package that plays it safe and is fun while it lasts. Just don’t expect to be blown away.

You take on the role of Chanel Flores, a researcher who took an unexpected detour and ended up on the titular forgotten island. Stranded, she begins to scan her surroundings in an attempt to figure out a way home. But it turns out that the story isn’t really about her. Instead, as she collects a series of seven mysterious crystals, she learns the story of a shipwrecked captain and his ill-fated relationship with a native islander. It’s a tragic, albeit predictable, love story that isn’t given the depth it deserves. Instead, it’s simply told through several very brief cut scenes that leave you wanting more and an ending that feels rushed. 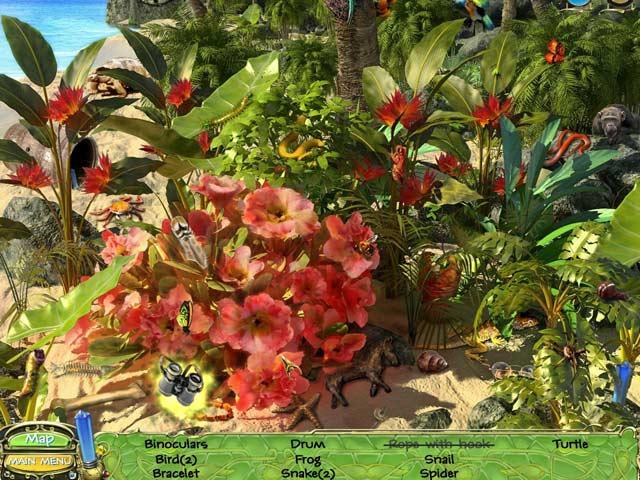 When you first start up the game you’re given two difficulty choices: easy or hard. The game remains largely unchanged no matter what setting you choose, with the only discernible difference being that the easy mode gives you more hints and a faster hint meter recharge. But you probably won’t need to go the easy route as the hidden object sections of the game are fairly easy. The art style is nice and clear, so picking out most objects isn’t that difficult, aside from a few oddly named objects (just what is a manipulator anyway?). The only real annoyance with this aspect of the game is the lack of variety, as you’ll constantly be finding the same objects over and over again. Expect to find yourself plenty of butterflies, ladybugs, and snails over the course of the game.

Often you’ll have to use the items you find to complete a certain task, such using dynamite to blow up a giant rock pile or finding parts to repair an ancient mechanical device. These sections, while very basic, do a good job of making it seem like you’re actually finding objects for a reason.

Where things do get a bit challenging though, is when it comes to the mini-games. These frequent diversions have you doing everything from unlocking a chest to completing a maze, and range in difficulty from pretty basic to downright frustrating. A big reason for the frustration with some of the games is the lack of direction the game gives you, often relaying nearly useless information such as “find the right direction.” Thankfully, there’s an option to skip puzzles if you are having trouble. 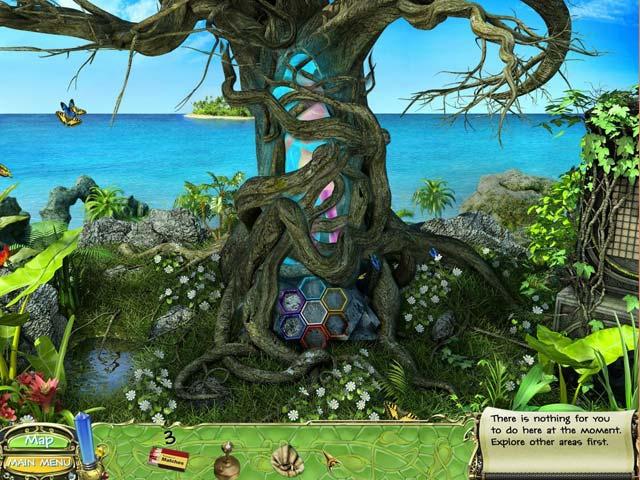 The island is divided up into a series of different areas, which you can travel to either by manually moving from one place to the next, or you can (thankfully) simply use the map to click where you want to go. The game does a good job of guiding you along, as areas of interest are marked with an exclamation point, and each area features a checklist of things you need to do to move on. It make seem like a small thing, but it really helps to eliminate the frustration of not knowing what to do next, especially if you’ve stepped away from the game for a while.

Visually, Secret Island looks like your typical HOG, except with a slightly brighter color palette thanks to the tropical setting. The different areas in the game are all richly detailed and feature neat little details like crawling insects or swimming sharks. It’s nothing unique or spectacular, but it gets the job done. The only real issue with the way the game looks is the cut-scenes, which don’t quite mesh with the rest of the game.

It’s not that Secret Islanddoes anything terribly wrong that’s the problem, it just that it doesn’t excel in any particular respect either. The game is the epitome of average. The three or four hours that you’ll spend searching the island for all its secrets will be enjoyable, they just won’t be very memorable.