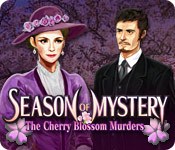 Square Enix is a Japanese publisher best known for creating the epic role-playing series Final Fantasy, which is why we  were surprised when they released the cute puzzle game Yosumin! as a digital download earlier this year. We were surprised again to see Square Enix’s name on the title screen of Season of Mystery: The Cherry Blossom Murders, a hidden object game set in 19th century Japan.

Season of Mystery  is told from the perspective of Mrs. Irene Pemberton, a Western woman who embarks on a new life in the Far East with her husband, Richard, after he’s transferred to the Japanese Embassy in Tokyo. Their peaceful new life is shattered when Richard is found dead in their home one evening in what seems like a suicide, but Irene knows her husband better than that. She suspects foul play, and sets out to prove it and clear his name.

In typical hidden object game fashion, you’ll search cluttered scenes for a variety of items on your list, such as a quill pen, umbrella, rabbit and xylophone. While not all of the items "belong" in the scene, they’re all cleverly incorporated into the setting. A "river," for example, is not an actual river pasted awkwardly into the middle of an office, but a picture of a river on the cover of a book. A "rabbit" might be a real rabbit, or a statue on a bookshelf.

The hint system is clean and straightforward as well. When you click on an item in the list, its silhouette will appear to make it easier to find. (The penalty for too much random clicking is that this feature will be disabled for a short time.) If you’re still stumped, you can use a hint to reveal an item’s location.

The hint meter takes a couple of minutes to recharge, which is admittedly a long time, but it’s not really much of a negative owing to the fact that the scenes are presented in a clear, hand-drawn style that’s attractive and easy on the eyes. As a result, the objects are well-hidden but not unfairly or confusingly so, and, because everything is hand-drawn, the scenes don’t look like backgrounds filled with the unattractive, blobby clip art of some lesser hidden object games.

There’s the occasional straightforward inventory puzzle as well, although the game doesn’t rely on them too much and it’s always obvious what item you’re supposed to use where (such as a shovel to dig up part of a lawn). You’ll also get to play a handful of enjoyable mini-games and logic puzzles, like figuring out which house to visit by following the rickshaw driver’s clues.

While the game’s more generic locations – such as the ones set in various parts of the embassy – are a bit dull, Season of Mystery boasts some beautiful scenes too, like a quaint rickshaw stand with beautiful pink sakura (cherry blossoms) in the background, a colorful kimono shop, and a bonsai garden. Although there isn’t a huge variety of music, the soundtrack is gorgeous and well-suited.

Unfortunately, the amount of repetition in the game feels disappointing. Since there aren’t that many scenes to begin with, they start to repeat themselves frequently as Irene circles back to them during the course of her investigation. There aren’t a huge number of objects to find either, so you’ll see the same bottles, bread, grapes and firewood in more than one place. Items are always in the same place each time you go back to a location, too.

This repetition is the game’s only big drawback, which is a shame because it does so many other things right. Seasons of Mystery: The Cherry Blossom Murders is definitely worth a try for those craving a no-nonsense, attractively packaged hidden object game with a mystery story to unravel.