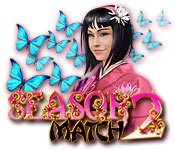 The Snow Queen in the original Season Match returns. In Season Match 2, Prince January has taken over his sister’s fairytale kingdom and turned it into a nightmare. He also holds all of the artifacts giving him control of the seasons. Ice and snow covers the castles of the three princesses of seasons and the Snow Queen. The kingdom’s little dwellers — ladybirds, bees, dragonflies and butterflies — struggle to survive the bitter winter.

In this match three game, players work to clear the grid to reach the magical artifact under guard. Each level contains three goals: Clear the grid, defeat the guard, and reach the artifact. Just match objects over and next to the crystals and other pieces to destroy them.  You must destroy a set amount of each type of crystal to tip the scale in your favor and defeat the guard. The artifact appears after you defeat the guard, but you still need to break down the pieces protecting it from release.

When you meet all three goals and finish before time runs out (unless you play relaxed mode with no timer), you play a mini-game that has a tie in with the story and the enemy. For example, one enemy leads the wooden soldiers. After defeating him, you play the mini-game to burn down the tree soldiers with the torch.

Most mini-games involve finding the same type of hidden objects and three gold coins. You don’t find the same object every time you play the mini-game. In one scene, you wake up flower buds. In another, you light candles. Still another has you track down all the vials. The gold coins look meaningless unless you enjoy feeling proud of finding all three in every hidden object mini-game.

The nice thing about these mini-games is no two are the same. Most involve finding hidden objects, but the items always change. The mini-games at the end of a round are the hardest and most challenging part of the whole game. It doesn’t take much to win the matching games as you’ll rely on bonuses or power ups only on occasion. This is probably a good thing because it’s not easy to remember what each does.

The end of round mini-games varies. In a couple of them, you need to find something in a pile. For example, a butterfly appears and you need to dig through the sea of similar butterflies to find the exact match. These games take more work because you’re working to defeat the enemy. A couple of them make a player jumpy!

Not only does the game have seven different types of mini-games, but it also has seven colorful backgrounds and a different artifact in every level with 35 different guards protecting them. When making big moves, the sound effects help you celebrate as they’re snappy.

Season Match 2 tells the story using a not so easy to read font style, which does match the theme’s style. However, this font works better for titles and buttons rather than all of the content. The game needs capitalization, punctuation and grammar work. It contains misspelled words like collekt and phials. Every time you run out of moves, the game announces it with "No moved."

Here’s a sampling of some phrases in the game. "Now that the guard is defended and his magic doesn’t work." "I feel the turn for the better." "You’ve set up a new record." Sometimes, the game’s first language slips in when you lose and shows up in Russian instead of English.

As for the extra clicks, when completing a level — the Season Match 2 provides a story update which you click after you’ve read it. And it clears the story and you have to click again to play the next game. It seems small, but it’s annoying.

Season Match 2 surpasses the original in overall production values. It also tells the story nicely in bite-size pieces. It may take a few levels of play before the story comes together, but it does and blends well with all the action in the game.  Season Match 2 may not challenge every match three fan, but its variety and charming scenes could capture their attention. Those new to the match three will find this one worth trying and might open themselves to a whole genre.

The Treasures of Mystery Island Review