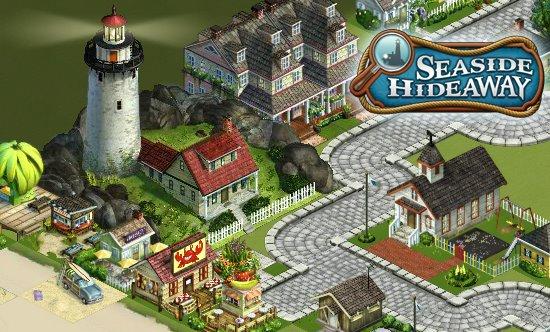 In the last couple of years, social games have really evolved. Having started as simple games conveyed mainly through text, they’ve become increasingly complex, good-looking and varied. We have social game developer Zynga to thank for creating one of the best known types of social game—the social city (or farm or castle) building sim. In Seaside Hideaway, Pow Games, publishers of hidden object game Dream Inn: Driftwood, attempt to recreate Zynga’s ubiquitous (some might say “insidious”) location management mechanics and succeed, albeit all too well.

Your goal in Seaside Hideaway is similar, if a bit more expansive, than that in Dream Inn: Driftwood. Where in the previous game your objective is to restore a specific inn, here your efforts are directed to restoring an entire seaside village. Much like other games in the genre, you start with a small central core: in this case—a town square with its accompanying brick city hall—and build out from there. Where older social city sims have you earning money to build by clearing space and visiting neighbors, a new trend in the genre is to have you earn money by playing hidden object scenes. Seaside Hideaway embraces this idea, and right away sets you to searching for items in appropriately seaside-y locations like the harbor and the lighthouse. Here’s where, for me, the game gets utterly tedious.

First let me say that I’m a big hidden object fan. Second, let me acknowledge that Pow Games’ previous title offered an unapologetically straightforward hidden object experience with very little story or adventure, so it’s no surprise that they’d make the hidden object hunt the core of Seaside Hideaway. The problem is, there’s an absurd amount of repetition built into things here. This problem is not unique; a lot of other social hidden object games employ the notion of replaying hidden object scenes with the intent of scoring higher by finding things faster. The issue in all of these games is that, sooner or later, the speed at which you can complete a particular scene hits critical mass and there’s virtually no way to make playing it again an interesting experience. 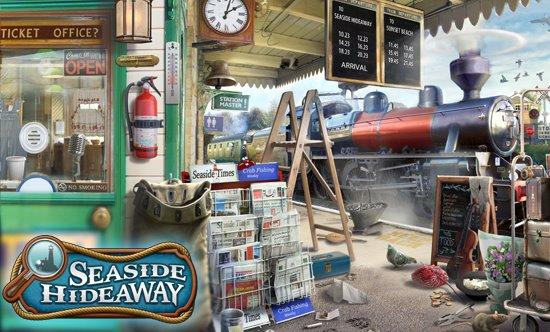 This mechanic in Seaside Hideaway is a serious grind, and unfortunately it’s the only way (aside from spending loads of real-world cash) to progress. The whole thing becomes a vicious circle; to build you need money; to get money you have to play hidden object scenes; to unlock more hidden object scenes you have to build. Further, playing scenes costs a set amount of energy, and there’s only a set amount of cash you can earn for playing each scene. This creates a system that forces you to pick between spending too much real money buying energy or stopping playing the game altogether. Well, to be fair, you do have a third option: alienating all of your friends by bugging them constantly for help.

This is one aspect of social games that drives me totally nuts. I know—that’s what makes them “social”, but to me, disallowing a player from playing on his or her own just isn’t hospitable. Games shouldn’t force-feed me the social equivalent of brussel sprouts and in fact, this approach—punishing solo players by preventing them from moving on in the game unless they annoy people or constantly pony up the cash—is already being dropped by the latest generation of social games. With hundreds (thousands?) of social games appearing every day, developers who want to succeed really need to give players what they want, and that means giving them both a good entertainment value and the freedom to play the way they want to. 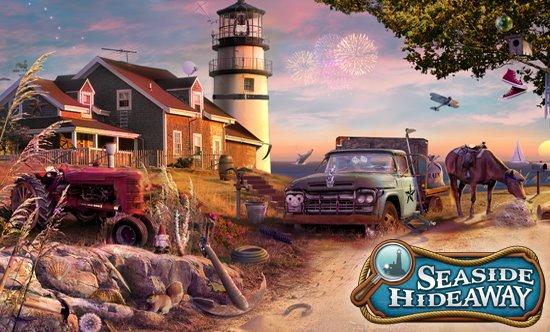 Even within Seaside Hideaway’s silly restrictions, I could still get on board if playing it felt more rewarding. Sadly, it doesn’t. As mentioned before, it’s basically an endless round of hidden object scene/build, with nothing more to be gained. Sure, in time your village gets bigger and you can challenge friends (if you still have any) to timed hidden object challenges. But there’s nothing new though; no reason for gamers well-versed in this kind of simple city building mechanic to play this specific game. Worse yet, by the fifteenth time you’ve played through a single hidden object scene, things start to feel like work, and if work was what we were looking for when we played games, there’d probably be more games about road resurfacing and database management.

Seaside Hideaway isn’t a bad game; it just isn’t special. While its graphics are nice enough and it has a fairly charming theme, at its core it’s tedious, unrewarding, and built on a shaky foundation made of what’s quickly becoming an obsolete approach to the social free-to-play model. Gamers looking for a truly free-to-play experience that doesn’t force them to bother other people, and world-weary social gamers who’ve already done the rounds of the “Ville” games, are better off getting their casual entertainment somewhere else.