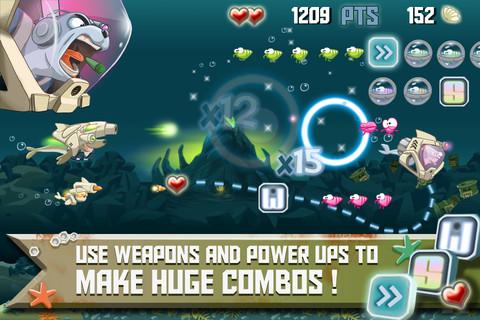 Seal commandoes and mutant krill. What more could you want in a game?

It’s obvious at first glance that Seal Force was made by people who watched —and loved— cartoons in the 1980s. Everything, from the plot to the style to frantic action on the screen, feels like it’s come straight off of a Reagan-era television set and landed on your iPhone. Oh, and the game’s, like, totally radical and fresh, dude.

Seal Force is… well, it’s basically everything that was good about the animated shows of my childhood. The intro movie (which you have to watch below) is straight up ridiculous and amazing, featuring a backstory and theme song that is comparable to the awesomeness that is the intro to the 1980s Teenage Mutant Ninja Turtles animated series.

Here’s the general plot: Seal Force is a crack team of seals that travels around in a giant whale, which doubles as the group’s headquarters. There’s Lobo, who seems to hang out in the background and serve as quartermaster, and the trio of Fonzie, Milo, and Sarge (who steers the whale!). It turns out that Seal Force is working to protect the seas from the “evil krill mastermind” Krillian. Apparently Krillian has infected the waters with a “neon-colored” virus that is turning all the other krill of the world into a mutant brainwashed army.

Aside from the gleefully over-the-top scenario, there’s another reason that this title will undoubtedly remind you of the cartoons you grew up with: It looks and sounds fantastic. The in-game graphics are cartoony in all the right ways, complete with bright colors and excellent character designs. The music and sound effects, too, are wonderful. What’s especially surprising is the fact that the various seals all have dialogue for you to listen to during gameplay.

Seal Force combines side-scrolling shooting action with line drawing elements. On the left side of the screen, you have your three seals, each sporting a neon color; the mutant krill, meanwhile, come streaming in from the right side. In order to prevent the krill from crossing the screen and “krilling” you (that’s the game’s groan-worthy pun, not mine), you have to draw out a path that will get them to slam into enemy sealife with a corresponding neon color. Aside from the neon krill, giant crustaceans (which, honestly, look almost like sharks) will come speeding towards your team.

Now, this is only the first step to taking out your opposition. Knocking out multiple enemies at once will trigger combos, which spawn shockwaves that can wipe out even more opponents. Additionally, you can pick up random power-ups and extra lives as the game progresses; the latter are actually pretty delightful, because the already great-looking character models become even more impressive (Sarge’s submarine-like propulsion suit is a particular highlight). 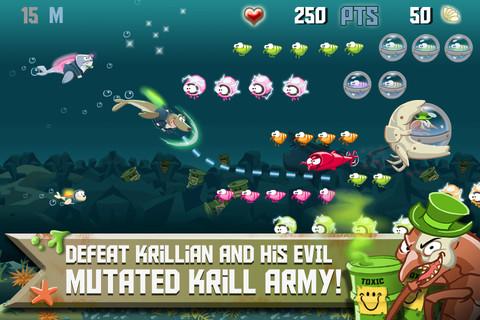 Game progression is accomplished by earning stars, courtesy of accomplishing goals that seem to be randomly assigned. These goals can range from killing a certain number of krill in one play session to not using one of the seals for a specific amount of time to racking up an obscene number of combos. When enough of these mini-missions are completed, you’re alerted that you’ve reached another checkpoint and can purchase new Seal upgrades with shells (the in-game currency) before you continue on with your adventure.

Collecting shells is somewhat slow going, but you also have the option of buying more and leveling up your strike team faster. It’s pretty standard stuff, though there’s an option to earn shells for free by engaging in certain activities like signing up for advertised services.

Seal Force is simply a joy to play. The gameplay is incredibly well-done, but it’s the overall feel here that makes this such a winning title. It’s just almost impossible not to find yourself grinning while you play it, which is pretty much the only appropriate reaction when it comes to watching commando seals take on armies of mutant shellfish.