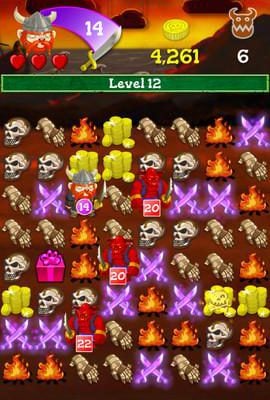 Scurvy Scallywags is one trip you won’t want to miss.

Veteran swashbuckler Ron Gilbert knows a thing or two about pirates. He created the classic PC game The Secret of Monkey Island as well as its successor, LeChuck’s Revenge. Sometimes, though, a sea-dog needs to dock in a different harbor. Aside from its pirate theme, Scurvy Scallywags, a match-3/combat game for iOS, is a bit of a departure for Gilbert and his partner in crime, Clayton Kauzlaric. Happily, it’s a fun game that boasts the charm of a siren chorus.

The premise for Scurvy Scallywags is a bit of an oddity. You’re a pirate in a pirate-based musical that’s tanking fast. You need to recover verses of a sea shanty that will theoretically make the audience stand up and cheer. There are other production issues that need to be addressed too, including leaky pipes and uninsured, injured actors who require bandages. 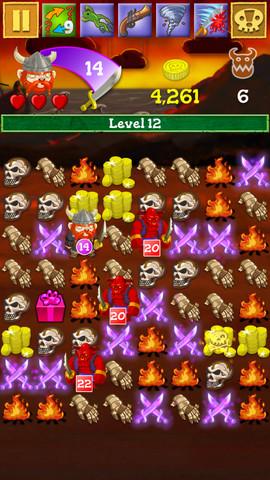 What this boils down to, is you can expect to spend lots of time on match-3 game boards. The oldest, most basic rule of the match-3 genre applies here: exchange pieces until you get three or more to match up, whereupon they disappear. Easy as downing a flagon of grog, right?

Not quite, landlubber. The boards of Scurvy Scallywags are populated by pirate ghosts, scorpions, golems, and other horrors. The game pieces that you swap go towards building up your buccaneer so he or she can slay the monsters lurking on the board. For example, matching up three swords will increase your attack power. When your attack power is higher than a particular monster’s power, you can kill it once you’re next to it. If your attack power is lower than the monster’s, you still do some damage, but you lose a precious heart.

Luckily, Scurvy Scallywags offers skills and power-ups a-plenty that will help you through the salty muck. Some skills can be recharged with gold, whereas others recharge automatically when you make a certain number of matches. You can also outfit yourself with clothing that offers stat boosts. 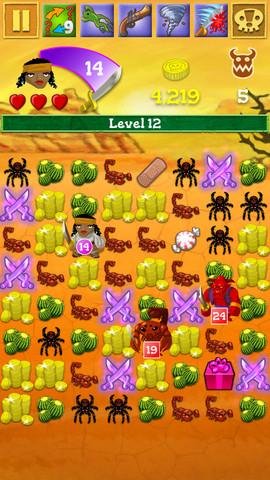 Scurvy Scallywags‘ twist on the match-3 genre will draw you in, and its sharp writing will keep you landlocked. You can bestow your pirate avatar with all kinds of goofy-looking accessories, and the characters in general are fun to keep company with. The game’s music and sound effects shine, particularly the collectable sea shanties that mock pirate lifestyle (hey! No cracks about the beard, matey!).

Be warned that Scurvy Scallywags isn’t a laid-back match-3 title, though. In fact, getting through a single board can take ages because you need to build up your strength and then position yourself next to your foe by way of matching tiles. Once you knock off an enemy, your attack power goes down, meaning you’ll need to build it up again before you can take on the next baddie. If you’re unlucky and your board doesn’t offer up many sword tiles, you can expect a long haul.

Scurvy Scallywags may not be a perfect voyage, but you should expect some rough waters when you travel with sea dogs. Raise a bottle of rum to Ron Gilbert, King of the Pirates.