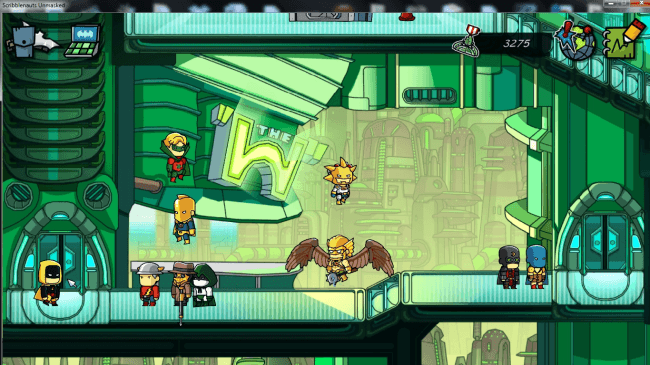 The pen is mightier than super strength

In the ultimate example of the pen, or rather pencil, being mightier than the sword, Maxwell has used his magic notebook to entertain plenty of gamers in the Scribblenauts games. But even the most successful series need a spark to re-energize them at times, and Maxwell gets a literally super powered one in the form of the thousands of characters who come to life in Scribblenauts Unmasked: A DC Comics Adventure. It’s an awesome if sometimes uneven combination of imagination and adventure that’s sure to excite the comic geek in just about anyone.

If you’re a longtime DC fan, you no doubt know that Barry Allen was inspired to become The Flash because he read about Jay Garrick in comic books as a kid. See, meta was cool all the way back in the 50s! They eventually made comics history by crossing over with each other, and a similar setup is used to combine the powers of Maxwell and his sister Lily to get them to the DC universe. There’s just one big problem: Lily’s globe shatters upon arrival, scattering the Starites inside and forcing the siblings to team up with their four-color idols to get them back before they fall into the wrong hands.

Your quest will take you to various famous locales, including Gotham City, Metropolis, and Oa, home planet of the Green Lantern Corps. Each place has a main mission that involves helping a famous DC hero defeat one of his or her arch-enemies, who have the assistance of Maxwell’s Doppleganger. In-between the storyline bits, there are plenty of random citizens, heroes, and villains you can assist to earn reputation points. Those are needed to unlock new locations and costumes that grant Maxwell the powers of some iconic characters – also Aztek, who doesn’t quite qualify as iconic.

Scribblenauts Unmasked builds on Maxwell’s previous adventures by giving him the ability to create objects by writing them in his notebook and to modify them with adjectives. The big addition is an incredibly deep library of DC lore, so if you want the JSA to show up (and why wouldn’t you?), all you need to do is type “Justice Society” into the notebook prompt, and voila: Hawkman, Dr. Mid-Nite, Sandman, the Earth-2 Flash and Green Lantern, and even the Spectre show up. The game prompts you in situations where there could be some ambiguity – you’ve got a bunch of choices if you want to summon Batman, for instance – and equipment like Green Arrow’s bow or vehicles like Blue Beetle’s ship are fair game too.

Just using the notebook and testing your knowledge of DC minutiae can provide hours of fun. Adding to that is the Hero Creator, where you can actually take the parts from different characters and combine them Frankenstein-style to generate and save your own creations. You want Firestorm’s head on Cyborg’s body with Booster Gold’s limbs? Knock yourself out, and give the new hero specific powers and animations while you’re at it.

As you might surmise, this makes solving some of the problems you encounter fairly simple. The combat gets especially easy at times since Maxwell’s costumes are powerful in their own right, and back-up is always just a few words away. The storyline missions counter this by limiting what you can do, and Superman’s fifth-dimensional pest Mister Mxyzptlk does the same thing to the normal zone quests by challenging you to accept certain limitations in exchange for extra reputation. You’ll also incur penalties for using the same words too often.

That’s fine, even though it feels like Thanos willing himself to be less omnipotent with the Infinity Gauntlet (if you’ll forgive the mixing of some comic book metaphors). A bigger problem is the wonky controls. It’s way too easy to accidentally attack someone friendly, turning them against you and making combat a chaotic, sometimes haphazard affair. Other times things will simply glitch or get stuck, forcing you to reset the zone and start from scratch. The game also has an annoying habit of asking if you’d like to move on to a new location when you’re already busy doing something, even if you’ve only been in your current spot for a few minutes. And the open world play is partially illusory; it’s easy to feel like you’re just treading water, grinding out reputation until you can advance the story. 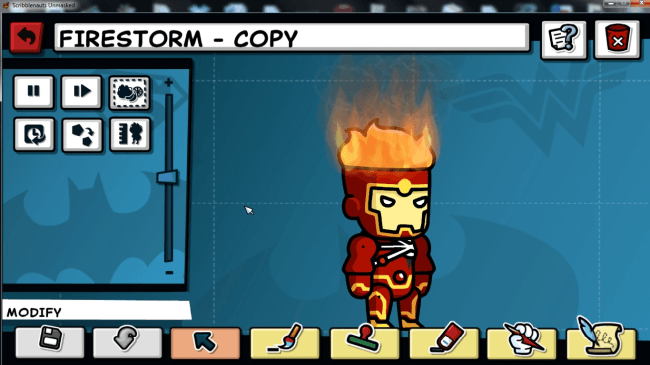 As grinds go, at least this is a pleasant one thanks to the many humorous details thrown in. Whether it’s Guy Gardner asking for help proving he’s a good cook, or a hero needing assistance impressing his crush, the little stuff ends up making you smile. It’s also inherently fun seeing the DC universe interpreted in the Scribblenauts style, and it goes without saying it’s one that players of all ages can appreciate.

Ultimately, you’ll probably get out of Scribblenauts Unmasked something equivalent to what you put into it. Combining the DC heroes and villains with Maxwell and Lily turns out to mostly be the smack-yourself-in-the-forehead-because-it’s-so-obvious move it seems like it would be, and if you’re a fan of the comics, you’ll thank Fifth Cell and Warner Bros. Interactive for doing it.