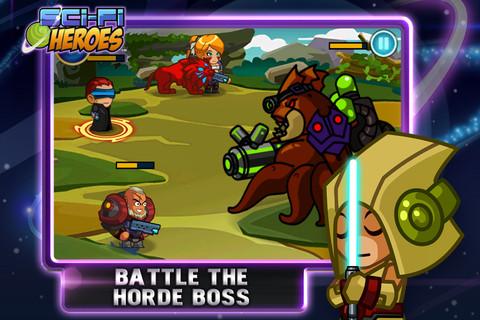 What’s more beloved than an awesome sci-fi flick? The best kinds come with a great balance of action, adventure, storytelling, and a little sense of humor. Sci-fi fans know the importance of poking fun at the genre that they love so much. As entertaining as it is to argue the scientific intricacies that could make our favorite fantasy elements a reality, it sounds pretty ridiculous to anyone outside of that world to listen to. Sci-Fi Heroes understands that and aims to bring a great balance of humor and believable sci-fi environments to its players. But does it get the geek factor, or miss its mark?

Sci-fi storytelling is full of clichés. They aren’t so much frowned upon as they are embraced when done the right way, and Sci-Fi Heroes has the tone down pat. Set in a galaxy where four peaceful planets come under fire from invaders, it is now up to the player and his team of super-powered misfits to band together and restore peace to the land.

The story is introduced with a sharp and witty narration from Zero Punctuation’s Ben “Yahtzee” Crosshaw, and he sets the stage perfectly with his typically fast-paced speech and biting commentary. Between the narration and the witty dialogue between characters, it’s clear from the start screen that Sci-Fi Heroes understands the genre, knows exactly how to pay tribute to it, and does so consistently while doing it well.

Of course, there is the whole gameplay aspect to Sci-Fi Heroes. It is, after all, a game. It’s a team-based shooter, specifically. You are in charge of the entire party, controlling the main character, his healbot friend, and other soldiers in the war for peace. Control consist of dragging to move the characters and simple tap commands for different actions. Tap on an enemy to attack. Tap a character to select them and tab their action button to use a given power. Tap and hold on the heal bot to bring up options for healing teammates.

It’s all simple enough on the basic levels, but when battles get a little more intense, it can be easy to get overwhelmed. There are also some spotty moments when it comes to certain actions, like a few drags that didn’t register that should have and as a result cost us a bit of health.

While the controls may not kill you, the difficulty curve sure will. Sci-Fi Heroes cranks up the challenge after the first few levels, and the world comes crashing down around you, and no amount of firepower seems to be enough to win a level on your first try. Grueling battles will ensue and your will to play the game without making some in-app purchases begins to lower. Couple this with the fact that Sci-Fi Heroes uses a time-based recharging energy system that can be sped up with real money, and it starts to become clear that this title would like you to pony up some cash. You don’t have to pay to play, but get ready for some game-enforced breaks when you might not want them.

Sci-Fi Heroes is a title that gets to the heart of every sci-fi fan in its tone, presentation, and storytelling. It’s fun, funny, action-packed, and has the good sense to not take its own lore too seriously. The gameplay is more than passable and is fun despite some shortcomings in control functionality. The real barrier to entry in this title is the in-app purchases. Forcing players to take a time-out so energy can recharge is a great way to push their impatience over the edge, especially when you combine it with difficult levels that then need to be repeated to stock up on enough coin to make some upgrades. That’s an offense that we’d expect the game’s narrator (and famed game reviewer) Yahtzee Crosshaw to make a note of in his review.

Mystery of the Ancients: Curse of the Black Water Review

About Love, Hate and the other ones Review