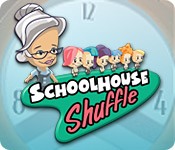 Short of decontaminating radioactive zones or terraforming planets, we can’t think of a process more labor intensive than keeping feisty toddlers on schedule, let along glued to their desks. It’s a topic lovingly explored in School House Shuffle, which places you in charge of a well-meaning but hopelessly overwhelmed staff determined to turn students into the next generation of geniuses.

However, while certainly a smart and sharp-looking spin on the average time management equation, it’s nowhere near the arresting and addictive escapade one would secretly hope for.

To preface the following discourse, we should point out just how much TLC has obviously gone into crafting the title. Viewed from an angled, overhead perspective that sees you looking down on a schoolyard filled with various rooms and facilities, you’ll immediately note the desktop diversion’s fastidious attention to detail.

Characters, designed to resemble ’50s-era cartoons, are all beautifully animated, and – per colorful surrounding backdrops, including transparent glass dome-covered libraries and giant hamster wheels that pass as gyms – sport a catchy retro-futuristic look.

The further you progress in the game, the more tasks inevitably piled on top of you, pupils that must be managed and employees who have to be kept in line to boot. So not only does the title boast the kind of production values you’d expect to see from a full retail product, it also offers just as much challenge.

That said, though, we’re not entirely amused by the outing’s fundamental setup, which requires you to herd groups of hyperactive tykes or individual stragglers to various classes (music, arts, language and so forth) on time.

Bear in mind: It’s troublesome enough attempting to locate, select and manipulate miniaturized faculty members, as staffers frequently get lost behind walls, congregate too closely together and either prove too spry or unresponsive, inevitably ending up at the furthest possible destination from where they’re needed at the worst imaginable time. (And prove prone to falling asleep or wandering off randomly, at that.)

Matters are made even more frustrating by the game’s underlying design, which requires that butts be firmly planted in seats for long, tedious stretches of time.

Basically, your core goal is as follows: Provided a scrolling meter for each group of children, which cycles between classes whose start and end times are indicated by colored bars, ensure kids are present for the indicated lecture. The more children in the classroom from when the bell rings until class is dismissed, the faster you build a gauge that awards report card-style grades, with a “C” average minimum required to pass the level.

The trick is, random events, and behaviors, affect your ability to perform these tasks. Just to name a few potential setbacks and hazards, toilets can break down, tots need to eat and lazy employees sleeping on the job require berating to wake up.

Basically, there’s an entire ecosystem here that has to be managed here, and by an assortment of characters with various abilities at that. (Think chaperones that guide swarms of little ones, hall monitors who ensure stragglers get back to class, etc.) So while it’s possible to upgrade grounds with better classrooms, aesthetic elements and additional workers between scenarios with cash awarded for in-game performance, it’s always a tenuous control you maintain over the proceedings at best.

The catch being that the on-screen excitement alternates between broad patches of tedium, as you wait for classes to proceed, and stretches of manic activity, yet fails to draw a nice balance in-between. What’s more, the action’s also slow to ramp up, leaving early levels much less engaging than those encountered later on, sure to cheese off newcomers.

That said, no doubt about it: A lot more work has obviously gone into building the title than in the typical casual game. However, for all the outing’s depth and decidedly slick window dressing, Schoolhouse Shuffle proves a mite too clever for its own good. Unique and exquisitely packaged, the title’s also saddled with clumsy controls and a host of minor niggles.

As such, try before you buy, and know that we hope that any future sequels will learn from the mistakes made here, not to mention, like featured sprouts, see the franchise eventually grow to reach its full potential.