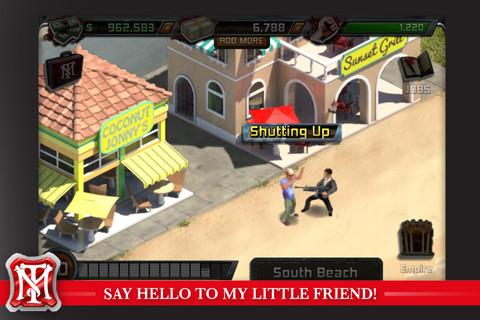 In Scarface, the world is your oyster. The question is, do you want it?

When I heard Scarface was coming to iOS, I assumed the licensees were inspired by the success Rockstar has seen bringing over both Grand Theft Auto III and Max Payne to the platform. Unfortunately, this isn’t a port of Radical Entertainment’s The World is Yours; rather, it’s a watered-down version of Mafia Wars 2 with a Scarface skin. The game offers cheap trappings galore, but this simply isn’t an empire worth killing your friends over.

If you’re somehow unfamiliar with the storyline, Scarface for iOS is based directly on Brian De Palma’s 1983 classic film starring Al Pacino as a Cuban refugee who starts from the bottom of the Miami drug mafia and works his way toward total self-destruction. This particular game pulls photo stills and audio bytes right out of the flick, and there’s a cheesiness about the presentation that is immediate.

The progression of gameplay follows closely to the movie’s storyline, though you will, of course, venture into new territory that helps pad out the game’s length. Your first order of business is a job that pits you against sociopathic Columbians who want both your cash and drugs. Scarface is very much an adult experience, and the game wastes no time dropping f-bombs and describing graphic violence.

What’s sure to be a disappointment, however, to those of us who are drawn to these sorts of very gritty dramas is the fact that the actual gameplay is sedate and safe. Scarface follows along a similar formula to many other social games we’ve already worn down to a nub, yet it still manages to be very barebones. You’ll need to construct buildings and defenses, yet engagements with enemies are simply a matter of clicking on buildings or cars and watching the main character, Tony Montana, animate for a second or two. 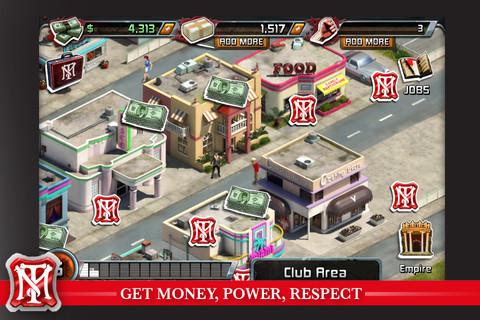 Even if you happen to enjoy the game’s slow pace, the balance of gameplay will completely stop you in your tracks. After just a few minutes of play, you’ll find you’re already out of cash – no cash equals no new buildings or missions. You’re either going to have to sit and wait for your established businesses to yield income, or pay up real money in order to continue on with Scarface’s mundane adventure.

Visually, the game is attractive and offers a surprising amount of variety. The cityscapes are neat to look at, as are the little sprites roaming around Miami Beach. The framerate is solid, and it’s satisfying nabbing your cash and experience at the end of each mission. The voice blurbs, however, that sound off after mission completion are just plain campy. I personally enjoyed the presentation of Scarface, but the low-budget assets definitely take a lot of the edge off of this otherwise sordid tale. 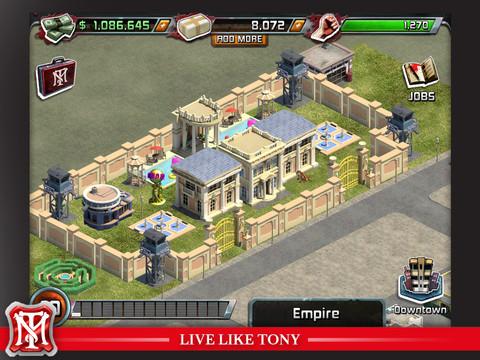 Scarface for iOS has the foundation of a solid social adventure, but it doesn’t expand on its component parts in any interesting ways. The lines of dialogue might be enough to draw fans in initially, but pedestrian gameplay will do precious little to keep them coming back for more. If you’re looking for Facebook-style gaming on the go, there are far better options available to you. This cartel, however, gets busted early by incompetence.