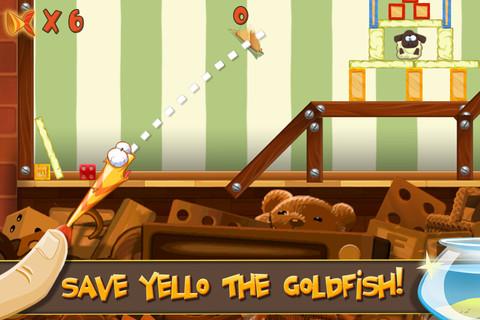 Tormenting an innocent goldfish may be wrong, but it feels so right

I’ve never wanted to torment an animal. That said, I feel a little bad now, since I just had a lot of fun abusing Yello. You see, Yello is the goldfish who stars in Saving Yello, a new physics puzzler from Tactile Entertainment. After flinging the little guy all over the place -as well as freezing him, setting him on fire, and blowing him up— I can safely say that this may be the only time that torturing a pet is acceptable entertainment.

The titular Yello is owned by Mathilda, who is quite possibly the most sadistic 7-year-old in existence. Apparently Mathilda likes to take Yello on “walks” and leave him on the ground. As a result, it’s up to you to get Yello back into his fish bowl by pulling on his tail and shooting him like a slingshot.

At first the game’s maps are pretty straightforward, but they quickly become labyrinthine and cluttered with obstacles and toys. You might encounter a pile of blocks or a structure built out of cotton, or a house made out of what looks like K’Nex building sets. Alternately, there may be a collection of impenetrable walls that you’ll have to guide Yello around.

Yello can snag various power ups to help him get home to his bowl. If you get him to pass through a flame, he’ll be set on fire and can burn up the wooden/cotton items that are in his way. Snowflakes will encase him in a block of ice that will freeze and shatter metal blocks. Hitting pincushions will cause him to grow a bunch of spikes that let him stick to walls and/or ceilings, Yello can also pick up sticks of dynamite that will help him blow up things that sit in his way (though there are also pressure-sensitive bombs that can be hit to trigger an explosion). The most delightful (and twisted) items, though, are the hooks on strings that you have to shoot Yello onto, which will then swing him around.

As you complete each level in Saving Yello, you’ll earn stars which are accumulated to unlock new environments. You get one for just getting Yello back to his bowl, and there are two different score milestones that you need to hit in order to earn all three stars with each level. It’s pretty standard stuff, but it’s usually easy to get at least two stars each time you play through.

The gameplay is both challenging and fun, but what really stands out are the graphics. Seriously, this is a great looking game. The cartoon-like visuals are colorful and goofy; what really takes the cake is how Yello displays a wide variety of facial expressions that are absolutely hysterical to look at.

Overall, Saving Yello doesn’t really do anything new or exciting as a physics puzzler. That said, what it does, it does very well. It’s charming and fun and challenging and it looks absolutely magnificent. You could definitely do worse than add this to your digital library.