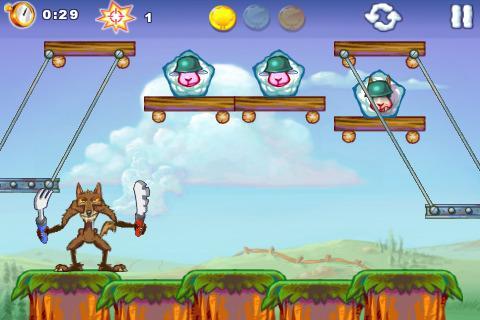 Did you ever see that great wartime movie about those dastardly wolves and their defeat at the hands of the triumphant underdog sheep? Us neither, but Saving Private Sheep from BulkyPix tries to rectify that with goofy fun and head-scratching physics puzzles for the iPhone, iPod Touch and iPad.

You are serving under General Fleece, who orders you to help get his soldiers, condensed into pentagon-shaped operatives, onto dry land by removing obstacles with finger taps. Traps include boxes that will explode, sending your livestock soldier into the stratosphere, complex pulleys and ropes, unbreakable metal objects and even blocks of ice. If your sheep lands comfortably he will pop out and give you a salute. If he falls off the ledge, then the evil wolves get lambchops for dinner. But be careful! You might have a literal wolf in sheep’s clothing (indicated by their pointy ears). In this case, you must send them careening off the ledge.

The graphics in Saving Private Sheep are cartoon style at its best. Everything is detailed and easy to see. The sheep and wolves have definite personalities, and small touches – like a wolf popping up from the bottom with a toothy grin or UFO abductions in the background – make the game feel vibrant. The sound is pretty quiet for the most part, outside of some distant guns firing and some nice military tunes every now and then – but you’ll need the quiet to concentrate on the puzzles.

There are about 80 levels in Saving Private Sheep, varying in difficulty from easy to hard. The physics that govern the gameplay are solid. You’ll never question if the object should have landed differently or if it behaved like you imagined it should. It makes solving puzzles a real treat. After each level you receive a score based on your time and how many taps you had to perform to win the level, and receive a medal based on this score.

The enormous variation in difficulty from easy puzzles to hard puzzles is night and day. Most easy puzzles will be solved without breaking too much of a sweat, but some of those hard ones will give you a tough time. During the first part of the game they are optional, but as you progress they are unavoidable. Coupled with the fact that you can’t skip puzzles (or even get a hint) this can make for some serious hair-pulling.

The weirdest part is the way Saving Private Sheep feels. For some reason the gameplay feels like it’s running in slow motion at times. Granted, it’s nice when there are timed/reflex solutions to a puzzle, but for the most part it feels sluggish. Though not game-breaking, it is odd.