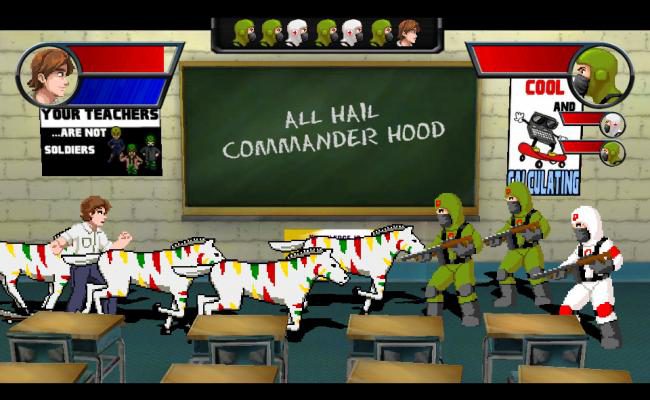 Thanks primarily to the work of Hasbro and Michael Bay, the great pop culture brands of the 80s live on in name, if not always in spirit. Fortunately, the minds at Mighty Rabbit Studios had a more direct dose of nostalgia in mind when they used Kickstarter to fund Saturday Morning RPG, a fun, clever iOS spoof of every show that made kids ask for the toys back when Ronald Reagan was president.

The unlikely, pixelated hero of Saturday Morning RPG is Marty, an average high school student who dreams that the evil Commander Hood has kidnapped his girlfriend Samantha. Armed with only his naïve optimism, Marty proves no match for Hood’s goons. But when a man known only as “The Wizard” shows up with a magic notebook (actually a Trapper Keeper, minus the trademarks), a powerful battery and some unusually potent scratch-and-sniff stickers, he finds he has the power to handle himself just fine as he journeys through the land of Gaia to find his girl.

Yes, you read that last sentence correctly. When Marty runs into trouble, the battery turns ordinary items in his backpack – including things that look a lot like a Care Bear and Optimus Prime – into weapons, while the stickers grant various buffs and bonuses as long as you scratch them quickly enough before the fighting starts.

That’s just one way the game uses the iOS interface in interesting ways. The actual combat plays out almost like the older Final Fantasy games: It’s turn-based, but almost all of Marty’s attacks have some kind of tap or timing-based mechanism to do more damage, and defense requires carefully timed taps as well. Successful blocks also recharge the Magic meter, which allows the battery to be used to power up his offense.

Beating the bad guys in the most efficient way possible grants bonus experience, so it pays to be creative. Enough XP levels Marty up, allowing him to increase one of a fairly standard set of RPG attributes. The money dropped by defeated enemies can be used to buy more stickers in a magic vending machine, but there are other stickers and “weapons” that can be found through exploration or by completing quests. 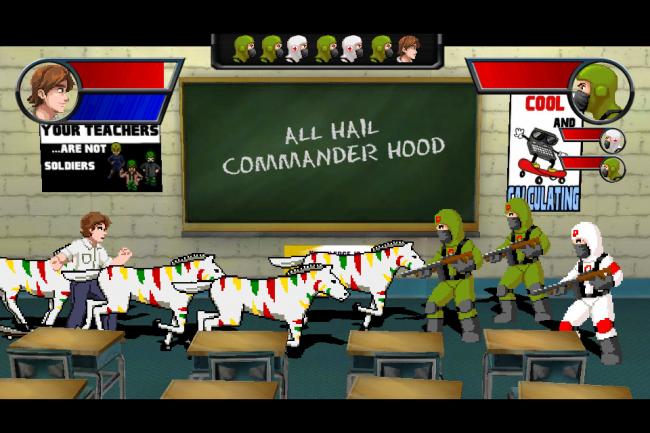 As you might expect, additional quests are given by various NPCs, and Marty’s helpful notebook keeps everything organized, just the way Mead intended. Red and blue arrows point the way toward objectives for the main and side missions, respectively, but one thing Saturday Morning RPG could probably use is a better map. Any map, actually, unless making players remember their way back was part of the retro design.

That’s quite possible given the fact that the graphics are decidedly old school, though the pixelated style fits the game’s theme to a tee. One place the developers didn’t skimp was with the music, as they tapped Vince DiCola, who scored movies like Rocky IV and Transformers: The Movie, to help out. His awesome, synthesizer-driver soundtrack is definitely one of the game’s highlights.

Finding all of the references is certain to be a favorite talking point for gamers too. Mighty Rabbit did an excellent job working in tributes to all kinds of intellectual properties from the 80s. It’s a satirical take, for sure, but one that has players laughing along with their childhood memories, not at them. 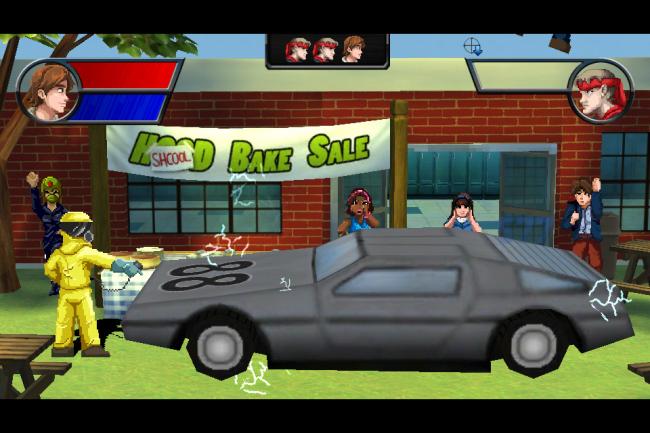 More is on the way, too, since Saturday Morning RPG is designed to be played in episodes (stored on VHS tapes in the game, naturally). Episode 2, which also released at launch, suggests that Marty may not have dreamed up the whole thing after all, switching gears to an anime/JRPG set-up where Hood’s goons have infiltrated the school – despite posters that read “Your teachers are not soliders!”

Without getting into spoiler territory, anyone who can’t figure out who the bad guys are supposed to be spoofing by the end of the second episode was probably born after 1990. Marty keeps his stats and items from one episode to the next, and he can be taken back fully powered up into the old ones to finish off any missed quests, so there’s some definite replay value.

That’s a good thing, since replaying is kind of the point of a walk down memory lane like this. Even with tongue planted firmly in cheek, Mighty Rabbit proves that you don’t need a $250 million dollar budget to keep warm memories of the past alive. Saturday Morning RPG has heart, and in any kind of pop culture, that’s the most important part.