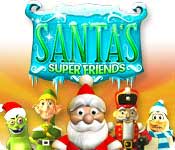 Mr. Stink goes where the Grinch and Scrooge have gone before him, attempting to ruin our holiday spirits. Stinky steals Santa’s toys right before Christmas, but we’re not going to let the children down. So with a little help from our super friends, we’re going to make more toys even if the conveyor belt in Santa’s Super Friends makes us as insane as Lucy and Ethel at the chocolate factory.

Santa counts on his loyal friends, known as Santa’s Super Friends, every year to build the toys for all of child-kind. Unfortunately, one of the Super Friends, Stanley Reek, stunk of smelly cheese which leaked onto the toys, bringing the children to tears. Santa asked Stanley to stop making toys for the children’s sake, but Stanley didn’t take kindly to that as he believed he was the best toy maker.

After hiding for a year Stanley, returned the day before Christmas to steal all the toys. So, with little time to spare before the big day, the task is to work with each Super Friend to make more toys super fast. The goal for each level contains the number of presents to make. Bits and parts of the toys rest on the conveyor belt where you must match up the right pieces in the correct color to complete the toy. You receive bonus points whenever you match the elf’s request (such as creating a green teddy bear).

However, in later levels, you probably won’t care about the elves’ request as it’s tough to keep up with the parts coming and going in two directions when there are two conveyor belts going – later there will be three! And this happens in the later levels of easy mode. Not only are there three levels of difficulty, but also the game’s difficulty increases the farther you progress. Talk about insane! If a part reaches the end of either belt, that’s it. You can try, try again.

Fortunately, during the frenzy, helpers and bonuses show up on the conveyor belt. It’s the helpers that keep on surprising and delighting players and their super friends. Put two pieces of a helper together can reverse the conveyor belt, slowing it down. The magnet – the best one – attracts all available pieces on the belt and automatically puts together a toy, or as much of it as possible if all the pieces of the toy aren’t present yet.

The toys change, so once you get the hang of all the parts of a rabbit you’ll start building together robots, monkeys or some other toy. Not only do you need to make sure a toy gets one of every part, but you must also put the right colors together as the number of colors grows with the levels. Thankfully, no level contains more than one toy to put together, just like in a real-world factory.

Frustration sets in when mistaking the magnet for the question mark, which only adds one piece. The situation grows worse when clicking on a piece, then an associated piece, and then a third piece. After all this work, you find out that only the second and third pieces connected missing the first entirely and losing the chance to complete a toy.

Occasionally, pieces that look like they’re from the Trivial Pursuit pies show up on the conveyor belt. These are parts of ornaments that will go on the bonus Christmas tree. Depending on how quickly and successfully you complete a level, you can earn a bronze, silver or gold star for your performance. It’s not clear what the difference is between gold, silver, and bronze. Santa’s Super Friends has a tutorial at the start of the game, but there is no help included if you need a refresher or more information.

The conveyors can go slightly off the screen blocking the view of the toy in progress. This could hide critical information as to which piece you need to complete the toy. This problem becomes most annoying in the later levels when things flurry, and you can’t be sure what you need to finish the toy. As for the music, it was tolerable at first but then became distracting and overpowering like hearing elevator music for too long.

Survival mode simply means endlessly making toys until a part reaches the end of the line, seeing how long you can go before the conveyor belt wears you down. Some people don’t like endless mode since it’s repetitive and frantic. Santa’s Super Friends is no different. The story in Quest mode is cheesy and the super friends could stand an upgrade in their disguises as their graphics quality isn’t as good as that of the toys.

If the screenshots look very familiar, then you’ve probably played Teddy Factory, also from Toy Box Games. It makes sense to create a holiday-themed version of a popular game. However, other than changing the theme and adding Christmas tree ornaments as a bonus, Santa’s Super Friends isn’t much different. So if you’ve already played Teddy Factory be warned – you can expect more of the same.

The snow, the toys and the friends will put you in a holiday mood, but the music and frenzied pace could take that away in seconds. It’s an entertaining game with a few irritating points. Playing it for an hour should be enough to decide whether game is naughty or nice.