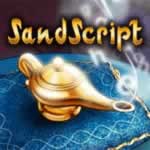 Many of you likely have fond memories playing Hangman as a kid, be it playing against a friend during a boring day at school or doodling on an airplane napkin with a sibling to stay entertained on long flights (before laptops, iPods and portable DVD players!).

You know the drill: you must guess what a word is – represented only by dashes – by picking the right consonants and vowels. For example, _ _ E _ RY, will likely be THEORY. Incorrect guesses result in a new limb attached to a noosed hangman dangling from the gallows (yes, perfect for children!); if your opponent draws the hangman’s head, it’s game over.

This popular word game became a hit on TV with Wheel of Fortune, and now its poised to take on cyberspace with SandScript, a fun Hangman-like word game for savvy spellers.

With its clever Arabian theme instead of a hanging stick figure, gamers must help a hapless genie restore his magical powers by spelling words correctly – and before his magic carpet carries him off the screen. Players use the mouse to click on the alphabet to guess the letters that make up the word; the genie also provides clues along the way, such as “object, complain, demonstrate against” for the word PROTEST. In total, the game houses more than 13,000 words in its dictionary, so don’t expect much repetition.

If gamers perform well, such as choosing many correct letters in a row, this lets you choose one of the three helpful “charms” (hints) in the game. One is to reveal all vowels in the word, a second reveals one letter in the word for you and the third shows you five letters in the alphabet are not used in the word. Use these charms sparingly!

After a few of these levels in the Genie’s Quest mode – which by the way, lets gamers travel from the Lonely Pyramids, through beautiful oases, to the Ivory Palace on a board game-like screen — gamers will be able to play a bonus game called Sultan’s Challenge. Think of it like a Jumble from your local newspaper, where a scrambled word is presented and you must guess what it is by typing in the letters. So, LGOOPIN becomes LOOPING. You can choose between three and seven letters; the longer the word, the more points you will be awarded for guessing correctly.

Speaking of awards, players can pick up special badges, ribbons and other accolades to show off in a trophy room. For example, if you solve ten consecutive words without making a mistake you get a “10X Perfect” silver coin.

The Genie’s Quest mode is made up of 80 main levels, plus players can choose to play the Sultan’s Challenge game (for Text Twist and Jumble fans, perhaps!) or a third option, 1001 Nights, an “endless mode” that challenges players to see how many nights (words) they could decipher consecutively.

Only thing missing here is a more relaxed mode where you can play Hangman without fear of running out of time.

Other beefs include a fairly easy game that takes a long time to get challenging, no Mac support and just 30 minutes of “try before you buy” play (60 minutes would’ve been better).

Overall, however, SandScript is a fun word game that combines Hangman and Jumble games all wrapped into an enjoyable Arabian theme. And thanks for reading our review on GA _ _Z _ _O!