By AJ Dellinger | 11 years ago 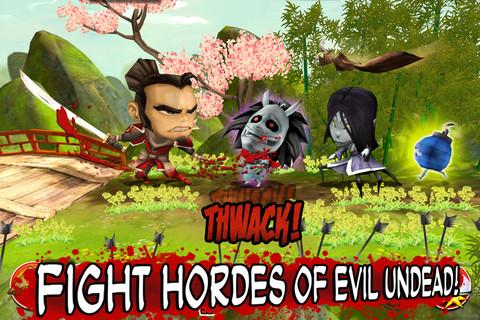 Samurais and Zombies and Castle Defense, Oh My!

It’s tough to stack the deck against yourself any worse than Samurai vs Zombies Defense did. A game with zombies? Been there. How about samurais? Done that. Maybe castle defense gameplay? Overdone. There’s a freemium purchases model? I’ve got enough places to drop dollar after dollar in micro-transactions into, thanks. So what does Samurai vs Zombies Defense have going for it? Well it’s pretty great fun, so there’s that.

Samurai vs Zombies Defense puts you in the shoes (do samurais wear shoes?) of a heroic samurai who has sworn to defend the gates of his sacred village against the oncoming horde of attackers. That onslaught just happens to be coming from swarms of zombies, because who else would attempt to blitz an ancient land aside from some very ancient enemies?

The controls of the game are the definition of simple: Hold to the left of the screen to go left and to the opposite for right. Your additional power-ups and ability to call in reinforcements sit on the bottom of the screen and can be conjured up with a single touch.

Basic combat is handled automatically once you’re in range of an enemy. Any zombie at a distance will feel the piercing of an arrow, while undead attackers that make the mistake of getting up close and personal with you will meet the sharp side of your sword.

The core gameplay of Samurai vs Zombies Defense draws heavily from most castle defender style games, where you are placed between the end point that you’re attempting to protect and the ever-persistent hoard of on-comers that have no goal other than destroying the one thing you’re guarding. Every round brings a challenge of more enemies, new forms of undead, and the occasional boss fights that you’ll attempt to survive – which, it should be noted, are pretty epic.

While the task of taking on an undead dynasty may seem taxing, you won’t have to go it alone. Aside from being armed with a bow and arrow and a powerful sword, you’ll also gain help in the form of summonable samurais that will join in your fight. Archers, swordsmen, warriors, and eventually even riflemen and heroes on horseback will aid you.

Aside from helping hands, you’re also armed with a few powers of your own that will thin the horde when it gets a little overwhelming. A powerful slash attack that cuts through several zombies at the same time will inflict a considerable amount of damage on those rude brain eaters that invade your personal space, while a lightning attack will zap a crowd and keep them at bay. These attacks take some time to recharge, so you’ll want to use them sparingly.

As a reward for taking out the rotting flesh that pushes forward toward your village, you’ll earn coins that will be used for upgrading your own arsenal. The currency of gold coins will buy you anything from health boosts to upgrades for your fellow fighters. The more zombies you kill, the more coins you collect. But it’s not the only way to play.

Like many iOS titles nowadays, there is a second form of in-game tender that is purchasable with real-world money. In exchange for your cash, you’ll get gems which can be used at the in-game store. While it’s arguable whether this just allows players to buy their way to victory, you can easily play and enjoy Samurai vs Zombies Defense without spending a single dime. 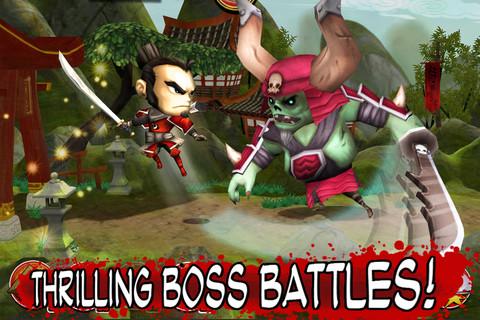 If you do make the decision to spend a little cash on this title, you’ll be able to earn upgrades faster and purchase special power-ups that are otherwise unavailable (i.e.: double coins forever). I can’t stress how totally unnecessary these buyable add-ons are as the game really isn’t that much of a challenge, but that said, the Glu Games team certainly deserves a few bucks for all their efforts in developing such a fun game.

While you can buy your way to rare items, you can also take your chances at a little mini-game called pachinko. It’s a strange slot machine that you’ll drop balls into in hopes of having it land on a desirable outcome. It’s a fun little twist on earning upgrades and gives an added layer to the otherwise straight-forward gameplay.

Aside from the pachinko machine, there’s nothing inherently unique about Samurai vs Zombies Defense. The game is everything you’d expect from a castle defense game that just happens to focus around the struggle between two unlikely enemies. While it’s not necessarily anything new, it’s definitely one of the better titles in this genre that we’ve seen. The controls work great and you never feel lost, even in crowds of zombies, and with the occasional upgrade and some light tactics, you should be able to keep the swarm of walkers away from your gate. Even if the normal levels are a little on the easy side, the boss battles are more than rewarding and an absolute blast. Overall this is a fun title with a foot in enough niches that it could have easily gotten stuck in the mud, but instead manages to be an enjoyable experience. Grab this game and send the zombies to their grave …again.