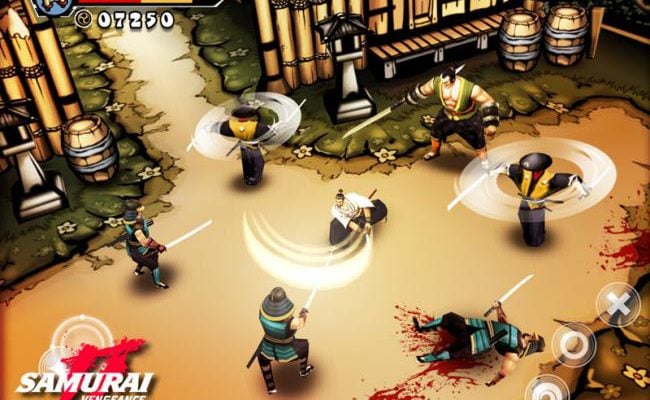 Samurai II: Vengeance is quite possibly the perfect action sequel.

Tales of the samurai in Japanese culture have been a great source of inspiration for the American western. It should come as no surprise then that, like Samurai: The Way of the Warrior before it, Samurai II: Vengeance plays out like an American western in feudal Japan. It’s a tale of revenge, action, and most importantly, how to make an exceptional sequel.

Picking up after the events of the original Samurai (don’t worry – you don’t need to play the first to understand the second), our hero Daisuke sets off on a quest for revenge as he pursues his arch-enemy Orochi. Told through comic-style cut scenes between levels, the story serves as little more than a backdrop for the hack’n’slash mayhem that unfolds.

Moving faster and fiercer than its predecessor, Samurai ends up feeling a little like a God of War game for the iPhone. Players will slaughter their way through hordes of enemies in their pursuit if Orochi – but if this is beginning to sound a little too much like the original, don’t worry. Samurai II makes some pretty drastic changes, all of which are for the better. 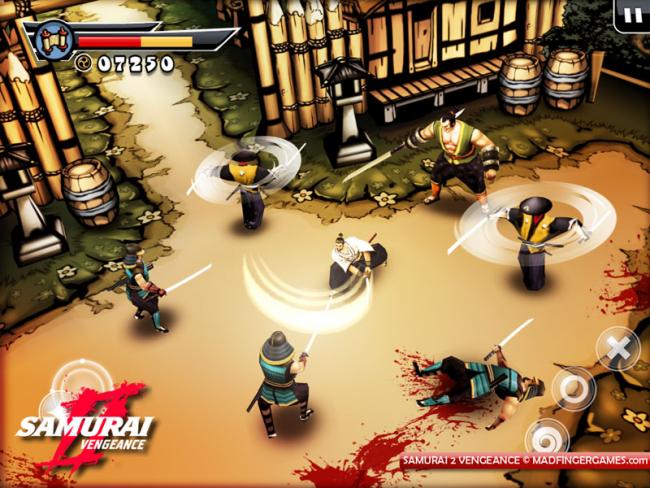 The biggest change to the formula is also the one we were most surprised to see. When people remember the original Samurai, the first thing that comes to mind is its unique control scheme. Players would control both the movement and the combat with a simple swipe of the finger. Most people would argue that these controls were the very heart of Samurai, yet the swiping mechanic has been completely purged from the sequel.

Instead, Samurai II offers a relatively common on-screen directional pad and button system. While that may sound blasé, if not outright blasphemous to fans of the original, we found the new control scheme to be far more comfortable and intuitive than what came before. It’s a good thing too, because with the action moving quicker, the enemies smarter, and the number of baddies you’ll tackle at once infinitely larger, you’ll need controls that react exactly as you want them too.

Quick and precise movements may be a part of what makes these controls such a success, but the biggest improvement with this new layout is how reliably you can bust out combos. In the original Samurai, our biggest gripe was that pulling off combos with a series of swipes always seemed to be a hit or miss proposition, and when they didn’t happen it was impossible to figure out why. Thanks not only to the reliable button layout but also to a small display window that shows which button presses have registered towards the combo, the combat in Samurai II becomes a deeply more satisfying experience.

As with everything else here, the combo system has undergone something of a revision of its own. While you’d previously unlock new combos seemingly at random, there’s now a shopping system that will let you purchase new moves using the points you’ve accrued from slaughtering villains and busting barrels. 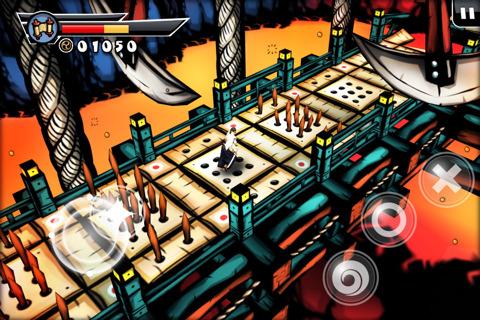 Visually, Samurai II is absolutely breathtaking. Taking the Japanese water color presentation of the original, Madfinger Games has again built upon what’s come before and added a level of detail that’s unprecedented, moving the game’s look from cool background art to a living breathing world. The character modelling is much improved this time around too, with greater variety in enemy appearances and far more detail going into each character.

The enemies are varied in more than just their appearance, too. Expect to see smarter bad guys who are far more eager to block your attacks and chase you down. And now the danger doesn’t just come from the enemies, either. Environmental hazards like giants wooden wheels adorned with sharp blades, swinging axes, or bamboo shooting up through the floor are always getting in the way while you’re trying to dance around half a dozen rivals. Situations like this are exactly where the improved controls really shine.

Like its predecessor, however, Samurai II offers up a somewhat gory presentation that’s not for the faint of heart. Blood splatters with every slice of your sword. Pools of the red stuff stain the floors after your slaughter. If you can manage to pull off a particularly brutal kill, you can even slice an enemy in half or cut their heads clean off. If you can’t stomach a Tarantino level of blood, you’ll probably want to steer clear of this one despite its sublime action gameplay.

The original Samurai was a work of genius to be sure, but Samurai II leaves its predecessor feeling like little more than a tech demo. An improvement on the original in every way imaginable, Samurai II: Vengeance accomplishes what too few sequels manage, offering up a completely fresh experience while building on everything that made the original so great. If you’re an action gamer who doesn’t mind getting a little bit of blood on his screen, consider this one a must buy.