Hikaru is having a bad day. When she woke up this morning, she was a mystical princess who lived in a fantastic castle. By dinner-time, though, she was homeless, fatherless, and suffering from a serious case of revenge. Needless to say, Samurai Girl starts out pretty intense and doesn’t let up.

The plot is the standard “powerful hero with no memory” story, but with a bit of a twist: players are told who they’re playing and get to see her suffer the head trauma that leads to her amnesia. The story centers around a princess named Hikaru, whose home is destroyed and father is killed by some villains who are in pursuit of a mystical sword. Hikaru tries to avenge her father, but is instead knocked off the mountain she lives on, lands on her head, and forgets everything but her name. Nursed back to health by a mysterious swordmaster, she begins the long road towards recovery and revenge.

Samurai Girl requires players to grind through combat and complete various quests. Both provide XP rewards, which are used to level up special abilities and attributes. New equipment, meanwhile, can be purchased from in-game vendors; but in-game gold can be purchased with real money. The combat starts to feel a bit repetitive after a while, mainly because it takes so long to find enough acquire enough gold to pick keep on acquiring better gear and healing items.

On top of all this, Hikaru soon begins to raise a phoenix, which is actually incorporated into gameplay. Players have to purchase various meat products from local shops to help it grow big enough to carry the girl to areas that she normally wouldn’t have access to if she was traveling on foot.

A virtual D-pad on the left side of the screen controls Hikaru’s movement; pressing up allows players to access gateways that take them to new maps, pressing down blocks attacks and hazards. On the right side of the screen, there are four buttons that are used for jumps, attacks, and special moves.

For the most part the controls are pretty smooth, but they take a little while to get used to. In the tutorial it’s implied that multiple taps are required to accomplish double-jumps and attack combos, but it turns out that just holding down on the associated buttons will get the job done. On top of that, things feel a little incongruous at times, like with how players are required to press the attack button to interact with other characters instead of pressing up on the D-pad. 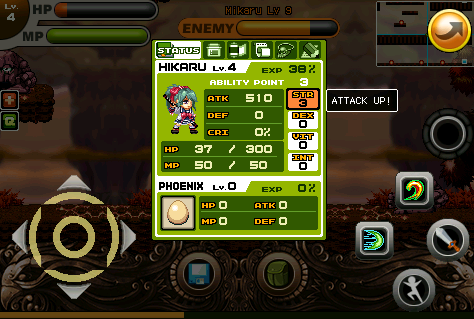 The game’s visuals hold a lot of charm for anyone who grew up playing 2D adventures as part of the 8/16-Bit Generation. Characters are cute, environments are varied, and the animations are surprisingly smooth. Levels are broken up into reasonably-sized maps, which are fairly easy to navigate thanks to an easy-to-read minimap that appears on screen.

The minimap is even more of a blessing than it first appears. Tapping on it will bring up a layout of all the game’s levels and dungeons, showing how they’re connected to each other. This is especially useful when a mission tells players to go to an unfamiliar area, because it shows where to go and how to get there.

Samurai Girl is an interesting blend of a single-player RPG with some MMO-like mechanics. It’s got an epic and well-told story, but the grind-heavy gameplay will like turn off some folks. That said, it’s got an impressive level of polish and is certainly worth checking out.