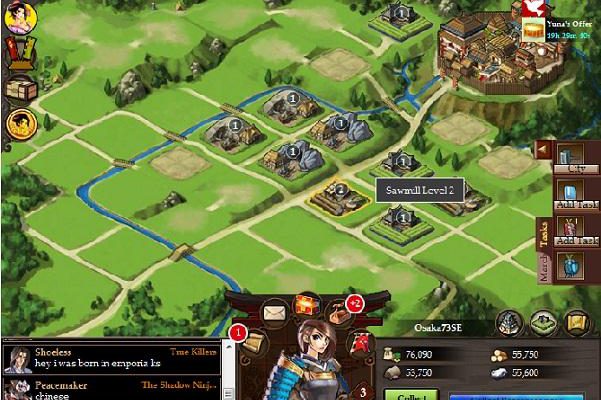 Aside from a new theme, Samurai Dynasty doesn’t offer a whole lot new for strategy fans

Samurai Dynasty is a Travian-like game, like most strategy games on Facebook. As you might guess from the name, it introduces a medieval Japanese theme as a way of distinguishing it from the countless other medieval Europe-themed games in this genre. Samurai Dynasty also uses a more graphically rich interface than is typical for this sort of strategy game, including a play avatar and plenty of useful sidebars in addition to the typical icon animations. In Samurai Dynasty your goal is to develop and defend a thriving city, then build new expansion cities to increase your empire. You can develop up to eight cities.

The Japanese theme doesn’t change anything substantial about basic gameplay in Samurai Dynasty. Quests guide you through setting up your first city, building up your army, and beginning to conquer territory. The farther into the game you go, the deeper and more complicated playing it becomes. Still, the progression in Samurai Dynasty is basically identical to what you might encounter in, say, Kingdoms of Camelot. The main differences are minor ones that play on the theme. You build a sumo ring to increase your population’s happiness, a daimyo’s hall to house artifact sets, and a geisha house to boost troop movement between allied cities. 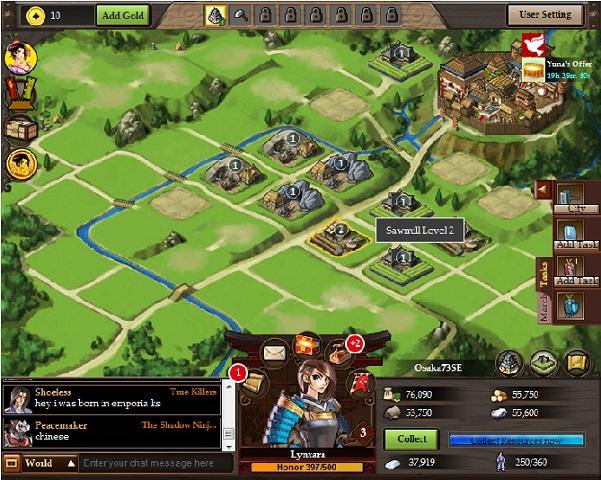 Samurai Dynasty monetizes through sale of virtual goods for real money. Like most games in this genre, it’s fairly aggressive about trying to get you to buy speed-up and luxury items while being perfectly playable without them. More than other games of this type (even ones published by Kabam), Samurai Dynasty is generous about letting you earn cash shop items through gameplay events like daily lotteries and as quest rewards. You can also get friends playing the game to click on wall posts to reduce building time, which is fairly standard.

Other features offered are fairly standard ones, as well, albeit spruced up a bit by Samurai Dynasty‘s graphics-heavy presentation. You can join guilds and chat with other players in a graphical environment that will display their avatars. A drawback to the graphics-heavy approach is that Samurai Dynasty actually has a minimum bandwidth requirement. If your connection is unable to meet the requirement, then pages that should load as part of gameplay simply won’t. You’ll instead get an error page and won’t be able to proceed until you’re able to successfully reload the game. 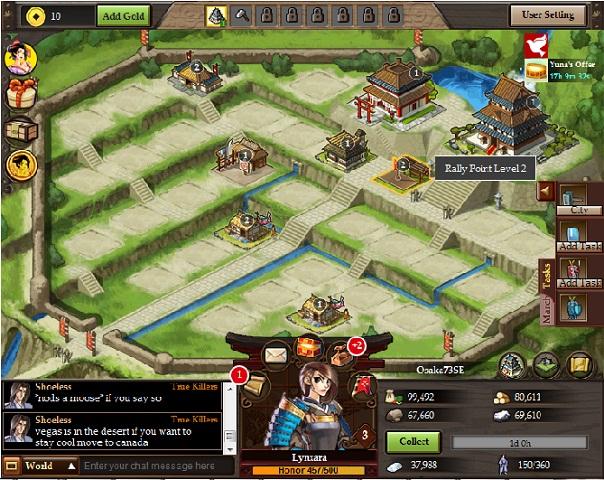 Samurai Dynasty may not be appealing to a player already deeply engrossed in a similar game like Kingdoms of Camelot, but it’s a game that should be fun for players new to Facebook strategy or interested primarily in the Japanese theme. It’s a very solid and sturdy take on the genre that offers a lot of enjoyable flavor, if not a lot of truly new features. Few Facebook developers have chosen to specialize in a single genre the way Kabam has, but games like Samurai Dynasty show how experience pays off.