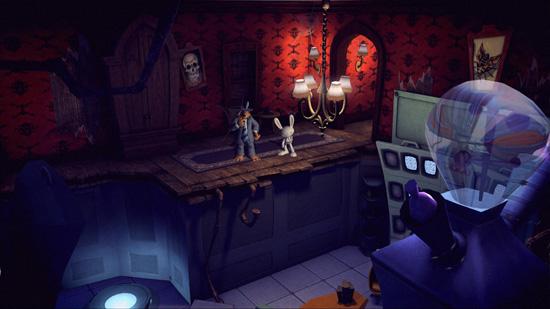 Space gorillas. Psychic powered toys. Bunnies transforming into guns. Yep, it’s time for another season of Sam & Max. Returning for their third season of quirky crime solving fun, the duo find themselves in what might be their most bizarre predicament yet. Packed with some great ideas and the series’ trademark humor, The Penal Zone, the first episode of the brand new season The Devil’s Playground, is one of the most entertaining episodes yet for the long running series.

The Penal Zone starts at the end, showing the titular freelance police duo fighting an evil space gorilla using a number of strange powers. It’s all very confusing and it’s meant to be: after all, how can you understand the end of a story without having experienced the rest of it? But soon enough the game jumps back to the beginning and things become a little bit clearer. An alien has landed on Earth in search of a number of magical toys, which, when used by someone with psychic abilities, are very powerful. And it just so happens that a certain little psychotic bunny named Max has recently discovered that he has psychic powers.

As you’d expect, it falls upon Sam and Max to save the day and rid the planet of the evil talking gorillas. Like the rest of the games in the series, The Penal Zone is dialog heavy. You’ll be spending a lot of time talking to other characters, and you’ll have to ask the same questions two or three times in order to get all the information possible. Thankfully, the writing in the game is excellent, featuring plenty of the irreverent and downright strange humor that the series is known for. And it’s all wrapped up in a charming, Twilight Zone style presentation.

The game plays identically to the rest of the series, as well as other Telltale games like the Tales of Monkey Island and Wallace & Gromit’s Grand Adventures series’. You can move your character around using the keyboard and interact with the world using the mouse. You’ll be collecting numerous items as you move along, which you’ll need to solve various puzzles. All standard adventure game fare. But the twist this time around is Max’s new found powers.

At any point in the game you can switch over to control Max and use any of his available powers. The most important of these is the ability to see into the future. If you’re stuck at any point, you can simply don a pair of magic goggles and take a look at how a particular situation will end. This provides valuable insight, giving hints at you how you can proceed. It tells you what needs to be done, but it’s up to you to figure how to go about doing it. For the most part this is fairly simple, as The Penal Zone is a surprisingly easy game, but there are a few puzzles that will leave you scratching your head for a bit. 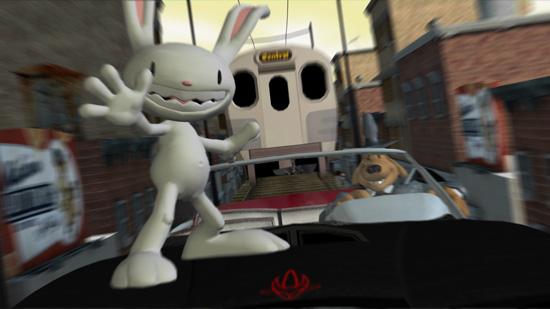 In addition to his precognitive ability, Max will also learn how to both teleport and transform into almost anything. The teleportation is a great feature, as it allows you to move to different locations throughout the game very quickly. The transformation, meanwhile, is used very smartly in several of the game’s puzzles. Overall, Max’s psychic powers represent a refreshing twist for the series. It’s hard not to get excited to see what new abilities he’ll learn over the course of this third season.

Visually, the game maintains the stylized 3D look of its predecessors. But the new psychic abilities have given the developers a chance to experiment a bit. When Max uses these abilities strange filters are used, making everything look distorted and surreal. You’ll see random objects floating around and other oddities: the first time you venture through Max’s mind is, as you’d expect, a rather unsettling experience. The changes are subtle, but they do a good job of setting the tone for The Devil’s Playground.

You’d think that after two seasons and 11 episodes, it’d be hard to keep up the momentum that has made the Sam & Max series such a hit. But somehow, the developers at Telltale have kicked off The Devil’s Playground with an incredibly imaginative first episode that is arguably one of the best yet. The alien invasion story line is wonderfully funny and quirky, and the new special powers help reinvigorate the well-worn gameplay. If the rest of the season can keep up this level of quality, we’re in for one heck of a ride.